The Midtown Donut is Filling In 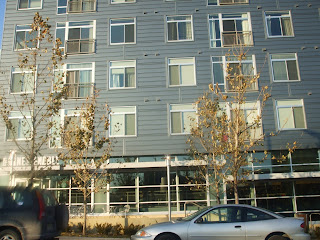 Mount Vernon and Bolton Hill, it seems like they're worlds apart. In actuality they border on each other with Howard St. serving as Bolton Hill's eastern edge and Mount Vernon's western edge. The reason one would think they're not close together is because of the no man's land that expands east to west from Charles St. to Dolphin St. This expanse of land I have called the "Midtown Donut" why that name? I call it that because it's surrounded by gentrification and stately old Gentlemen's Communities that have taken on a Collegetown vibe and this expanse of land is in the middle hence the Donut reference. Luckily after decades of just talk about what to do with the Donut there are signs of life appearing and the Donut may be finally filling in. 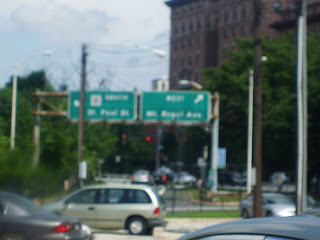 The Donut could be traced as far back as when Johns Hopkins University moved to its Homewood Campus a few blocks Uptown. I contribute the real loss of population and vitality to the area came post World War II during the flight to the suburbs. Both Mount Vernon and Bolton Hill defined their boundaries in which they would "weather the storm of urban decay and blight" which they were successful in however, neither Neighborhood nor the development of the equally closed off Charles Center included the Donut. Decay and blight did not encroach on the Donut but it's remained stagnant and poised for change for quite some time. This change has been all too prevalent in Bolton Hill and Mount Vernon thereby making the contrast in the Donut all the more obvious. 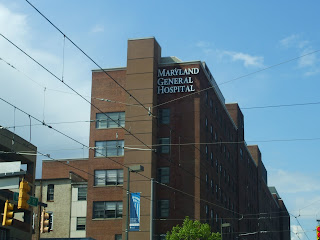 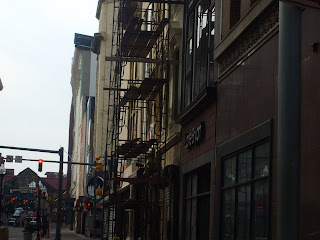 The pedestrian only "Lexington Mall" is however slated for demolition and there have been plans to build luxury condos over top of a parking garage across from Lexington Market. These plans have been shelved due to our current economic crisis. I have always thought that the best way to continue the Westside's renewal would be to continue from the north i.e. the Donut and have the success of the south ( Camden Yards Hilton) push towards each other instead of stubbornly pushing the Westside north. Luckily one project in the Donut is nearing completion and another bigger one has been green lit. 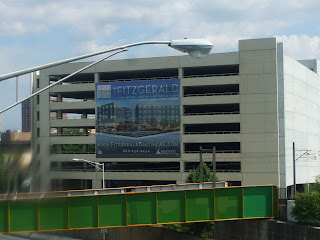 The first project, (completed picture at the top of the post) is known as the Fitzgerald. It doesn't compare in size to say Patrick Turner's Westport but it's more the symbol that a developer and a major bookstore chain (Barnes & Noble) have committed to the area. As part of the Fitzgerald, there is space for additional ground floor Retail and Apartments above and an attached parking garage. It's only two blocks away from Penn Station on the stub known as W. Oliver St. 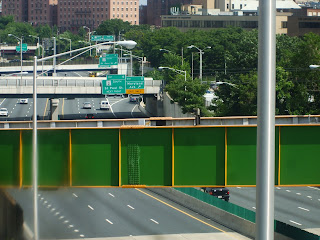 I'm not the first person to pitch this next idea but I agree with it and I'm going to write about it because it's relevant. Another project like the Fitzgreald could go in the block in between the Fitzgreald and Penn Station. What needs to be done is to have the ramp from the JFX to Maryland Avenue made into a narrower ramp instead of the loop around that it currently does. This would free up much needed space for development and truly connect the Fitzgerald and therefore the Donut to Penn Station. Speakng of Maryland Avenue, for a one way street with so many lanes, it's under utilized when compared to St. Paul St. just two blocks to the east. 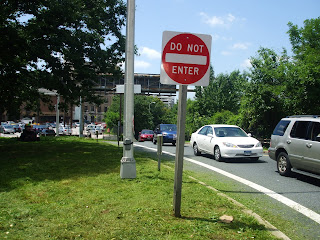 If you're going to assume that I next propose to close off the JFX St. Paul st. ramp you're absolutely right. With some of that extra traffic diverted from St. Paul St. to Maryland Avenue, the Donut will receive more vehicular traffic and therefore get the attention of developers in the future. Meanwhile, the Fitzgerald with its Barnes and Noble will create life among the Colleges that flank the area. 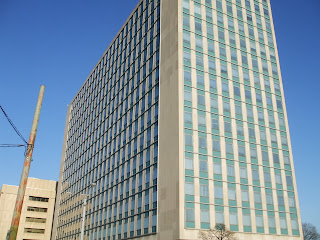 The Fitzgerald isn't the only project for the Donut. Although construction won't be for another few years, the State has committed funds to redeveloping the State Center. This has been long discussed and was ready to go when the economy fell through the cash strapped State of Maryland put this on the back burner unsure if it would ever get the needed funding. Fortunately, the State has loosened its purse strings and has decided to fund the redevelopment knowing that it would pay off in the long run. This past summer the decision was made to go ahead with it. The original State Center project included McCulloh Homes, a troubled Public Housing Development next to the State Center. This was scraped early on in the planning process but I do think that McCulloh Homes' time has since past. 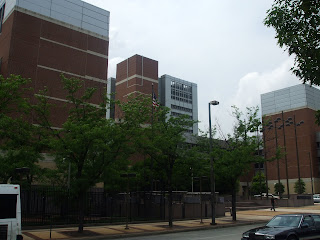 To completely fill in the Donut not only will McCulloh Homes have to be redeveloped but the behemoth Social Security Building and its equally intruting parking garage. This will not only fill in the Donut but will provide the Westside of Downtown with a large redvelopment project that will act as a catalyst for its future projects.
Posted by Spence Lean at 10:13 PM

This is an informative post and it is very useful and knowledgeable. therefore, I would like to thank you for the efforts you have made in writing this article.
Renovations in Pimlico