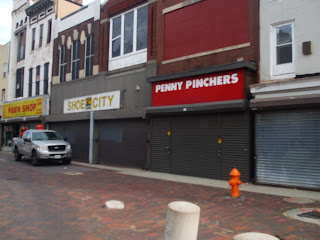 There may be some overlap between this post and a series I did several years ago called "Reopening the Great Northeast" but at the same time I have re tweaked some of the nuts and bolts as I continue to educate myself and my ideas evolve. No series on East Baltimore can be complete without discussing the traffic patterns in and around Oldtown Mall. Right now it isn't great. Gay St. ends at Orleans St. and doesn't start again until just above Broadway. Hillen St. and Ensor St. are both very wide considering they're both one way streets. Above Aisquith St. Harford Avenue (which is what Hillen and Ensor turn into) becomes one way going Northbound until it meets North Avenue. Like its Hillen St. and Ensor St. counterparts to the south, Harford Avenue is also very wide. I personally believe all of these streets and the traffic patterns associated with them make for a confusing and inefficient grid of streets that contributes to the lack of progress around East Baltimore. I would like to address these issues by declaring five words; Make Way for Gay St. 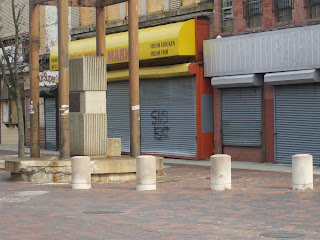 As the name of this post suggests, I would like to reopen Gay St. This matter has been discussed quite often from shareholders invested in the dying Oldtown Mall. They believe that closing off Gay St. and making it a pedestrian mall was a big mistake. I defy you to find anybody that disagrees with that logic. A portion of Howard St. was closed off and that killed the Westside of Downtown as did the closing off Lexington St. just west of Charles Center. Howard St. has long since reopened and Lexington St. will reopen shortly if it hasn't done so already. The Oldtown Master Plan does call for Gay St. to reopen but only a tiny portion of it. The plan only shows Gay St. being reopened between Forest St. and Aisquith St. Personally, I don't see how this revitalize Oldtown Mall and the rest of the Neighborhood as a chain reaction. That is why we must make way for Gay St. 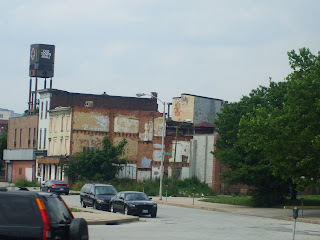 Gay St. begins at the Inner Harbor at Pratt St. It goes north for a few blocks as a one way street and then turns northeast intersecting the JFX. You can exit Gay St. and go northbound on the JFX if that's your destination. Continuing along Gay St. you will see the Baltimore City Fire Museum straight ahead which is the beginning of Oldtown Mall. Oldtown Mall begins at Orleans St. and this is where Gay St. currently ends. All traffic bares a slight left to go onto Ensor St. rather than driving through Oldtown Mall. Ensor St. will eventually dump its traffic onto Harford Avenue. Now I'm going to get rid of Ensor St. all together. Traffic on Gay St. will continue along Gay St. straight through Oldtown Mall. Given that this is a narrow stretch of road there won't be any shoulders or on street parking for Oldtown Mall along Gay St. Oldtown Mall (reopened Gay St.) lets at Aisquith St. at Monument St. In the Oldtown Master Plan, this is where Gay St. would end. This isn't the Oldtown Master Plan this is my plan and I'm going to continue Gay St. 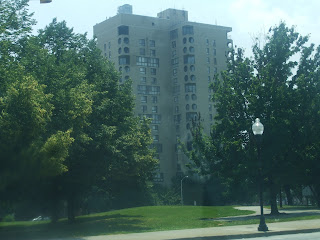 In order for Gay St. to continue past Monument St. a few things would have to happen. First, Aisquith St. will have to end at Gay St. Second, the Monument honoring Henry G. McComas will have to be moved to the Dunbar Athletic Field, and finally a traffic light will have to be installed at Gay St. and Monument St. Gay St. will then cut through the eastern edge of the Dunbar Athletic Fields where a new roundabout at Gay St, Madison St, and Central Avenue will be constructed. Past the roundabout, Gay St. will intersect Eden St, Ashland Avenue, and Caroline St. before hitting Church Square Shopping Center. 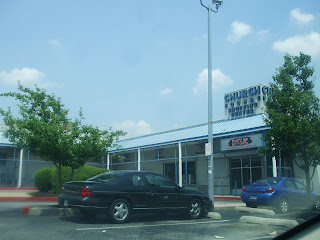 I would have loved to have redeveloped Church Square so that the new Save A Lot Grocery Store could be larger than the 22,000 Square Feet it currently is. Given how landlocked Church Square is I don't see that happening without major disruption to the surrounding area. However, between Eden St. and Ashland Avenue, the parking lot for the high rise will have to be torn down. and relocated just east of its current location to make way for the two lane one way street. The loading dock for the Save A Lot will also have to be reconfigured to make way for Gay St. 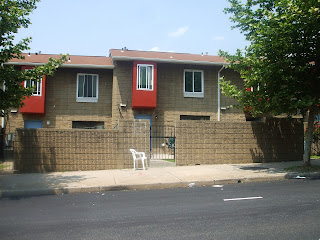 Just northeast of Church Square, is Bond St. and the titular Bond St. Apartments. Up until now there hasn't been much disruption by extending Gay St. sure move a parking lot here, move a statue there but as far as moving actual buildings goes everything has been spared, until now. The courtyard that's in the pathway of Gay St. simply isn't wide enough for two lanes of northbound traffic nor is it safe to leave the Apartment Buildings where they are even if the front doors were moved. As a result, those two buildings will have to be demolished and rebuilt in a way that Gay St. can co exist peacefully with them. Bond St. Apartments are just southwest of Broadway and Broadway is where Gay St. continues! We've made it! Gay St. is now one continuous road from Pratt St. all the way to Broadway. From Broadway Gay St. runs to North Avenue and then becomes Belair Road. On the existing part of Gay St. I would turn it into two way traffic and plant a landscaped median in the middle as well as designated bike lanes. Hopefully, this newly designed Gay St. will promote redevelopment more traffic going through the Broadway East Neighborhood which suffers from severe population loss and abandoned homes. I would love this to be a catalyst for redevelopment in Broadway East as a fringe benefit. 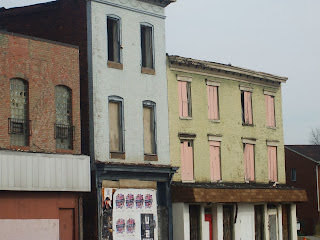 The Oldtown Master Plan calls for Gay St. to reopened from Forest St. to Aisquith St. Although I'm for that I'm also for connecting Gay St. from Orleans St. to Broadway as a continuous one way northbound street. In short, Make Way for Gay St! Stay tuned for Part II The Harford/Hillen/Esnor redesign.