Southside Marketplace: Get with the Times 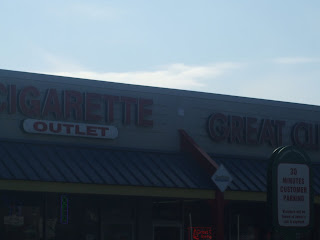 South Baltimore, for most of its existence has been home to the working class. Workers from the Bethlehem Steel Ship Yards, Proctor Gamble (Tide), The Grain Pier Elevator, Domino Sugar, McCormick Spice, and the Shipping Docks of Locust Point are just some of the major Employers of South Baltimore. Locust Point was the nation's second largest Immigration Port next to New York's Ellis Island. Workers crowded South Baltimore's many watering holes after a long hard day of work only to wake up at the crack of dawn to do it all over again. 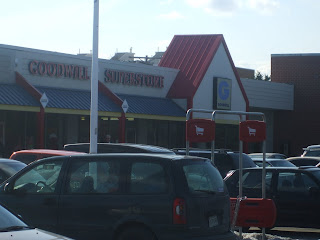 Those days have long since passed. Back then, the Corner Store was the principal outlet to do one's shopping. During the flight to the suburbs, between Riverside and Locust Point a Suburban Style Shopping Center was built. The Shopping Center was and is known as Southside Market Place. It was built at a time when South Baltimore's unemployment rate was sky high as jobs in the industrial sector were disappearing never to be found again. It's only natural that the list of tenants in Southside Marketplace catered to an impoverished clientele. 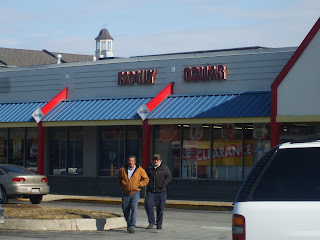 It's 2009 now and an awful lot has changed in South Baltimore since the flight to the suburbs. No, the industrial sector didn't make a comeback. In fact, it's quite the opposite. Industrial land has been bought up by rich developers and have either transformed these industrial land monuments into upscale housing or offices or have redeveloped them completely. Here's what the old Bethlehem Steel Ship Yards look like today. 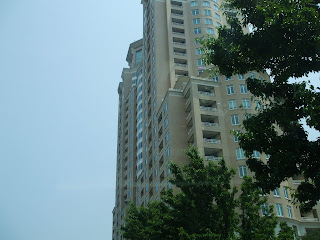 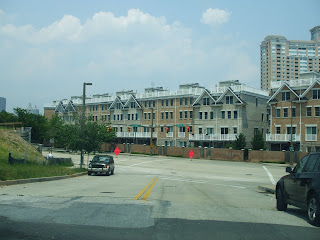 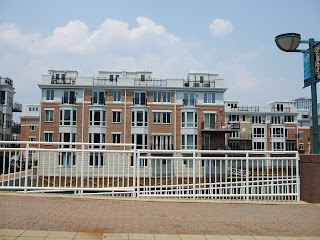 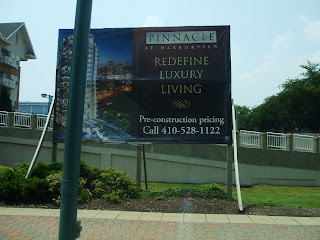 Now it's home to Harborview, a luxury low rise high rise condominium and town home development with two more high rieses known as Pinnacle 1 and Pinnacle 2 at Harborview coming down the pipeline. Want to see what's become of the old Grain Elevator Pier? 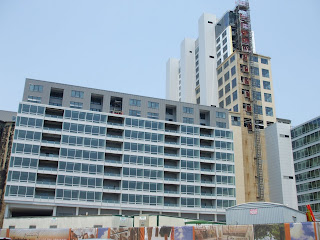 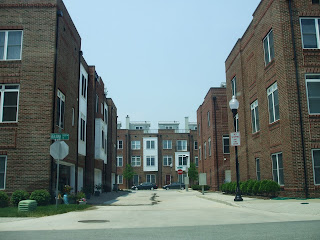 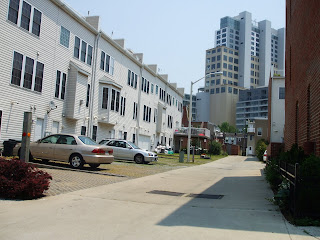 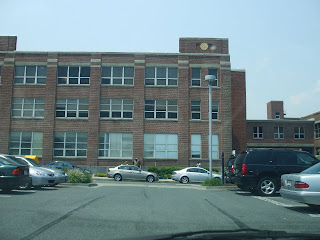 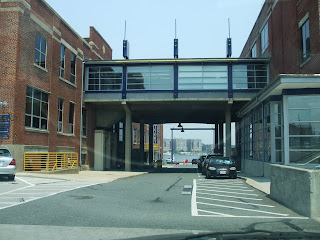 Another perservation success story! This time in the form of Offices and Retail. It's been properly named "Tide Point" for the fact that it's on the water and it housed a factory complex that manufactored Tide Laundry Detergant. There are plans to build residences on the Tide Point Property. Whether it comes to fruition we'll just have to see. Here are some more ambitious development projects that have flanked South Baltimore. 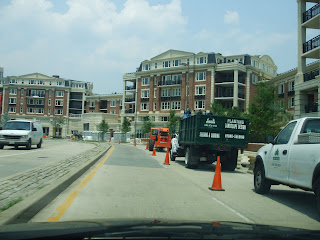 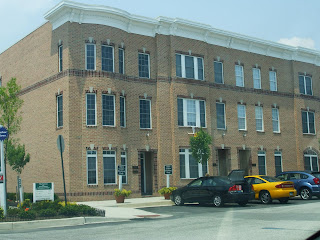 Harbour Pointe, not to be confused with Harbor Point which is the former Allied Chemical Site in Fels Point. 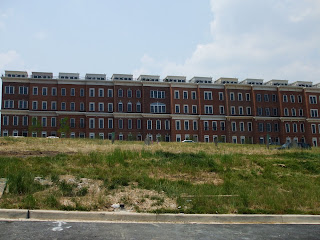 And Federal Place, whose construction has been put on hold until the Housing Market makes a comeback. The vacant land between where I took the picture and the row of homes should have already been built out. Obviously, all this new upsclae development would have a positive effect on the Tenant list for Southside Market Place...... It hasn't? 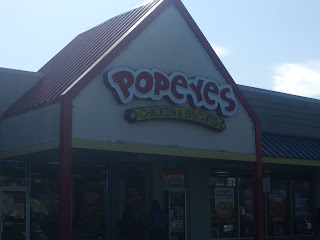 Nope, the ultra gentrification of South Baltimore (which includes the original row homes) hasn't done much for Southside Market Place. Well, I guess it's up to me to get Southside Market Place with the times. Don't worry, I've got some aces up my sleeve! Would I write this post if I didn't? 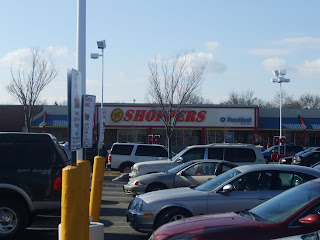 First lets start with the anchor tenant. It's currently a Shoppers Food Warehouse or Shoppers for short. It doesn't exactly scream $1 Million Dollar home dwellers. I should take this opportunity to inform you that a Harris Teeter is scheduled to be built on an adjacent lot. This will help South Baltimore's retail get with the times but it's not an end all. One up& coming Supermarket that Baltimore City lacks is a Wegmans. I think that with the new development and its high end price tags that Southside Market Place should be the home of Baltimore City's first Wegmans. This will give Southside Market Place the distinction of being "destination retail" i.e. it will draw people from far away as well as the locals. 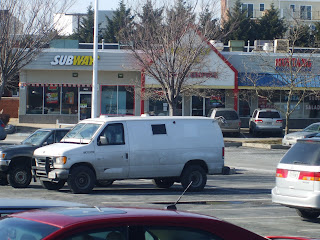 With the prototype Wegmans at a whopping 130,000 Square Feet there will be a massive expansion and redvelopment to accomodate with Shoppers topping out at 44,264 Square feet. The strip pictured above will be demolished to make way for Wegmans. Its tenants will go here. 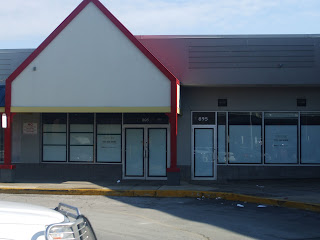 This part of the Shopping Center suffers from a high concentration of vacancies and will be filled with existing tenants whose currents spaces will be cleared to make way for Wegmans. There should also be a tenant overhaul such as replacing Family Dollar with a Pottery Barn, Lucky Nails with an upscale full service Day Spa, Cigarette Outlet with an upscale Wine Cellar, Goodwill Superstore for an Ann Taylor Loft and a Sephora. Popeye's for a Houlehans. The Rite Aid Space will be divided into several spaces that include Coldstone Creamery, Starbucks, Chicos, Gamestop, and an Art Gallery. Great Clips for Jareds the Galleria of Jewlery Goodyear for White House Black Market. Behind this strip will be a Multiplex Movie Theatre. I know this was tryed but I believe it can work this time. 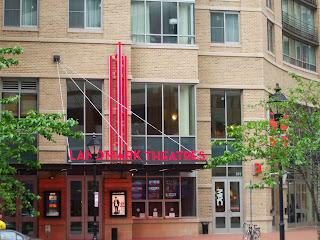 It doesn't need a wide entrance as illustrated with the recently opened Landmark Theatres in Harbor East. 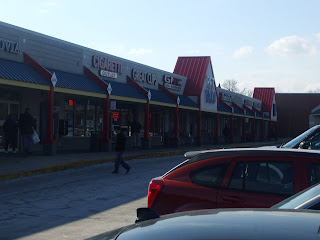 With this new line up of tenants Southside Marketplace will certainly have gotten with the times. South Baltimore has become an upper class haven. The Watering Holes have been reborn as upsclae bars and clubs that make me feel uneasy because everyone there is a 20 something with large bank account. I'm a 20 something but a large bank account? Not so much which is ironic because the Blue Collar Working Stiff (which I'm proud to be) was the demographic targeted for South Baltimore. The times have changed and Southside Marketplace has to get with them. 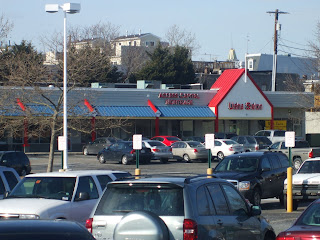 Is this something that is going to happen, or just a thought? It sounds good, but we need local places like Good Year for out local oil changes, and the food places, we dont have many but you are going to take them away. So how is Wegmants going to go up againt Teethers. Or is that store never going to come either. All that work has come to a stop ans wondering why?? It looks so crapy in our area. I dont know! I wish who ever luck, but they should ask the local Locust Point, South Baltimore people what they want!

Instead of another collection of chains that mark the Southside Marketplace as "anywhere USA" (folks can go to Harbor East for that) it would be a great place for a south Baltimore version of Belvedere Square, comprised of mostly locally owned stores/restaurants. After all, studies show that for every $100 spent at a locally owned business, $45 goes back into the community – and our tax base. For every $100 spent at a chain store, only $14 comes back (studies can be found at http://amiba.net/recommended.html#studies)

And as a regular of Whole Foods, I have to admit it's great to have Shoppers available for all the other stuff I do not pick up at the former.

I am familiar with that area over on Fort Ave.I used to shine shoes over by Locust Point when I was a kid and a teen back in the late 70's and early 1980's.I remember when that area was deserted back in those days.I am glad that area is lookin good.I wish it looked good back then.

I would like to see Baltimore City make a great comback.I probably wont see it in my lifetime.

Since the idea of mixed-income has long since abandoned that area, it would be nice if small, independent, local upscale stores that would keep more money in the city. Also, perhaps set it up for more people to walk there. Isn't that the advantage of living in the middle of the city?

You yuppies are the cancer killing this neighborhood. As a local TWENTY year old I understand change is important. But what you want to do isn't change. It's destroy. You'd like to run all the locals out of this area so you can infest it with your overindulged dogs and 3 cars per home.