All Maps from Google Earth

During the O' Malley years (as Mayor) the School System was under intense pressure to raise the High School Graduation rate, Raise Test Scores, Lower the dropout rate, and shed excess Classroom space. Any they had to do it without adding to the debt the School System accrued in the ballpark of $57-$60 Million. What was their solution?

A phase-out of the City's most troubled High Schools and reopening them as Magnet Schools or Smaller Learning Communities as they've been known to be called. Their goal was to reduce class sizes and focus on career goals students had. Their attendance area is Citywide, allowing kids from troubled neighborhoods to go to better Schools without paying for Private Schools.

Now High Schools as we know them as well as Elementary and Middle Schools have "closed." Their Buildings however, have reopened at a very low Capacity Rate. Schools will be half full and instead of reducing the number of open seats, it's keeping them the same or in some cases increasing the number of seats. Elmer A. Henderson Elementary in Middle East, Madison Square Elementary in Oliver, and Malcolm X Elementary have reopened as Charter Schools in recent years. Now what's happened to Middle Schools that have supposedly closed? Harlem Park Middle Still operates as the Augusta Fells Academy for Visual Arts, Benjamin Franklin Middle has become Masonville Cove Academy (a Middle/High School), Lombard and Robert Poole Middles both have other Schools in operation in their Buildings. The propsed closure of Paul Laurence Dunbar Middle already has a use if the School does indeed "close." One can only wonder what "New Schools" will open in the Buildings of Hamilton Middle, Southeast Middle, Canton Middle, West Baltimore Midde, and Diggs Johnson Middle. Two Middle Schools have appeared to have remained closed for good. They are Pimlico and Highlandtown Middles which have been used by the Fire and Rescue Department and a Mixed Use Development respectively.

Now when these Schools were closed a big reason was low test scores and declining enrollment. Another factor was the condition of the School Building. It would only seem natural that when these buildings reopen that have undergone massive renovations. Well guess again, they haven't. The City School system is shooting itself in the foot by allowing these buildings to remain open because they have been and are continuing lose out on School Construction Funds from the State and the Feds due to an overwhelmingly large percentage of unfilled seats. So in creating these Smaller Learning Communities, the City has failed to reduce the number of unfilled seats.

What these Smaller Learning Communities have done is create safer more nurturing learning environments for Students lucky enough to attend them. Therein lies another problem. I said in the last sentence "for Students lucky enough to attend them" since these are Magnet Schools I'm sure there are Students who can't get in for various reasons. Students still at traditional High Schools are struggling to learn and are disrupted by constant fights and fires. Teachers have even been caught in the crossfire.

Ok, so we've identified the problems; too many under utilized Schools, said Schools are completely outdated, Students in traditional High Schools (also under utilized and outdated) are not providing Students with the Education needed for them to pursue College and the World of Work. Now that I've identified the problems wouldn't it be fit for me to offer solutions? Well if no answered no too bad I'm offering them anyway.

What's needed is a return to traditional High Schools Districts with Students who live in said Districts will attend School there no matter what. The curriculum offered at each Smaller Learning Community or Magnet School will be offered at every new "Neighborhood High School" everything from Maritime Industries to Visual Arts will be offered in all of these brand new State of the Art Buildings which from the closing (and continued closure) of existing buildings will be funded by the State and Feds because Baltimore will have lost enough Classroom space to warrant it. Now how about we see where these new Buildings will be located and what neighborhoods will attend them. 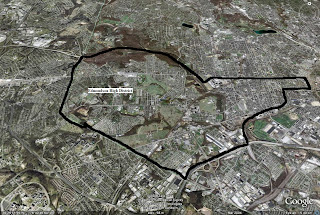 Fredrick Douglass High: Although Douglass High is the Nation's second oldest School for African Americans and enjoys a proud history as such it has been housed in many buildings since 1883. It will move from its current Gwynns Falls Parkway digs to the site of the William H. Lemmel Middle. This will be a more centralized location within the District and will allow the new Building to be smaller to fit the School's current enrollment trends. 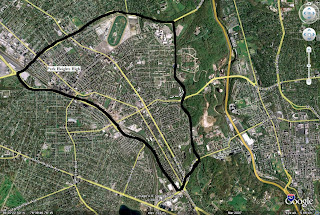 Park Heights High: This will be built on the site of the former Greenspring/Dr. Roland Patterson Middle) The Kipp Ujima Schools will be relocated elsewhere (I will dedicate an entire post for this) This location was chosen because I would close Northwestern High and open a new smaller School in the heart of the Community it serves. 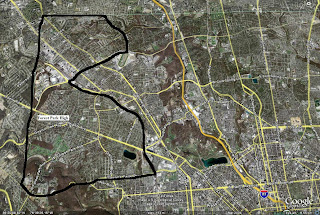 Forest Park High: Declining enrollment, lack of Student Safety, and a rapidly aging Building plagues this once proud High School. A new building located on the grounds of Garrison Middle (which I would close) and redistricting Glen and Fallstaff here to boost enrollment will assist in making Forest Park a School to envy. Redevelopment of troubled apartment complexes in the District may curve the violence at Forest Park. 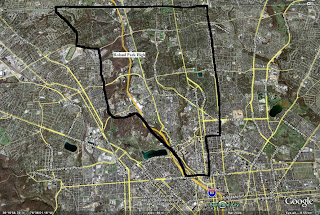 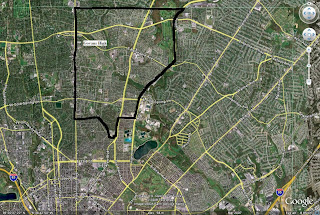 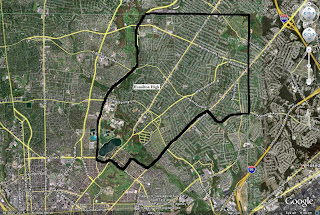 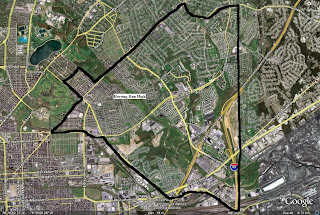 Herring Run High: This new School will be located on the grounds of the current Northeast Middle (which I would close) and will serve the Communities of Belair Edison, Frankford, Cedonia, Orangeville, South Clifton Park, Orchard Ridge, and Armistead Gardens. 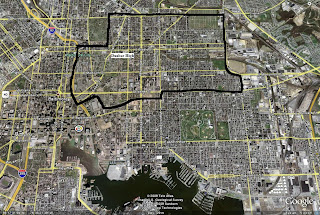 Dunbar High: Declining enrollment due to widespread vacancies and closures of high yielding Public Housing Developments and the new homes in their place not producing a lot of students has left this School one third full. However, this is one of the few Schools undergoing a renovation. A demolition would be a waste to say the least but Dunbar's population can't fill this building. What I suggest would be to sell off the newly renovated School and turn it into mixed income apartments seeing as the Hopkins neighborhoods are experiencing a rebirth. The new Dunbar High will be built on the grounds of the closed Thomas G. Hayes Elementary with a Capacity of 600 which caters to Dunbar's current enrollment. The new School's athletic fields will be on the grounds of the School itself rather than several blocks northwest. 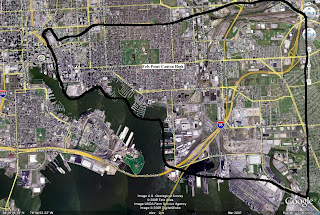 Fels Point-Canton High:This is basically Patterson High's District. That being said, there are several reasons the current Patterson High isn't a good fit. It's too far from the heart of the Community it serves, it's under crowded, and the ever expanding Bayview Medical Campus would probably love to buy the land the School sits on. The new Schools will be built on the site of the closed Canton Middle. I would have preferred the Highlandtown Middle site but that's actually being converted into something different; mixed use retail/residential. 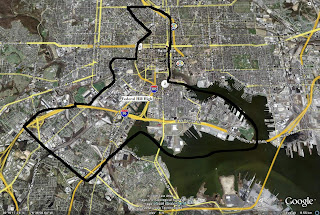 Federal Hill High: This will serve Downtown and South Baltimore. It will be located in the old Southern High Building which, before it was converted to Magnet Schools was renovated. This has proven to be the exception not the rule but why look a Gift Horse in the Mouth? Federal Hill High is ready for occupancy! This school will grow as its neighborhoods are redeveloped. 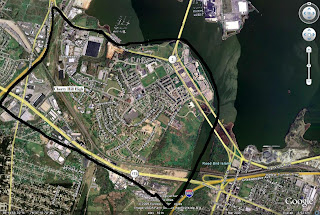 Cherry Hill High:Cherry Hill yields a lot of Public School Students so it's not surprising that it would get its own High School. The new School will be built on the grounds of the former Arnett J. Brown Middle which currently houses Southside and New Era Academies. About a year and a half ago there was a fight between the two Schools that resulted in a lock down in both Schools and several arrests and suspensions. Obviously this is unacceptable and some of these students may have to be put in classes that address their anger problems. 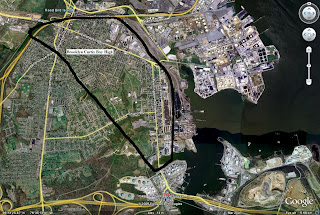 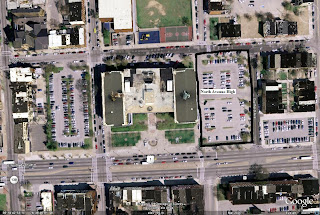 North Avenue: This school, which will be located on the Eastern Parking Lot of the Baltimore City Public School System's Headquarters. Its district will be Citywide. It will be for High School Students who are "at risk" What do I mean by "at risk?" Well, students with multiple Disciplinary Referrals for class disruptions, Suspensions, Truants, and Arrests and may suffer from Drug Addiction. Their curriculum, in addition to regular academics will provide counseling to put them on the path to College rather than the vicious cycle of the Drug Culture that so many Baltimore School Children have been caught up in.

Well I've presented a plan to tackle all the High School woes. I've gotten rid of wasteful space allowing for State and Federal Funding for School Construction, I've added Magnet Programs to traditional High Schools, and I've implemented a plan to increase the graduation rate. Now when a School closes lets keep it that way.

just curious where you got the info on the new high schools. haven't heard a thing about western high school moving out of the building and a new high school coming in.....
would love to know more about this!

There are no plans, this is my personal belief on how Baltimore City High Schools should restructure.

To start with I would like to congratulate the cradores of this blog, mainly because when I read it I enjoyed it very much. A few years ago I attended a conference called guanacaste costa rica real estate, at that conference had many interesting topics. Perhaps readers may find no relationship between the blog and this conference, but if someday can attend, would realize that there is much to do with this blog.

Hello .. firstly I would like to send greetings to all readers. After this, I recognize the content so interesting about this article. For me personally I liked all the information. I would like to know of cases like this more often. In my personal experience I might mention a book called Generic Viagra in this book that I mentioned have very interesting topics, and also you have much to do with the main theme of this article.