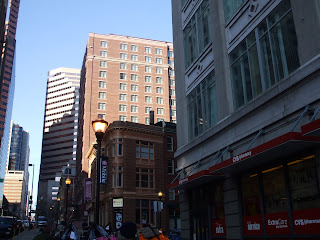 Well, Baltimore has a new Mayor. Stephanie Rawlings Blake has taken the Office after Shelia Dixon resigned and like any new Mayor, she has an agenda. Now, so far all that needs to be done in Baltimore is removing four feet of snow and I'm sure Madame Mayor has a more ambitious agenda than that. 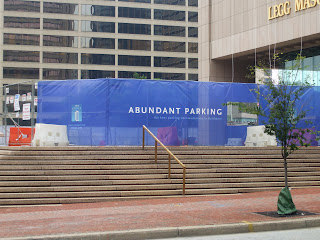 The Sun Paper asked Ms. Rawlings Blake what she had in mind for Charm City and here what she said. She wants more Economic Development Downtown which had been drained away to Inner Harbor East and Canton Crossing, she wants the Westside of Downtown to be vibrant once again, and more Federal Agencies to locate in Baltimore. She also wants all of Downtown to connect i.e. no dead zones. Well Madame Mayor, at the risk of sounding arrogant; why don't I draw you some blueprints on how to rediscover Downtown? 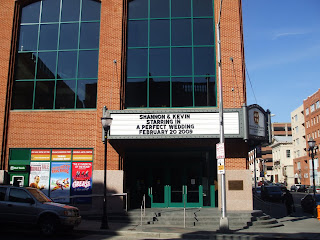 First we'll start with the Westside of Downtown. There are many treasures here such as Lexington Market, The Hippodrome, The Lyric Opera House, 1st Mariner Arena, and the old Grand Dame Department Stores. One big problem, perhaps the biggest is that so much of the Westside is in shambles. Just walk up Howard St, Lexington St, or Park Avenue and you will see that no Tourist and even some Residents won't feel safe going through here just to get to these attractions. 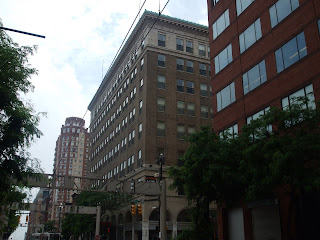 Even those who live in the stately old Buildings turned into Apartments and Condos park underground and enter their buildings through the garage. 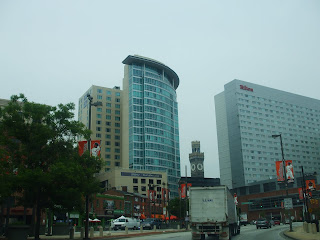 There were many development plans for the Westside of Downtown such as the Bank of America "Superblock" and the Residences at Lexington Market which, due to the economy have been shelved or scrapped. The best thing to do would be to take these plans off the self and find a Developer with deep pockets willing to take the risk and get these things built. Now, in its heyday the Westside was Baltimore's Retail Shopping Mecca. 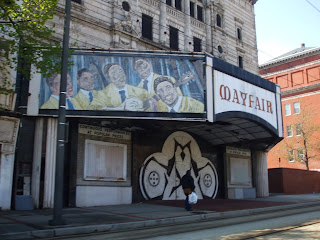 This is how the Westside should come back. The Residential Plans shouldn't be scrapped but for every parcel of the Westside that has made a comeback there are about 5 other parcels that haven't. What's needed are at least two solid Anchors other than the Superblock to draw people back. The first should be a Multiplex Cinema on the grounds of the shuttered Mayfair. The redeveloped site will spare the Mayfair Marquis. 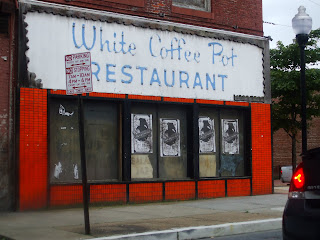 Other Retail will be a mixture of National Chains and Mom & Pop Businesses including a reopening of the White Coffee Pot, a Baltimore landmark that has sat vacant for far too long. This will be a Mom & Pop operation that already has the brand name recognition of a chain. 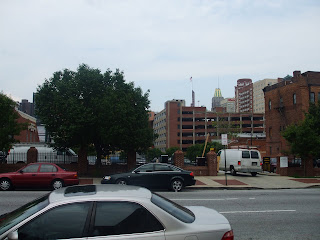 The second anchor should come in the form of a Transit Hub. This will include making the Red Line run through the Westside instead of beyond it. The Hub will be located here on Paca St. next to Lexington Market where there are both Light Rail and Subway stops already. Here's my Red Line Plan for Downtown, it's not Option 4C. Hopefully with a new Mayor, Baltimore can fix its flawed Red Line. 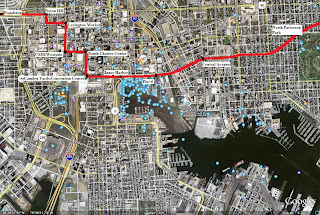 Notice that my Red Line Plan stops at all the important places throughout the Westside of Downtown. Option 4C does not and will not help in your wish to rediscover the Westside Madame Mayor. 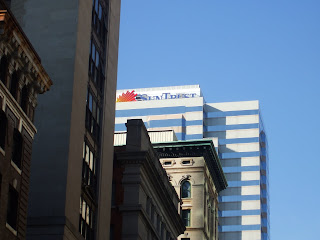 Next on your Agenda, we come to Economic Development. Companies like Legg Mason and Sylvan Learning Center have moved southeast to Inner Harbor East leaving Charles Center, the City's Central Business District open for new businesses. The problem is Charles Center has a fortress like barrier of buildings that closes it off from the rest of Downtown. 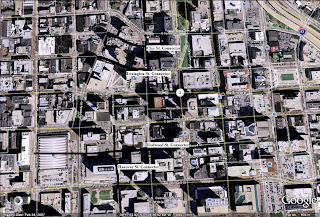 Luckily, I have come up with a plan to re open streets that have been cut off when Charles Center was built. It will include some redevelopment but I think it will ultimately have a positive effect. The redevelopment in question would Hopkins Plaza, 1st Mariner Arena, and The Mechanic Opera House. It will connect Lexington St, Redwood, St, and Clay St, to their stubs on to the east and west of Charles Center. Like the Westside, Charles Center needs two anchors as well, neither of which will be Office Buildings. 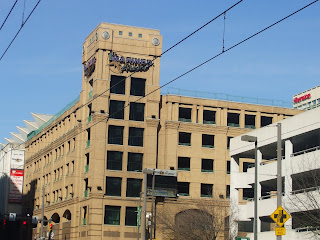 The first anchor will be a redeveloped 1st Mariner Arena. The current structure is dated and has just one entrance/exit and nothing in the way of ground floor Retail. In other words, it's a dead zone. Luckily it's slated for redevelopment and it will address these concerns as well as residences above it. One more thing I'd like to see happen is a Red Line Stop for it. My South Charles Center Stop on my Red Line Plan includes a small pedestrian tunnel that would lead to the new 1st Mariner Arena. Redwood St. would travel underneath the redeveloped 1st Mariner Arena. 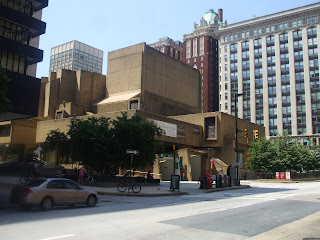 The second Charles Center Anchor will be a redeveloped Mechanic Opera House. It currently sits closed down awaiting a market turnaround for redevelopment. And no, the entire building is not boarded up, that's what it actually looks like, no wonder it closed down. Its redeveloped replacement will be similar to the redeveloped 1st Mariner Arena in that it will be mixed use with Retail and Residences above. The Developers are considering a Hotel instead of Residences above but the two new Hyatts a block or two away makes the need for a Hotel less urgent. 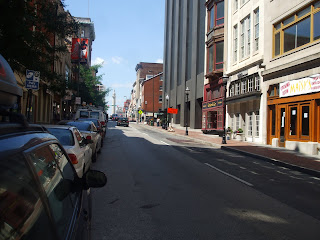 To lure in the locals to Charles Center, the Charles St. Trolley will be an invaluable asset to shuttle Residents between Mount Vernon, Charles Village, Station North, and the Inner Harbor. Hopefully with a new ground level trolley Charles Center will become a destination for toursists and a viable night spot in and of itself. 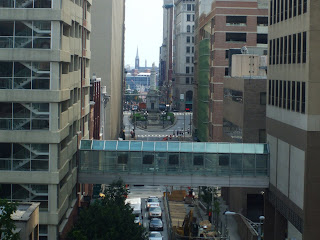 To lure in Big Business to Charles Center will require a further reaching form of transit. That will spur the birth of the Yellow Line. Now this can be without much cost but this little stretch of it will be a great resource for Downtown. This little stretch will connect to all Transit Lines existing and proposed. There are also many underground parking gragaes that the Yellow Line can "borrow" from to fashion a tunnel. It will start at Camden Yards breaking from the Blue Line going down Conway Street to Light St. where at Pratt St. it will meet the Red Line. Between the Convention Center and Harbor Place a tunnel is easy to carve out. It will meet the Green Line at Charles Center where the Station is already built for two lines. It will then go up Calvert St. to have a City Hall/Court House/Mercy Hospital Stop. It will end, for now at Penn Station where there are transfer to the Purple Line, MARC Camden Line, and Amtrak. 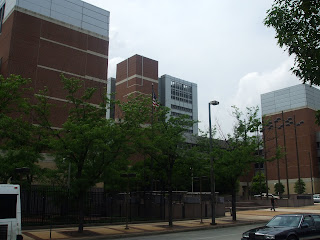 Another item on Mayor Rawlings Blake's Agenda is to lure Federal Agencies to Baltimore. She is citing the soon to be vacant Social Security Complex (they're moving to Reisterstown Station) as the perfect place. I happen to disagree. The Social Security Complex is invasive, sprawling, and goes against traditional urban planning. I think the Building and its Parking Garages (yes it has more than one) and build a series of denser buildings that would act as a Catalyst for further Westside redevelopment, State Center Redevelopment, and Road to Nowhere Redevelopment.
I can't tell you Madame Mayor, how to lure the Feds to Baltimore but I can tell where past Administrations didn't do enough to lure Federal Agencies here in the past decade. 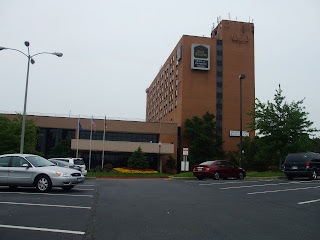 First is BRAC, Maryland has lured several closed Military Bases to Fort Meade in Anne Arundel County and Aberdeen Proving Ground in Harford County. Now, the City has been trying to lure residents relocated due to BRAC but in doing so would turn Baltimore into a suburb. This has been named "BRACaction" What should have been done was to relocate the closed Bases into Southeast Baltimore City/County. There's more than enough land and infrastructure if you put together unused land in Sparrows Point, Fort Holabird, Dundalk Marine Terminal, and the old Bethlehem Steel Plant to turn it into Fort right here in the City. BRAC is estimated to bring a total of about 200,000 residents to Maryland and if just half of them moved to the City, its Population would be 740,000 which is 4,000 more than Baltimore's 1990 Population. In the suburbs, Baltimore won't come near to that number. 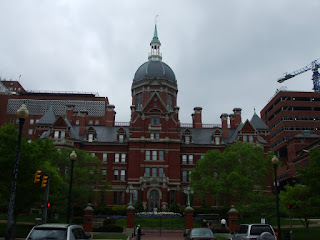 Next would have been Homeland Security. Again Baltimore has the infrastructure to support it and it went to Anne Arundel County! Looks like Janet Owens did more than give out Gift Cards to lure this Federal Agencies to her County Why wasn't she investigated? Lets not forget that the NSA is also located there. If Homeland Security located to Baltimore, the perfect place would be on the Surafce Lots known as Penn Fallsway tying Johns Hopkins Hospital to Downtown and possibly hurrying along the JFX Demolition and the construction of the Yellow Line and the Red Line and the Green Line Expansion Northeast. 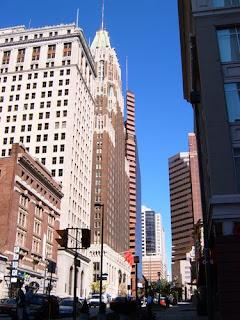 Well Madame Mayor, I have set forth some ideas to help you and the City of Baltimore rediscover Downtown. I hope that's just a fraction of your agenda, after all, Baltimore is a City of Neighborhoods!
Posted by Spence Lean at 1:42 AM