New Rail Lines: Start Downtown and then the Suburbs Phases I and II 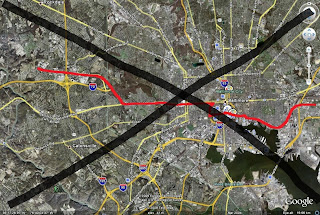 As Baltimore plans to commission the unpopular Red Line Option 4c I'm still here advocating for a better process for building such lines and more adequate means of funding. Certain parts of the Red Line have major flaws (surface level on Edmondson Avenue and Boston St.) to name a few. This is both because inadequate funds have made planners marginalize the project and they're trying to build the whole line at once. Communities no where near the Red Line still lack any sort of rail transit and need it. Lets build (in phases) the best Rail Transit System that will be the benchmark for Cities in the future just like the Inner Harbor. 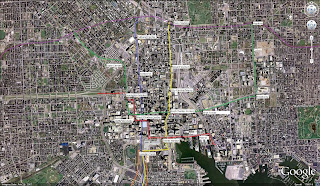 Phase I:The Downtown Network
As the title suggests we start Downtown and build outward. As you can see I've started not just the Red Line but the Yellow Line as well. The Yellow Line will travel with the Central Light Rail Line between Linthicum and Camden Yards and will end at BWI Marshall (for now) and at Camden Yards will branch out traveling along Light St. to meet the Green Line at Charles Center and then reach the Eastern Edge of Downtown via Calvert St. ending (for now) at Penn Station. The Light Rail "branch" to Penn Station will be discontinued as the Yellow Line will now serve Penn Station. One thing that will be done as part of Phase I will be localizing the MARC Lines which will birth the Orange and Purple Lines. That will instantly add access to dozens of neighborhoods across the City and County. Now the Red Line will start roughly at the Social Security Building (for now) and will travel southeast with stops at Lexington Market, UMB, Charles Center, Camden Yards, the Inner Harbor, and will end (for now) at Harbor East. The Green Line will add a stop south of Hopkins to complement the new Development there and one at the Hopkins Biotech Park that will meet the Purple Line. The current Hopkins Stop will cease operations. Although not pictured on the above map, the Charles Street Trolley will be built in its entirety.
Phase II: Hugging Downtown 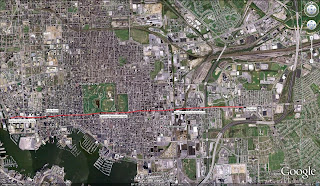 Pretty soon after the Downtown Network is complete and its jammed streets start moving again;
residents from far and wide will want Rail Transit under their doorstep. Just like I wanted because the neighorhoods that "hug" Downtown will compromise Phase II. Here we have the Red Line being extended into Southeast Baltimore where reinvestment and redevelopment are taking this area by storm. It will travel along Eastern Avenue (tunneled) where it will reach Fells Point, Canton, Brewers Hill, Highlandtown/Greektown, and Bayview. New communities like Harbor Point, Henderson's Wharf, Canton Crossing, Athena, Square, and the Highlandtown Arts & Entertainment District will all be even bigger draws to new residents and give existing residents incentive to stay and keep the Benz parked in the garage. 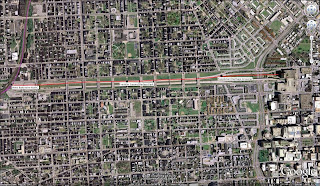 Also in Phase II will be the westward extension of the Red Line to the West Baltimore MARC Station. This area is poised for major redevelopment which includes the infamous "Road to Nowhere" now I will refer you to my friend Peter Tocco's "Baltimorphisis" site in my links section to show you the best way to reinvent the Road to Nowhere. The best part of it is that the Baltimorphsis plan can be implemented before, during, or after the construction of the Red Line. Also, the forth coming West Baltimore MARC Station redevelopment can commence. The Franklin Square and Harlem Park neighborhoods can be redeveloped as high density TOD zones. 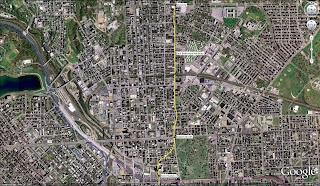 Now the Yellow Line in Phase II will extend north from Penn Station. It will make an easterly turn in the Greenmount West Community to run along Greenmount Avenue rather than Calvert St. (its Downtown Route) It will have a Station North stop which will help bring investment to lots of abandoned Industrial Lofts in the eastern edge of the Community. Above North Avenue Greenmount Avenue/The Yellow divides the Barclay and East Baltimore Midway Communities. Both of these neighborhoods suffer from every urban ill of decay from abandonment to zoning violations. In my opinion the entire East Baltimore Midway needs to be redeveloped as does all of Barclay east of Calvert St. The Yellow Line can help push this along. Further north lies the peaceful Waverly Community once home to Memorial Stadium. There has been a lot of redevelopment here on 33rd St. where the Yellow Line will end (for now) including a new Giant Supermarket, Senior Housing, and a YMCA. The Yellow Line completely transform Greenmount Avenue. 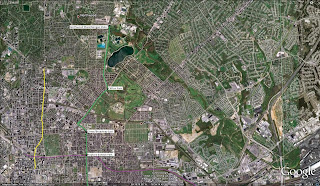 Last but not least in Phase II will be the Green Line Expansion from Hopkins to Morgan State University. The MTA has always put this on the back refusing to kill it but it seems to put other projects ahead of it time and time again. I can only assume is because the Green Line is Heavy Rail. The current Green Line runs from Owings Mills to Hopkins. The expansion will cover the Oliver and Broadway East Neighborhoods, Clifton Park, the Coldstream Homestead Montebello Community and Northwood Plaza/Morgan State. Pretty much all Communities here would benefit greatly from redevelopment which the Green Line will surely bring. Morgan State serves as a solid Anchor for the area in question.

Labels: Phases I and II

I want to take a brief moment to comment on the "unpopular" red line project. I don't think it is entirely fair or accuate to say that the project is unpopular; rather, it is unpopular amongst the very vocal minority, including some Edmonsdon Village and Canton residents, and transit supporters that favor heavy rail. I personally feel no sympathy for the Canton folks, but the other 2 groups have valid points. However, lets face it, Baltimore is NEVER going to get funding for a new heavy-rail system. We will be lucky if the Fed agrees to fund the green line extension. So though this plan is far from ideal, it is the best that we are going to get from the Feds and is better than nothing.

With that said, I am very pleased with the concept you describe in this post, about building in phases. I honestly dont understand why that isnt done, since pretty much any other major development project is done that way. This could lift our dependancy in federal dollars by spreading out the state's financial burden, and could also allow for an assessment of the priority of future phases, based on the success of the first phases.

Also, you mention localizing the MARC routes. Do you know any reason why this hasnt been done yet? This was included in the 2002 recommendations - 2 governors ago - and should require minimal cost since the lines already exist - there would just need to be added stations. I see these lines as similar to the METRA lines in the Chicago suberbs that serve what have become some of the most desirable suburban and urban communities, due to their proximity to the line. Just by buiding a few train stops and running trains on weekends, they could revitalize neighborhoods and drastically increase our connectivity to DC.