Reopening The Great Northeast Part III: The Roads are Just a Red Herring 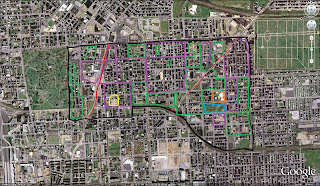 Image From Google Earth
Well I've got a confession to make; this "Reopening the Great Northeast" series wasn't supposed to be a series, just a simple post advocating for the reopening of Gay St. between Old Town Mall and Broadway and making Esnor St. and Harford Ave. into a two way street that carry the Harford Road name. That was it. But then I examined the neighborhoods of East Baltimore and their conditions and this more than just a mere roads adjustment post. This warranted in depth research on how to turn around the East Baltimore neighborhoods that surround these two roads. I developed three distinct Master Plans for three sections of East Baltimore and how to move forward. That being said, I give the final part of my Reopening the Great Northeast series. 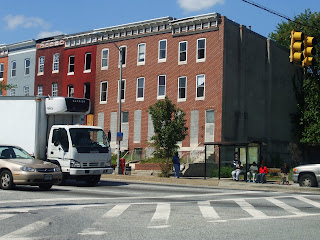 This post covers Johnston Square, Oliver, and Broadway East. The line between Johnston Square and Oliver is rather blurred so I will discuss them as one neighborhood. As its name suggests Broadway is the western border of Broadway. As you will find out Broadway is a very definitive border. The homes in Johnston Square and Oliver are typically larger and better cared for even if vacant. There have been efforts since the 1970s to revive these two neighborhoods with new and newish housing sprinkled throughout. This is what I would like to call "Historic East Baltimore" seeing that the homes are larger and are some of the most attractive and unique when they were first built. 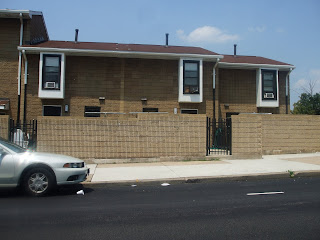 Here's an example of some of the earliest "new" town homes in Baltimore. They haven't quite withstood the test of time but they do anchor the Community very well. Two other anchors worth mentioning here are the East Baltimore Medical Center and the Stop Shop & Save Supermarket. These are both located along the one way Harford Avenue that is wide enough to support two way traffic. 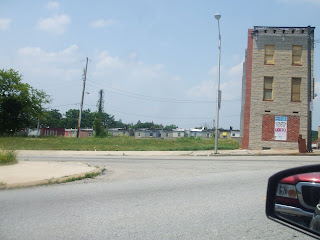 New development in these two neighborhoods should be minimal but from the picture above it's obvious that exceptions will be made. It's important to note that were Public Squares in these neighborhoods. As the name suggests Johnston Square is named after its Public Square. Oliver was home to Madison Square. In both cases, the Public Squares were marginalized to act as outdoor fields for their namesake Elementary Schools. As part of my School Closure plan, Johnston Square Elementary will be shut down and turned into a swimming center with an Outdoor Public Pool between Memorial Day and labor day and an Indoor Pool for the rest of the year. Admission? Why it's free of course! The Public Square itself will be redecorated with outdoor benches and perhaps a gazebo. It will have paths leading to the central area with adequate lighting. Madison Square Elementary has shut down but its building has been reborn as Bluford Drew Jemison MST Academy. This School will be relocated elsewhere as the Madison Square Building will be torn down in favor of a brand new State of the Art Community Center. 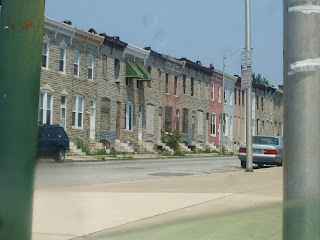 Broadway East tells a sadder tale. This is one of its healthiest blocks. Decades of urban decay and population flight have left this Community tattered and torn. Just blocks to the south is the Hopkins Biotech redevelopment. What separates the new Middle East from Broadway East is overhead railroad tracks. The trains that utilize the tracks are doing the same thing as the meager cars that drive through the streets; get out and pretend their surroundings aren't so psychologically damaging. This is a classic example of the "wrong side of the tracks" if I ever saw it. One promising development in Broadway East is Colloington Commons, a new TOD style Apartment Building that may suggest a higher density future for Broadway East. 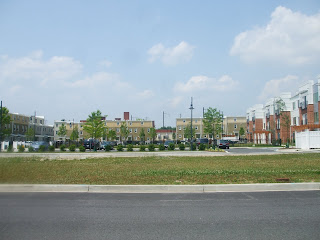 As blocks like this in Middle East continue to be filled in with new housing, I can't help but wonder if that "wrong side of the tracks" mentality can't be blurred. Ten years ago nobody would have dared to dream that a typical block of Middle East could look like this in 2010. Well now it's 2010 and I'm daring to dream that a typical block of Broadway East will look like this in 2020. Obviously there's no Fat Cat Developer like Hopkins in Broadway East that can produce a product like this. But I don't give up that easily, I look elsewhere. This time I'm turning to the very tracks that separate gentrification from blight. The 2002 Baltimore Regional Rail Plan discusses localizing MARC lines by adding more stops on its tracks. Well, I've got some good news; these tracks run MARC trains among others. This would be the "Purple Line" and can be implemented easily. 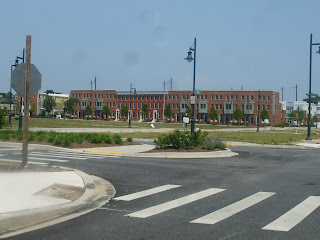 Adding the localized Purple Line would allow Broadway East to be a TOD neighborhood. It's obvious that almost all of the neighborhood will have to be redeveloped as its homes are too far-gone to be rehabbed. So, Broadway East, meet your new face and your goal set by yours truly for 2020. Collington Square Elementary will be the new Community School. It will be rebuilt and will house the populations from several other Elementary Schools that would in turn shut down. 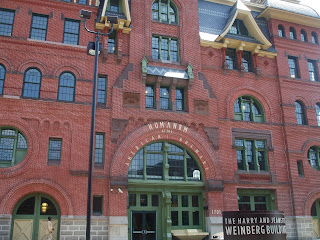 Now we come to Gay St. What say we make it more than just the address of the former American Brewery Building? First lets start with the obvious; the disturbingly odd traffic pattern found here. Gay St. is three lanes well sometimes. Other times it's two. During rush hour northbound traffic uses two lanes and other times one of the northbound lanes is used for on street parking, like there's an occupied structure on Gay St. that warrants on street parking.
My solution? Do nothing with the lone southbound lane and make the far northbound lane functional for through traffic around the clock. That just leaves the center lane; that will be home to a new landscaped median complete with bushes, flowers, and additional street lights. When needed it will give way to make use as a left turn lane. But what about on street parking? Well since I'm proposing all housing on Gay St. be redeveloped, the new housing will driveways and garages. It's almost too easy! 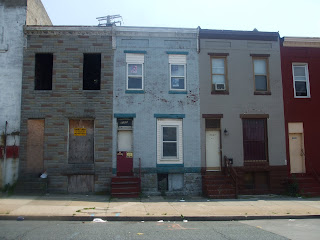 Well that just concludes my series on Reopening the Great Northeast/my referendum on East Baltimore. The only thing left to do is hold a ceremonial ribbon cutting for the new Harford Road and Gay St. attended by Myself, Mayor Rawlings-Blake, Governor O'Malley, Senators Cardin and Mikulski, and the City Council and State Senators who represent these neighborhoods.
Posted by Spence Lean at 2:15 AM