Baltimore County's Past Present and Future? 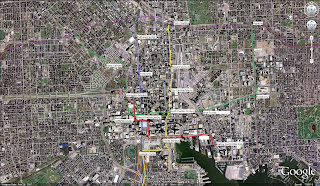 Sounds crazy right? Wrong! The main focus of this blog always has been and always will be Baltimore City. However, that being said there are a lot of things that need to addressed in the County, in the area of mass transitt to be more specific. One of the most consist things I blog about is the creation of a truly Regional Transit Network for the Baltimore Area that doesn't come to a screeching halt and the City's borders. In order to improve transit in the City it must also be improved in the County because of the direct correlation between commuters entering and exiting both the City and the County. I've always said in my transit posts that transit lines will leave the City and venture into the County with the transfer "core" pictured above being Downtown and points nearby. Also with every Neighborhood post I've done (all have been in the City thus far) I've discussed how transit will or won't impact and if a line exists how to improve on it. I haven't done that with the County, so what does that mean? It means that it may seem that I'm switching focus to the County for a while because I will be writing about Communities there rather than the City. My focus always has been and always will be the City and I would be doing the City a great disservice by not making the County as transit friendly as possible. When it comes to transit in the County and City I think it's very clear that one hand will have to wash the other. Stay tuned for County Posts and City Posts as both are relevant to Baltimore City's Past Present and Future.
Posted by Spence Lean at 12:12 PM

Looking forward to reading your series on County issues. One think I think of if there will ever be any improved transit connections to White Marsh (that one lonely bus stop near Sears and the other one near IKEA is not the answer).