Poppleton: At a Crititcal Juncture 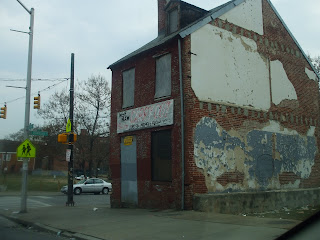 I recently was contacted by Suzanne Gunther, a reader of this blog who made me aware of some new affordable housing in Poppleton. 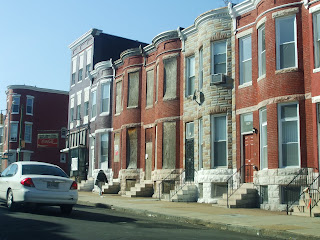 She also told me about the Michael Group, a firm that is very committed to providing affordable housing in Baltimore via Section 8. Their mission is to provide a second chance to young males who would otherwise be homeless, many times through no fault of their own. Their mission of "human redevelopment" a phrase I coined a while back that, in a nutshell means that physical redevelopment won't be successful unless programs are set in place to mend social problems that new housing alone can't fix. Hats off to the Michael Group. 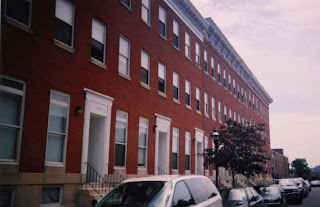 Now back to Poppleton, I told Suzanne that I would be happy to write a post about Poppleton II, the 111 unit affordable housing development proposed to be built on what is currently dilapidated vacant row homes. Now when I'm asked to write a post by a reader or any other interested party, I do so the way I see fit. I think Poppleton II will be a great addition to the existing Poppleton Community but I do have concerns about what direction this could take the Neighborhood in and I would like to take this opportunity to voice them. Poppleton right now is at a critical juncture and any new development must be examined carefully so mistakes from the past aren't repeated. 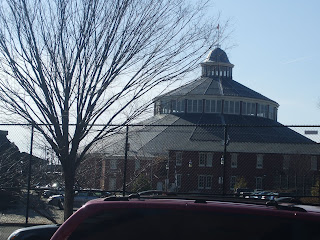 To fully understand Poppleton as it is now I must start from the beginning. Poppleton was a product of the B&O Railroad and the slaughter houses located south of it in Pigtown. Poppleton housed the many railroad workers that were required for its successful operation and expansion. Poppleon was a successful working class Neighborhood where employment opportunities and hard work almost guaranteed a secure future. 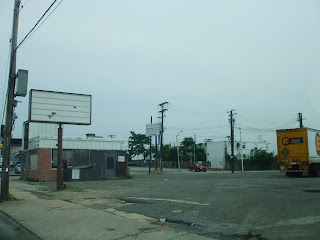 The Job Market in Poppleton (as well as everywhere on the planet) came to a screeching halt as the Great Depression devastated America. The proud working class Community of Poppleton not only was loosing its employers but its population as well. As the Great Depression continued along seemingly endlessly the City erected a Public Housing Development known as Poe Homes. A glimmer of hope came through at the end of the 1930s; America's Entrance into World War II.
World War II not only new brought jobs to Poppleton and Baltimore as a whole but tens of thousands of new residents from rural areas seeking employment. Although Bethlehem Steel had a huge contract with the US Government during the War they couldn't magically create additional housing for all the migrant workers. Overcrowding became a way of life in Baltimore especially in the segregated Black Neighborhoods which weren't allowed to expand despite a surge in population. Poppleton, still a White Neighborhood at the time was assured that the color line wouldn't change and that the overcrowding would stop once the War ended and the need for Migrant Workers would dry up. 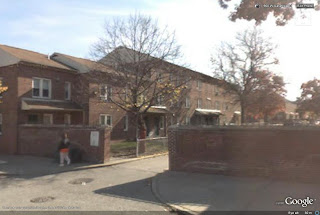 Well they were half right, at War's end the need for Migrant Workers did dry up however, they chose to stay in Baltimore anyway. Obviously the overcrowding brought on by Migrant Workers didn't diminish in fact it was exacerbated by the fact they were unemployed and relying on the City for financial help. Not surprisingly allowed for the Black Neighborhoods to expand west and south into Poppleton. 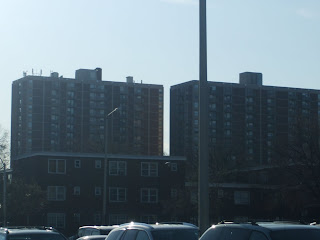 This caused massive White Flight from Poppleton into the newly booming Suburbs and Poppleton became a Black Neighborhood in a few very short years. East of Poe Homes, Slums began forming and as part of a sum removal effort a new public housing high rise community known as Lexington Terrace was built as were Murphy Homes and McCulloh Homes (above) in the adjacent Upton Neighborhood. It seems as though Inner Cities were beginning to become nothing more than a place to house Blacks. As blockbusting occurred in White Middle Class City Neighborhoods such as Edmondson Village, Poppleton's Middle Class Black Residents took advantage and by 1965, Poppleton was home only to poor Blacks. This led to a decades long downward spiral. 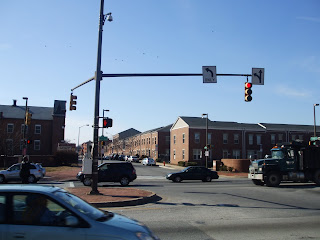 Poppleton continued on a downward spiral until the late 1990s when it was determined that the failed Lexington Terrace High Rises had to be demolished. With help of HOPE VI Federal Funds this was accomplished and a Town House Development known as Townes at the Terraces which has been successful in reducing a crime and has given that area of Poppleton a new face. Although most units of the new Terrace Development are still public housing there are some that are market rate. Newer High Rise Demolitions have gained a higher number of Market Rate Units versus Public Housing. 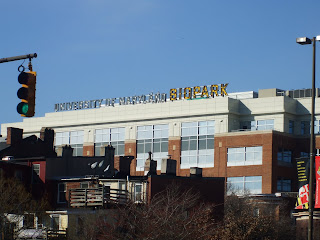 More good news graced Poppleton's front doors in the early 2000s when UMB announced that its new Biotech Park will be located in Poppleton. Although the Hopkins Biotech Park on the east side was accompanied by the redevelopment of close to 1600 homes in the Middle East Neighborhood, the stand alone Biotech Park in Poppleton should attract the attention of developers as well.

And wouldn't you know it? It has! Hampstead Co-Op and the National Housing Trust has teamed up to both Renovate Poppleton Place Apartments and build Poppleton II 111 new units of affordable housing. Now Poppleton II is very much needed but as far as low income housing goes that should be it.

Upon completion of Poppleton II, the Neighborhood as a whole should be stabilized enough to attract a broader mix of incomes. Whether or not additional new development will come in the form of solely low income housing or a mixture of incomes is a question that's hanging in the balance. If too much affordable or low income housing comes to Poppleton, we will be making the same mistakes that were made when Lexington Terrace was built. 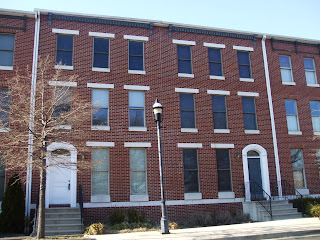 Since the Hampstead Co-Op is focused on building only affordable housing, I think it would be better to seek another developer for future projects. Future projects should focus on Home ownership which will ensure a solid population base that isn't on the move like it is with rentals. As more dilapidated properties are acquired and requests for proposals for the bundled properties, the aim should be a mixture of Market Rate Home Ownership 65%, Market Rate Rentals 15%, and Affordable Home Ownership 20%. This should further stabilize Poppleton and if Poe Homes were to be demolished, it could be replaced with upscale TOD as the Red Line will be at its Front Door. 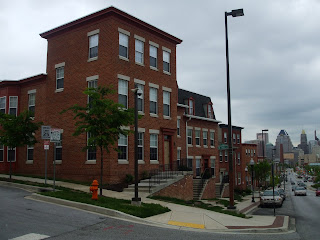 Popleton Street was a nice area when I was a kid.My father used to to to Dr.Munese up on Poppleton and Lombard back in the 1970's.I used to live right around by the B&O Railroad.I have many memories of that area.

Very good read for the history of this neighborhood. It's so close to UMB, I would think it's a good place to buy and hold if cash is sitting in a savings account not producing much in interest.

Ultimately, Baltimore will go up due to its short distance to DC.

True but I hate the idea of Baltimore losing its urban vitality and becoming a suburb of itself or worse DC. If Baltimore comes back it should be because of its own robust Job Market that will make it a self sustaining City in its own right rather than just a cheap alternative to DC.

Thanks for this comprehensive look at Poppleton, past and present! Very helpful!

I love this story. My family and I have a very strong history with Poppleton. Our neighborhood have suffered such disinvestment and now I believe the wrong investment. We 100 percent need houses for homeownership, and rentals if we are going to compete with the diversity of Union Square, Barricircle, and the improving MtClair and Pig Town neighborhoods. We are continuously being told that there is know market for homeownership. What happens when the milliniums are are ready to have families and want out of there condos but still want to live near where they work. Poppleton will not be a future desirable place to live. Congested with over crowded apartments highrises,commercial retail, University of Marland and its affiliates, and parking garages. No longer a residential area but a close resemblance to what was when the Lexington Terrace existed.Just upscaled.