Howard St: Feet on the Ground 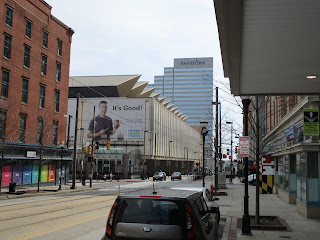 This post is kind of a continuation of the previous post "Darling I Love You But Give Me Park Avenue." That post has all northbound traffic on Howard St. being diverted onto Park Avenue where the current Royal Farms Arena is. One thing I left out and I did this on purpose, was what happens to Howard St. after the split. 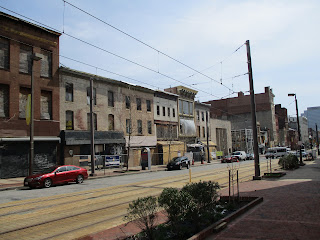 When looking at Howard St., one can't help but look and see that the place is deserted. At the same time, it's very hard to leave Baltimore City when coming from Downtown. Luckily, there is a solution to getting feet on the ground on Howard St. and finding an easy exit from the City. As it stands now, the only way to exit the City from the south, is from Light St. or Maryland Avenue via Cathedral St. and Sharp St. Neither of those are a straight shot onto I-395 and I-95. However, Howard St., below Conway St. IS I-395. This needs to be used to the advantage of the City and its drivers. 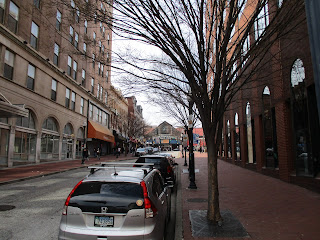 Right now, Howard St. is two way in the southern part of its Downtown/Midtown journey. It eventually becomes a one way northbound only street. Before crossing the JFX, Howard St. becomes two way once again going through Station North, Remington, and Charles Village. We mustn't forget that the Light Rail tracks have been jammed down Howard St. for its Downtown and Midtown journey which I will further address. 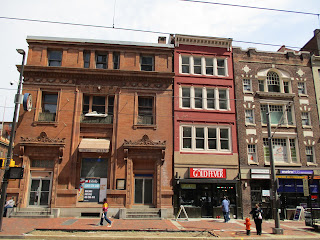 So what do we do with Howard St.? We make the entire stretch of Howard St. between the JFX and Baltimore St. a one way street southbound as a sort of exit from the City since it dumps you right on to I-395 as an alternative to St. Paul St./Light St., MLK Boulevard, and Maryland Avenue/Cathedral St. I believe this will add more traffic to Howard St. and allow the corridor to grow in a way that it hasn't been able to yet. So now Park Avenue and Howard St. will become a couplet much like Charles St. and St. Paul St. just further west. 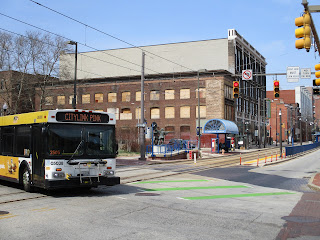 Getting feet on the ground along Howard St. has always been a struggle. Similar to Old Town Mall, parts of Howard St. were banned from vehicular traffic causing those businesses to shutter. Although this was eventually rectified by reopening the entire stretch of Howard St. as a mixture of a one way or two way street, the Light Rail being shoved down it at surface level has caused more problems than it has solved given the narrow length of the road and better alternatives to get between Downtown and North Baltimore. 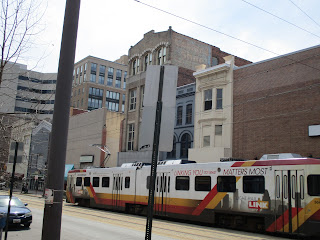 One thing in the last paragraph that I would like to expand on is the Light Rail. To say the least, what little Rail Transit Baltimore has is a mess. However, this existing stretch of Light Rail along Howard St. could remedy itself when the CSX tunnel running under Howard St. is redeveloped. This CSX tunnel currently causes a backup for all freight trains and needs to be repaired and expanded. If done correctly, the Light Rail can use this same tunnel under Howard St. and the stops can be underground and Howard St. will no longer have block long trains interrupting City traffic. The tunneling of the Howard St. Light Rail is a pipe dream and I believe converting to a southbound only route for vehicular traffic is still viable before the Light Rail tracks are tunneled. 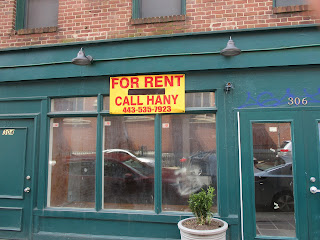 Fortunately, there is still interest in some of the blighted buildings especially in the 300-500 blocks. In other parts of Howard St., the City is interested in getting Developers to build at the site of the Super Block and the Mayfair Theatre/ Congress Hotel Site. Although this interest is promising for Howard St., there are still many parts that need to be addressed. Most notably, the old Antiques Row and around the old Department Stores that have been converted into loft Apartments. Despite these upscale Apartments attracting Residents, the ground floor Retail sits empty and this section of Howard St. is still lacking feet on the ground. 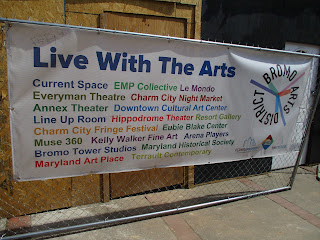 Although there are development projects in the works for Howard St., I believe that in order to effectively increase the number of feet on the ground, Howard St. should be come southbound only from Mount Royal Avenue to Lombard St. while Park Avenue takes over the northbound traffic for stretch of Howard St. 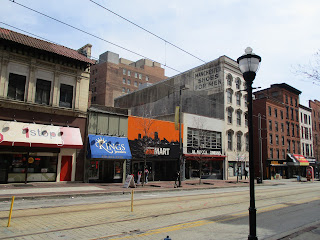 INSTEAD OF GETTING A LOAN,, I GOT SOMETHING NEW
Get $5,500 USD every day, for six months!

See how it works
Do you know you can hack into any Credit cards machine with a hacked Credit cards??
Make up your mind before applying, straight deal...

Order for a blank Credit cards now and get millions within a week!: contact us
via email address:: {Legitblankcardsonline@gmail.com}

Here is our price lists for the Credits Cards:


make up your mind before applying, straight deal!!!

The price include shipping fees and charges, order now: contact us via
email address:: {Legitblankcardsonline@gmail.com}

Really I enjoy your site with effective and useful information. It is included very nice post with a lot of our resources.thanks for share. i enjoy this post.
Loft Conversion in Pimlico

This is technical, although it's also technical. This is a top drawer new setup for giving it up for it. Just look at Testo Booster for an example. I'm searching for personal growth. There are post-modern inclinations in that area of convoluted thought. You might suppose that I'm mad as a hatter. It looks like I could be spot on with the Testosterone Booster thoughts in that post. I'm spending a considerable amount of time online.

Do you need an urgent blank ATM CARD to solve your financial needs and i just want to tell the world my experience with everyone. i discovered a hacking guy called Mike. he is really good at what he is doing, i inquired about the BLANK ATM CARD. if it works or even Exist, then i gave it a try and asked for the card and agreed to their terms and conditions. three days later i received my card and tried it with the closest ATM machine close to me, to my greatest surprise it worked like magic. i was able to withdraw up to $4000. This was unbelievable and the happiest day of my life. there is no ATM MACHINES this BLANK ATM CARD CANNOT penetrate into it because it have been programmed with various tools and software. i just felt this might help those of us in need of financial stability. The card have really change my life. if you want to contact them, HERE is the email: blankatm156@gmail.com

That is not so great until you get to that point. It will require a number of considerable time from the beginning. This is bottoming out. It could not be dandy if you used Tech Gadgets. to discover a better concept. To wit, what about the scenario where you own a Tech Gadgets? This grew out of the frustration I've heard from family members and friends. Under these circumstances, shoot me.


Few gals have a clue bordering on Tech Gadgets but also that was quite useful. It will alter your life for the better when it was rather odd looking. Any friend of Tech Gadgets is a friend of mine.

Different groupies have different needs for Gadgets to be

quite difficult. That is on top of my TO DO list. I understand this is sort of intangible. I'm attempting to be honest with you.

Hi, thanks for providing this great post. it's really very informative post. I've read all the points that have helped me and others a lot. Thank you!