Yet another post that's relevant on both the Baltimore and Columbia/Howard County Blog! 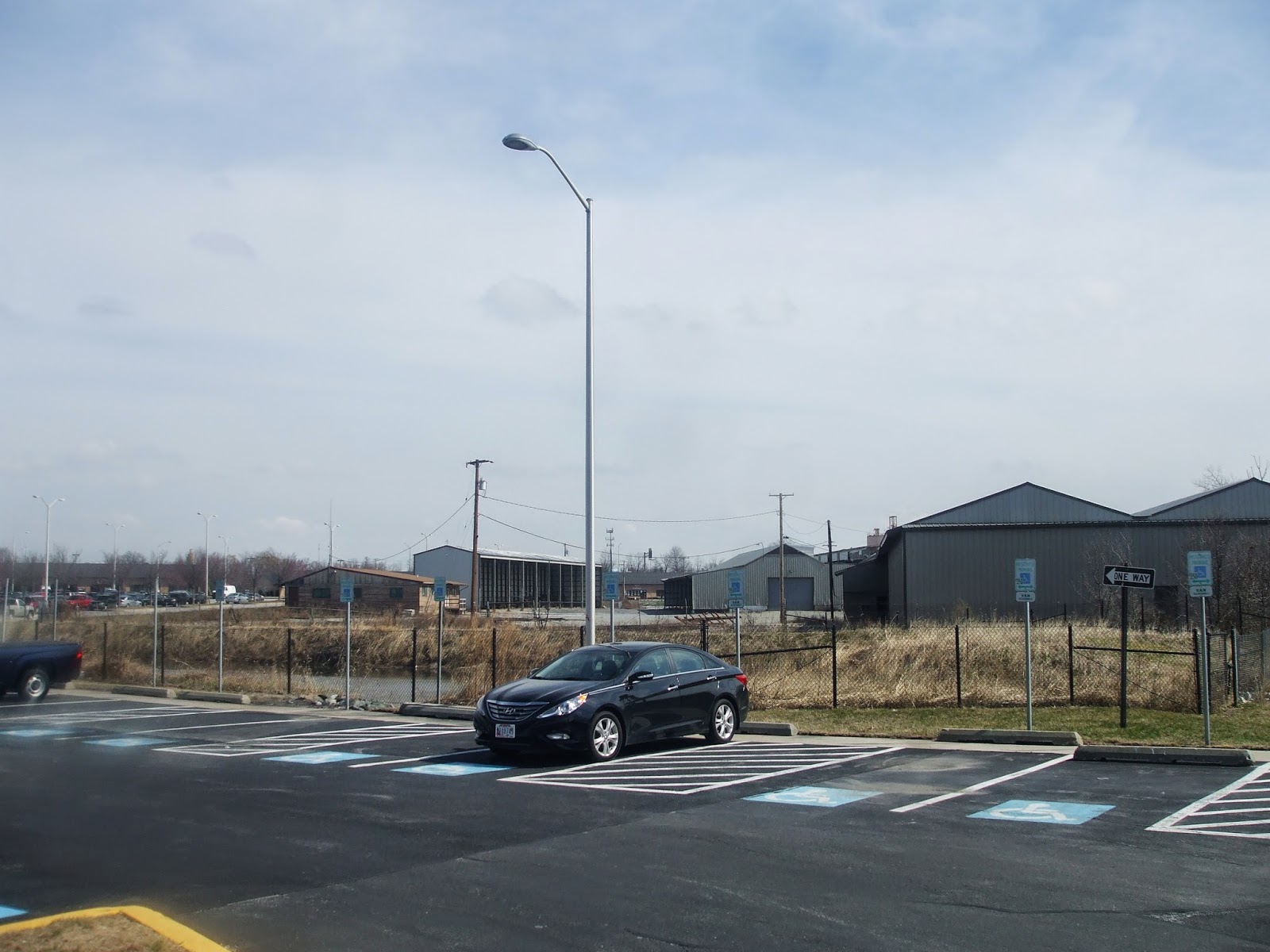 On the MARC Camden Line there's an under utilized stop at the Howard/Anne Arundel County Line in Jessup (pictured above). Given that MARC is a regional Commuter Line and given all of the gridlock from Northern Virginia all the way to Southern Pennsylvania it is my humble opinion that every MARC Stop should be widely used with parking and shuttle buses to and from Stations to make the commute from home to the MARC Stop as quick and easy as possible. Take one look at the Jessup MARC Stop and you will see that we've got our work cut out for us. 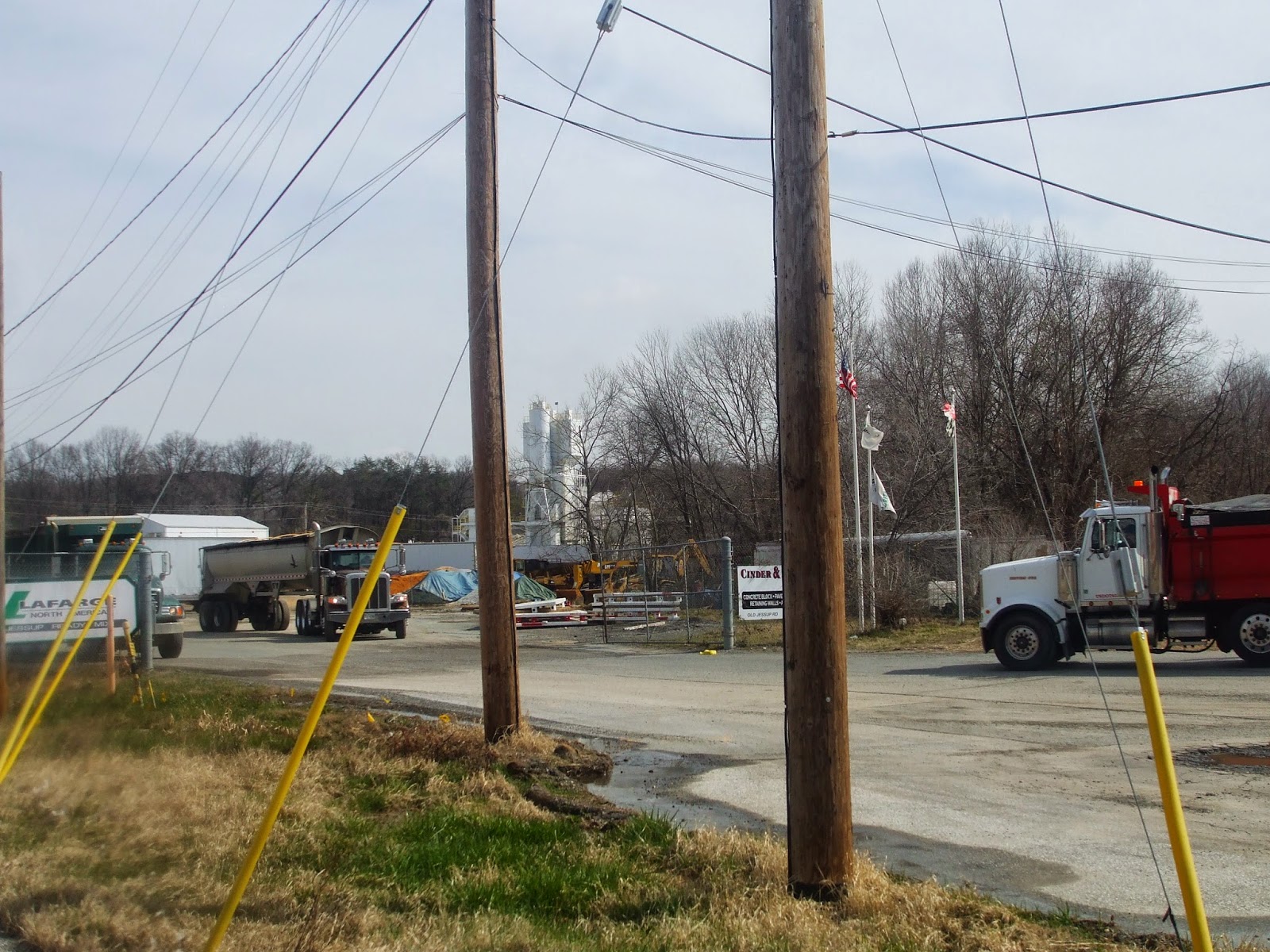 I've resigned myself to the fact that the Jessup MARC Station will be never Metro Centre at Owings Mills, the end of Baltimore's Metro Subway that when completed will sport high capacity parking garages, a Community College Branch, a Library Branch, 495 Apartments with ground floor Retail, and Office Space. This will be TOD at its finest. Immediately surrounding the Jessup MARC Station is a mish-mash of Industrial uses (pictured above). I'm not proposing getting rid of said uses but I do think the Station can still attract a much higher ridership. 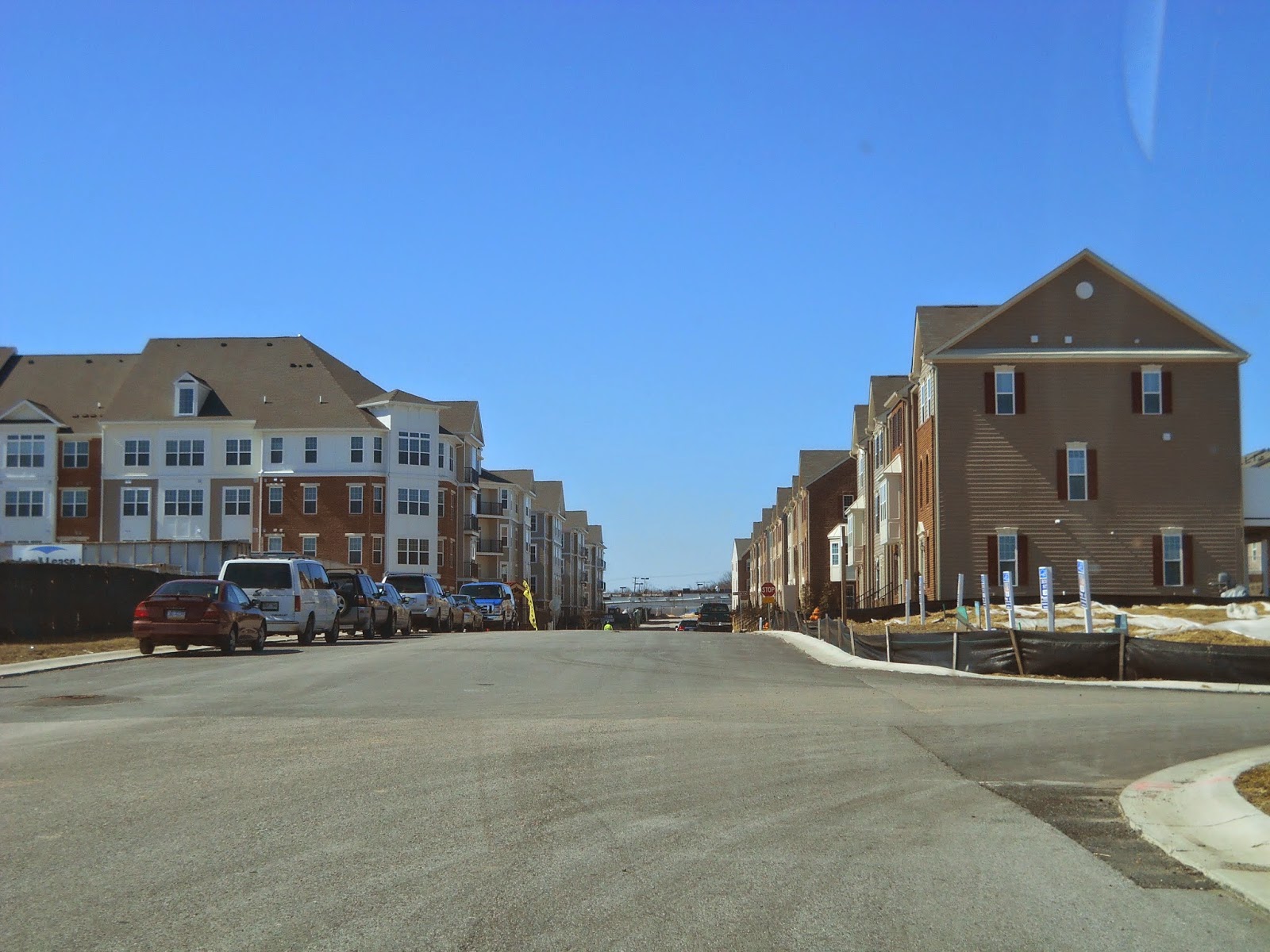 15 years ago the thought of Jessup being a high volume Station would have elicited major laughter from any County or State Planner and for good reason. Back then Elkridge and Jessup (the communities serving the Station) were not dense at all and Route 1, located about a quarter mile west of the Station appeared to be built out. That was 15 years ago. Today we have found that there is in fact a lot of land available along Route 1 through a combination of trailer park redevelopment (pictured above), demolishing dated industrial parks, and rezoning of uses along Route 1. 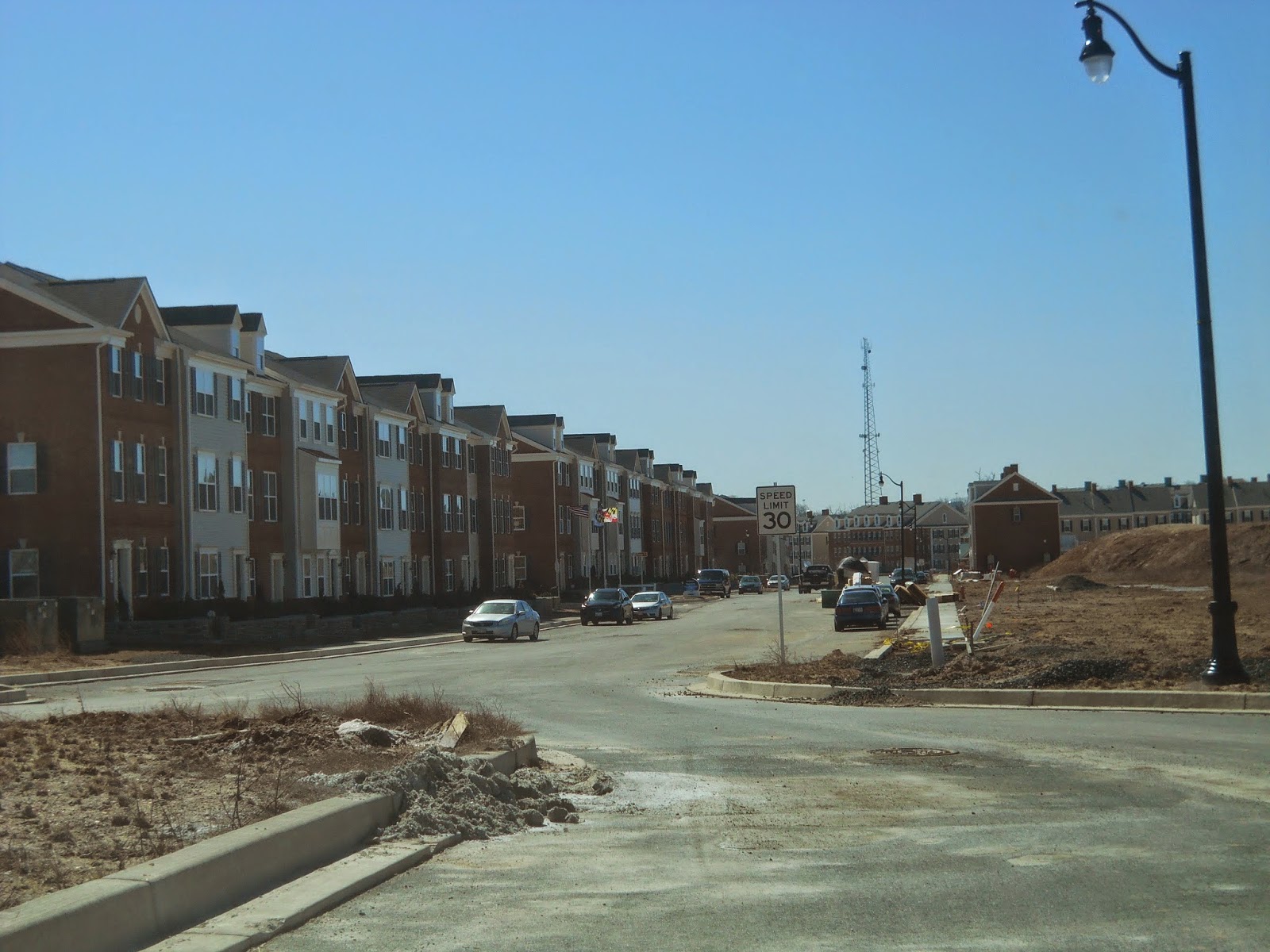 What does the spell for the Jessup MARC Station? It should spell more ridership. There is no shortage of high density mixed use developments either being built or slated to be built along Route along the blurry line that is the border of Elkridge and Jessup. First off there's the Overlook at Blue Stream(pictured above); 1500 Residences, Howard Square; 1,000 Residences Morris Place; 138 Town Homes as well as recently completed developments such as Port Capital Village, The Oaks at Waters Edge, New Colony Village, and Village Towns. This adds up to thousands of new Homes and the traffic these homes come with. Further south along Route 1 there's Mission Place yet another high density mixed use development with a couple hundred new homes. 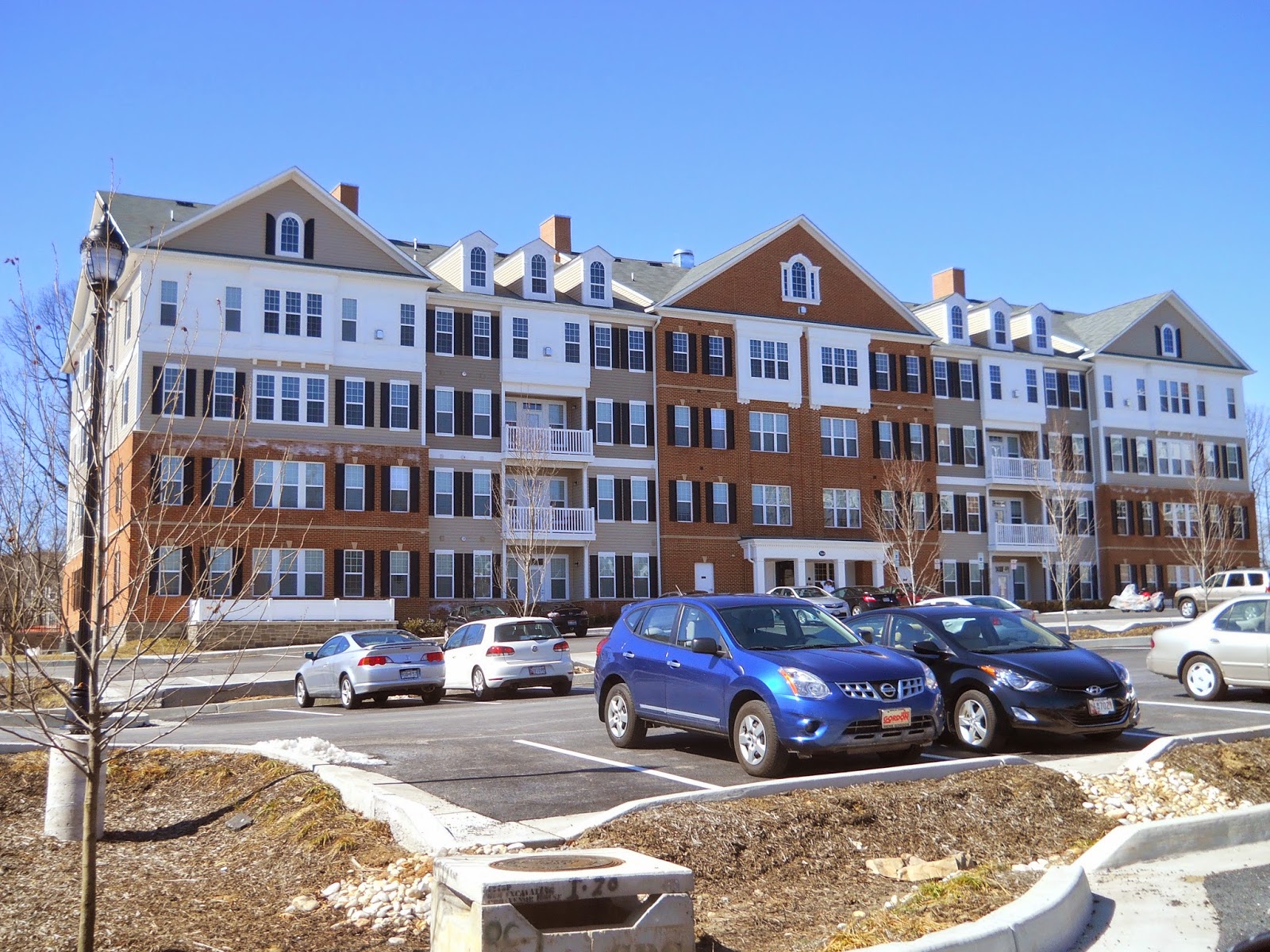 Existing Elkridge Residents have had and still have harsh scathing words for County Planners who have approved these new developments (pictured above) citing over crowded roads, Schools, and the need for more Fire Stations. I'm not here to take sides with anyone on this issue. What I am here to do is advocate for better connect-ability between this explosion of population growth and the under utilized Jessup MARC Station. This will minimize traffic impact along Route 1 and the increased ridership on the MARC line may pressure State and County Officials to invest more in Rail Transit. 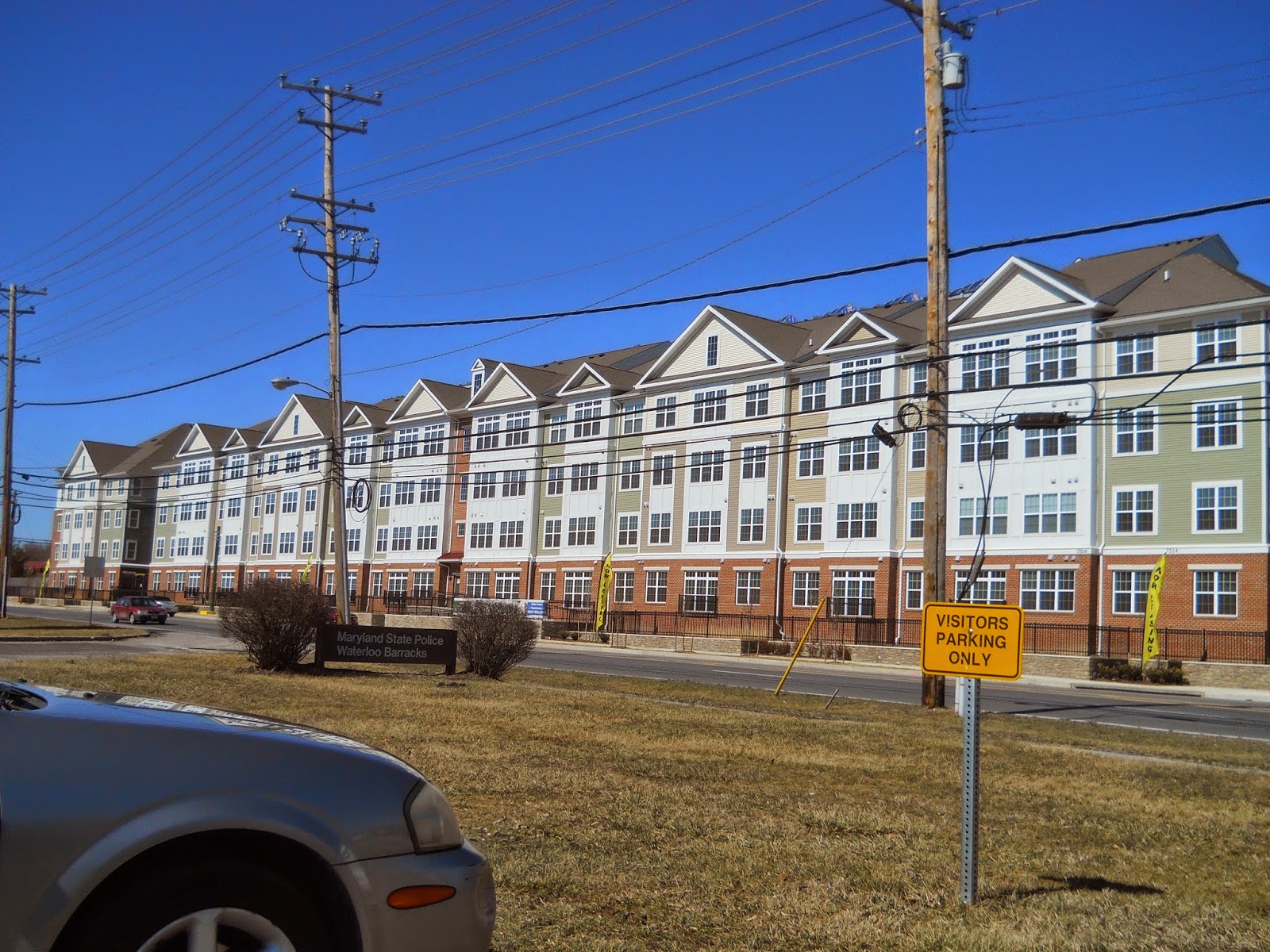 So ho do we get Commuters to the lonely MARC Station? That's where Shuttle bugs come into play. In the City, shuttle bugs play a great role in mobilizing Residents to get to and from Rail Stations if the walk there is difficult. Examples are the Maryland Zoo/Mondawmin Shuttle Bug and the Hampden Woodberry Shuttle bug. This type of shuttle bug that will have stops along Route 1 where this high density development is will be great to get riders to and from the Jessup Station. One advantage to high density development like that found on Route 1 in Jessup/Elkridge is the fact that huge a mass of people can live within steps of a shuttle bug stop making the incentive to take the MARC to work that much greater. 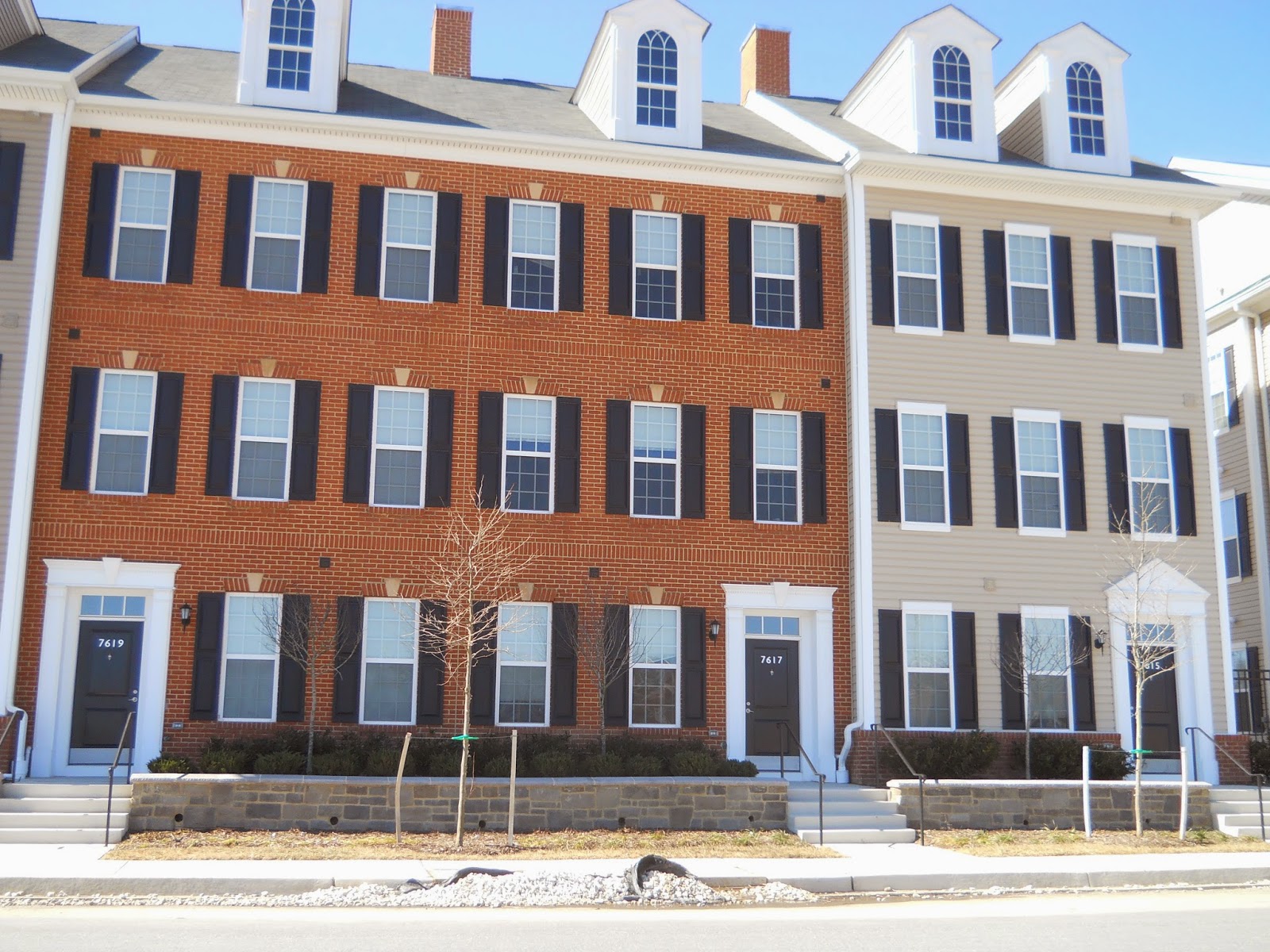 So why call it the Yellow/Orange Shuttle bug? The name pays homage to the 2002 Baltimore Regional Rail Plan's vision. In the plan, Baltimore's MARC Lines were to be localized with the Camden Line being dubbed the Orange Line and the Penn Line being dubbed the Purple Line. These lines will share tracks with the more regional MARC Lines as well as stops. The new "localized stops" will not be for MARC trains, only for the Orange and Purple Lines. If you recall on my previous post in my quest to get Rail Transit to Columbia, I proposed running the Yellow Line along the tracks that serve the Jessup MARC Station. Given that the Yellow and Orange Lines would run along those tracks, I propose that the shuttle bug be named; The Yellow and Orange Shuttle Bug. 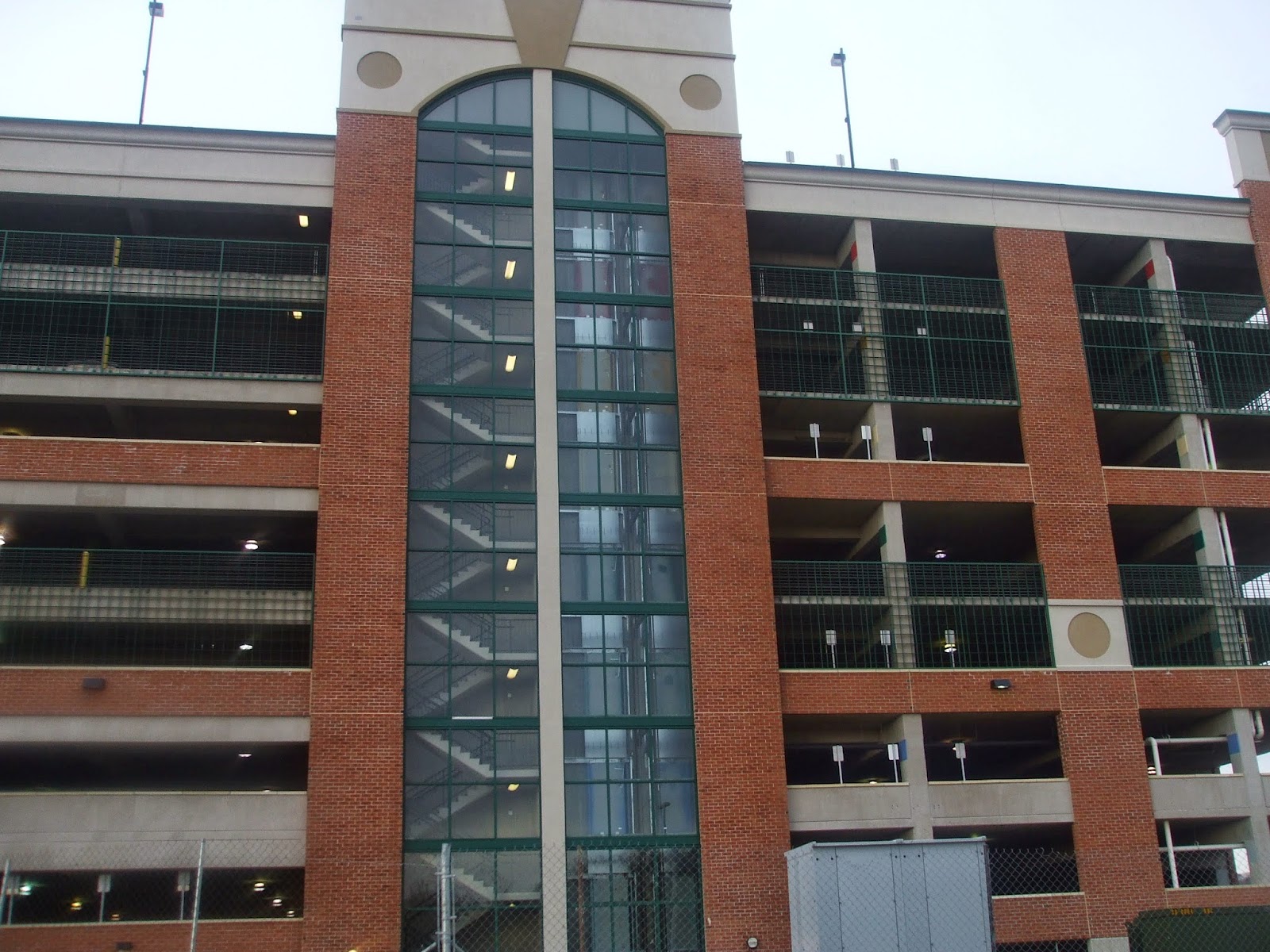 Then there's parking. Not everyone would want to take the Shuttle Bug and would prefer to take their own cars. This is where expanded parking comes into play. On the site of the current meager parking lots, a parking garage (like that pictured above) would rise to serve the needs of the growing population and invite them to take the MARC. 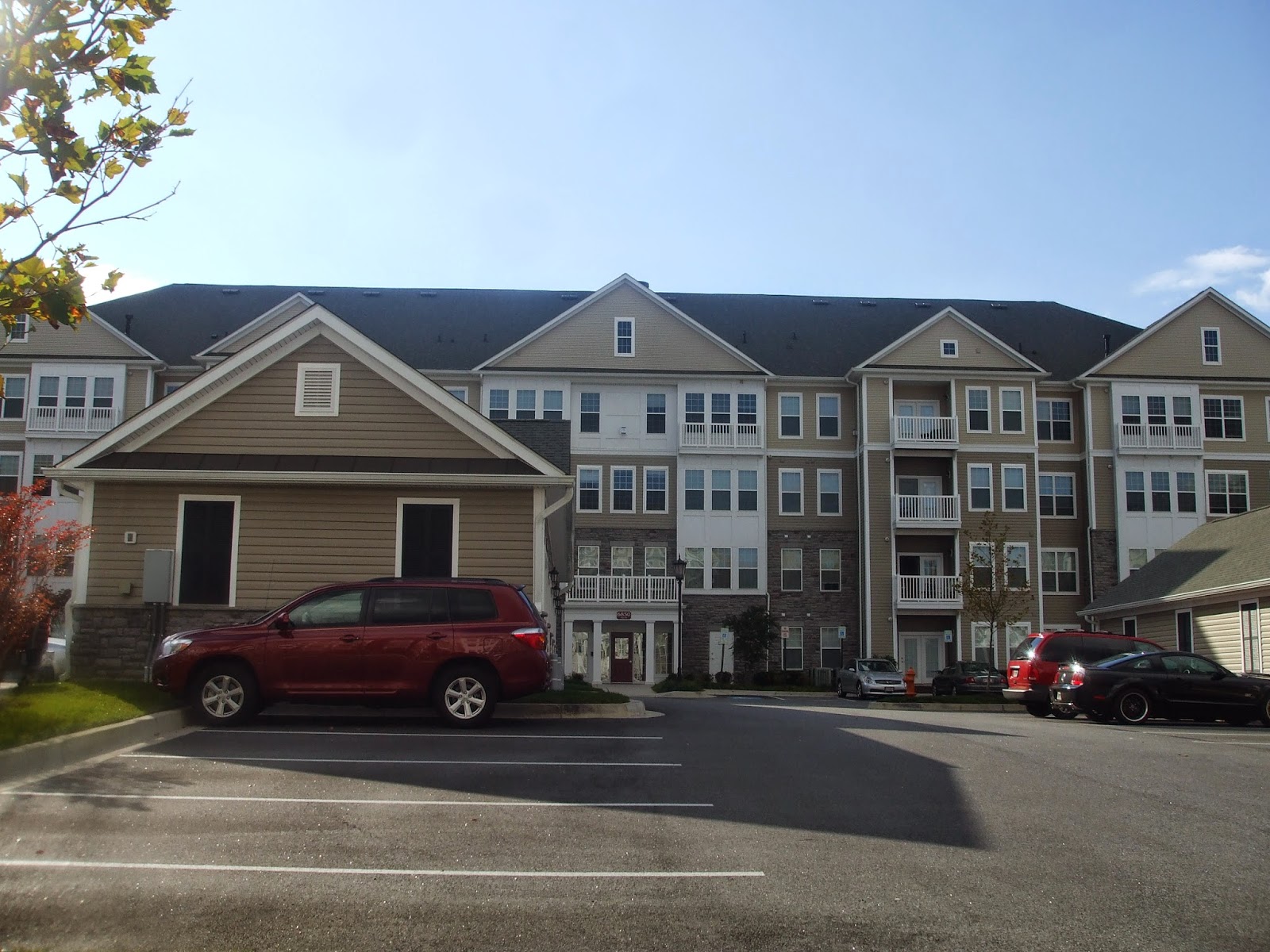 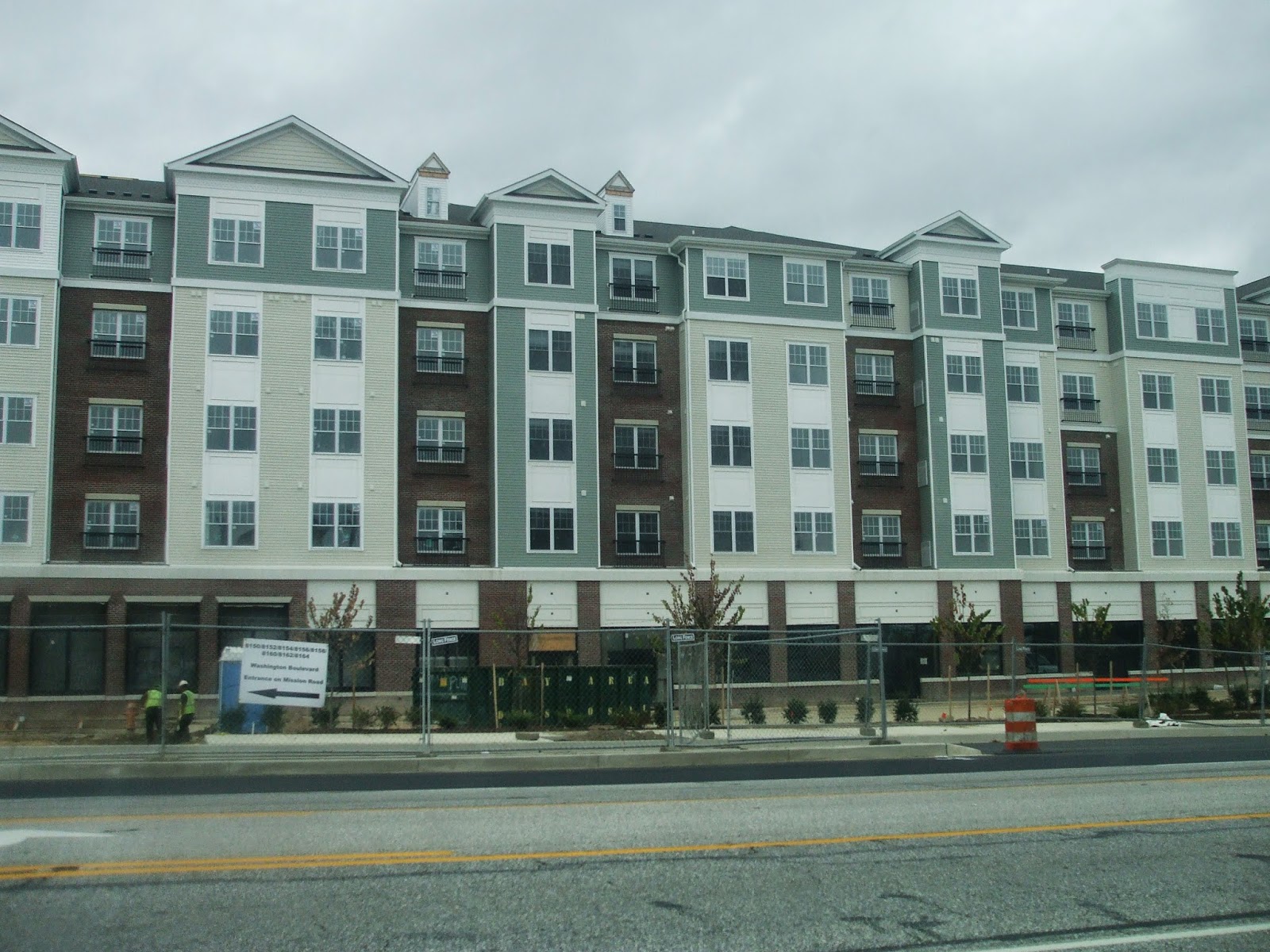 The large amount of high density development in Jeesup/Elkridge is comparable to true TOD except for the mere fact it's not actually steps away from a Transit Station the Yellow/Orange Shuttle is an attempt to remedy this by providing the convenience of TOD and ease traffic along Route 1 while doing so. 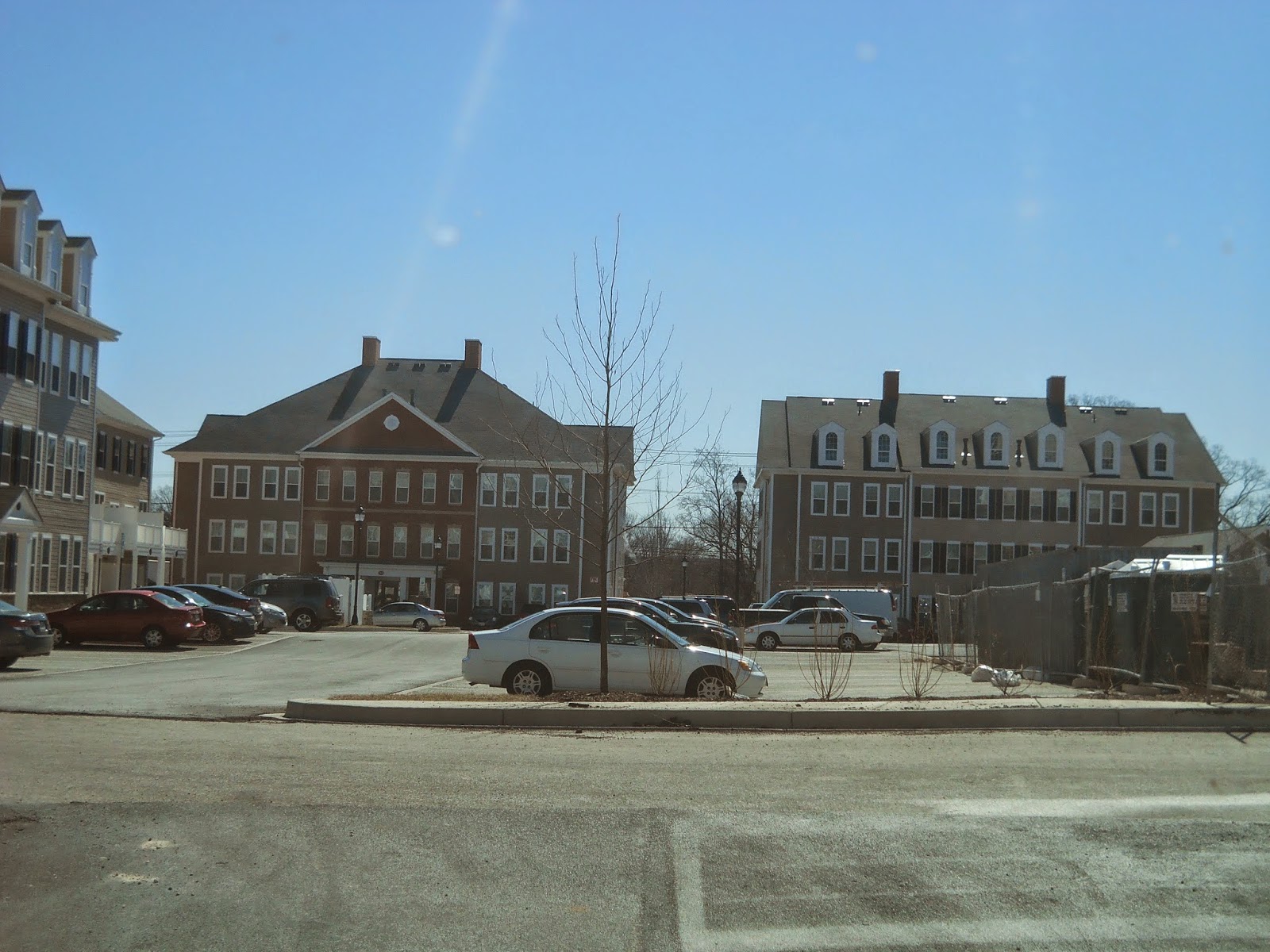