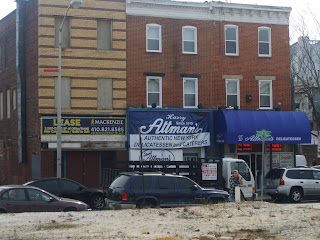 Jonestown, among the first three settlements of Baltimoretown has earned the right to be called Historic Jonestown. Just walk down the streets or take the Heritage Walk Tour and you will see and understand centuries worth of history. Here are some sites that tell you just how much history is in this neighborhood just east of Downtown and north of Little Italy that can be easily overlooked but it's a must see for any history buff. 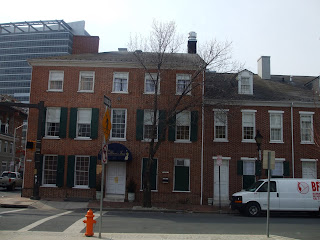 The Shot Tower, Charles Carroll of Carollton Muesum and Inn, The Flag House, The Civil War Museum, The Lloyd St. Synagogue and Museum (B'nai Israel), the African American History Muesum, and Corned Beef Row all make Historic Jonestown a special part of Baltimore and the nation beyond it. The Shot Tower played an important role in winning the war of 1812, The Flag House helped inspire Francis Scott Key to write the "Start Spangled Banner" The Llyod St. Synagogue is the among the oldest in the nation. 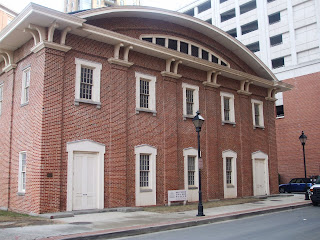 Since the first bricks were laid Jonestown became home to Immigrants from all over Eastern and Southern Europe; Italy, Greece, Poland, The Ukraine, Lithuania, and Russia who came to America through Ellis Island and Baltimore's own Locust Point. They lived in tenement housing sometimes up to 15 people living in one room with no indoor plumbing or heat. They worked in nearby Shipyards, Clothing Factories, Delis, Wholesalers, and Canneries. Although living in working conditions in Jonestown were considered deplorable and disease ridden it was better than the conditions in their home countries, residents still had the American dream to make it big and encouraged their families still left in the old Country to Emmigrate to America. In the case of Jews more well to do German and Austrian Jews sponsored the immigration of fellow Jews in Eastern Europe. 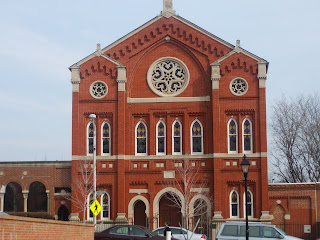 Despite living in poverty Jonestown flourished with Churches and Synagogues, Delis, Bakeries, Public Bath Houses, and Dairy Grocers centered on East Lombard St. from the 1800s up until World War II. As Jews made more money they moved northwest to Bolton Hill and Reservoir Hill making living conditions in Jonestown less crowded. Also the tenements improved with more indoor plumbing and stoves. Jews who moved northwest still came down to Lombard St. to do their grocery shopping seeing as it still had the best Kosher selection outside of New York. African American residents began joining European Immigrants in Jonestown. 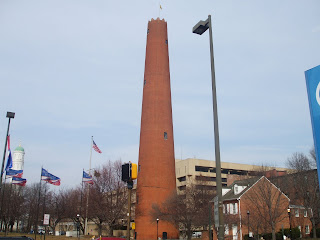 During World War II Jonestown became blighted as the housing stock was already 150 years old and the city thought that instead of renovating the existing housing stock it should be knocked down as was the nationwide trend at the time. This was the beginning of the end for Jonestown. In the northeast corner of Jonestown, a Public Housing Project called "Lafayette Courts" was erected in the early 1950s which was segregated to be all black. On Jonestown's southern border just north of Little Italy another Public Housing Project was erected in the middle of Lombard St. named "Flag House Courts" was originally an all White project. It became integrated pretty quickly as the Jewish flight northwest continued. The MLK riots of 1968 resegregated Flag House Courts as an all Black project. These two developments made up almost all of the residential portion of Jonestown. Jonestown was now an all Black neighborhood. After the MLK riots crime hit Jonestown like a ton of bricks. Businesses left in droves and Little Italy walled itself off Jonestown its once formidable neighbor. During the 1980s while the Inner Harbor, a few short blocks away was going through its revival, Jonestown was knee deep in the crack trade and all the violence that goes with it. 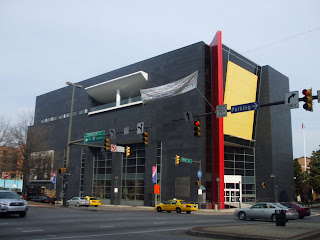 During the 1990s public housing high rises across the nation were in a dilapidated state. The Federal Government stepped in to help. Maryland's very own Junior Senator Barbara Mikulski best known for her successful attempt to keep I-83 from extending through Fels Point and Canton and crossing the Inner Harbor drafted the HOPE VI program that provides federal funds for public housing complexes to redevelop into lower density mixed income communities. Both public housing complexes in Jonestown were on the top of the list. 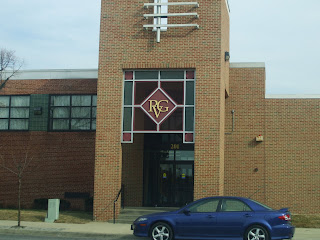 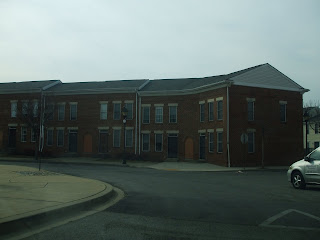 In 1998, the same year Pleasant View Gardens was completed, it was decided that Flag House Courts had to go. This new development would capitalize on its proximity to the Inner Harbor, Fels Point, and Little Italy. Developers had learned their lesson with Pleasant View Gardens. This new development dubbed "Albemarle Square" would feature a broader range of housing options. Albemarle Square features apartments and town homes with a mix of Public Housing (130 units), 52 section 8 units, 10 subsidized homeownership, 16 market rate rentals, and 135 market rate homeownership. This changed the whole face of Jonestown it became a neighborhood associated with the Inner Harbor's revival. Little Italy tore down the wall that separated itself from Flag House Courts and is seen as a "hot new address." Albemarle Square has been a huge success. 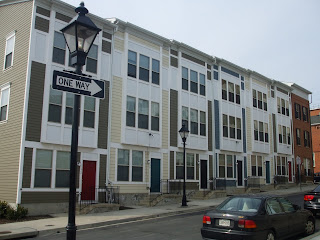 Now to say that Historic Jonestown is not so historic anymore would be misleading. All of the sites mentioned at the beginning of the post have been preserved for generations to come. However, if one walks the streets of Historic Jonestown you will see almost all new development and the old development you do see is historic sites and a few old homes and factories that quickly being rehabbed. You will also feel safe, something you couldn't say about Jonestown with the high rises. The only thing missing from Jonestown is Corned Beef Row. There are only three Delis along East Lombard St.: Attmans, Lennys, and Weiss. There is land available to build additional Delis to remake the Corned Beef Row that only exists in history. 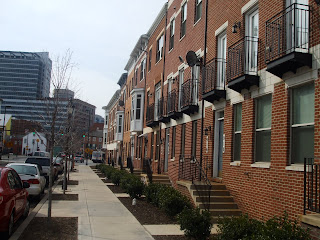 Historic Jonestown has a lot of history but it also has a bright future. 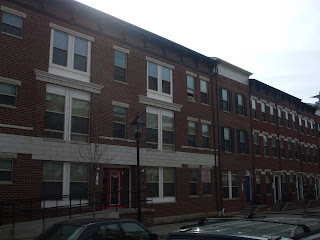 Nice post. Jonestown is an interesting mix of old and new indeed. One thing I think Baltimore does really well is incorporate new development keeping with the feel of the city. Being from the Midwest, this is not something I am accustomed to seeing. While the new building certainly stick out, they use plenty of brick to maintain the Baltimore aesthetic.