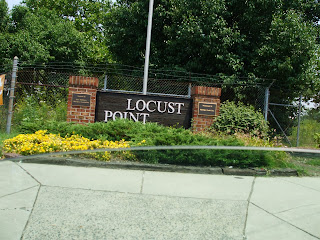 Development in Locust Point, despite all economic woes is moving along full speed ahead. Harbour Point, Tide Point, Silo Point, Green Harbor Point, the Townes at Locust Point not to mention small infill development and rehabbing old homes. Locust Point is the last frontier in waterfront development on the Inner Harbor. After the build out of Locust Point development will make a "U Turn" to the long neglected Middle Branch. 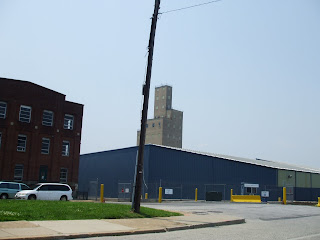 Locust Point, until very recently was and still is to a lesser extent an industrial port with a small residential component. The residential section was built obviously to house workers in the many plants, factories and shipyards that gave Locust Point its identity. Another attribute of Locust Point was its designation as Baltimore's Ellis Island. Immigrants from all over Europe came through Locust Point and went further up the South Baltimore Peninsula and usually to East Baltimore to seek a better life themselves and their families. Without doubt Locust Point's biggest claim to fame is its place in the war of 1812 where Francis Scott Key saw the American Flag still standing at Fort McHenry and inspired our National Anthem, the Star Spangled Banner. 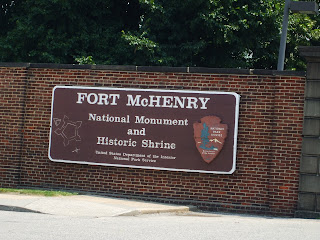 Through the remainder of the 19th and into the middle of the 20th century Locust Point thrived as an industrial hub due to its proximity to the water and B&O Railroad (now CSX lines). Locust Point played host to several industrial uses such as Tide Laundry Soap, Domino Sugar, and B&O Grain Elevator, the tallest and fastest! Several Marine Terminals called Locust Point Home as well. The housing stock in Locust Point was almost as old as the first settlement of Baltimoretown. The below photo is of housing stock that dates back to the Civil War located on Hullins St. 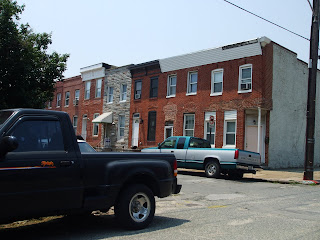 After World War II (I wonder how many paragraphs on this blog start with that) Jobs in this industrial sector began to dwindle due to advent of machines and computers that do the work that several hundred people used to do. That coupled with outsourcing of jobs hit Locust Point, a community whose residents worked primarily in industry particularly hard. Since Locust Point is engulfed by industry on all sides of it finding work for its residents was probably easier than in other communities. Urban decay that hit so many other city neighborhoods didn't hit Locust Point the way it did in almost all of Baltimore. Sure, a boarded up row house and a shuttered neighborhood watering hole weren't unheard of but the residents of Locust Point banded together and whethered the storm. Locust Point was a small enough residential community that everyone knew everyone by name and they had each others' back which it still does to this day. 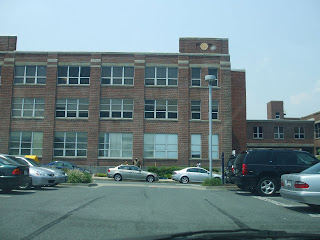 Today, despite our nationwide economic and real estate woes, Locust Point is experiencing a development boom. Land and buildings that were once used for industry are now being used for residential, office, and retail. The first such development was Tide Point, an old factory that manufactured Tide Laundry Detergent is now a mix of retail and offices. 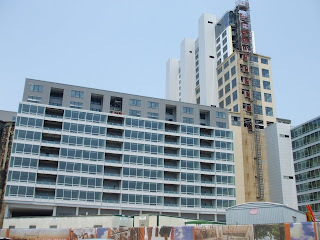 Silo Point, a former Grain Elevator used by the B&O Railroad that has been turned into luxury apartments. Also part of Silo Point are town homes adjacent to the former elevator. The town homes extend the residential part of Locust Point east towards Fort McHenry via Forte Avenue and parallel streets. Speaking of extending residential boundaries in Locust Point the line between Federal Hill and Locust Point has become blurred. There used to be a wall of industry separating the two neighborhoods but the "wall" has seen lots of redevelopment in both neighborhoods. First, the Locust Point side; there has been Harbour Point(not to be confused with Harbor Point in Fels Point), The Townes at Locust Point, and Green Harbor Point, the city's first "green" community. On the Federal side there's been Harborview, with its lone high rise, low rise condos and town homes with "the pinnacle" section which includes two more high rises coming down the pipeline (Harborview was originally supposed to consist of six high rises, nothing else), Federal Place Town homes, and The Ritz Carlton Residences. Perhaps the biggest reminder of the significance of Locust Point as an industrial haven is the Domino Sugar Plant. No fire or explosion will take it down. 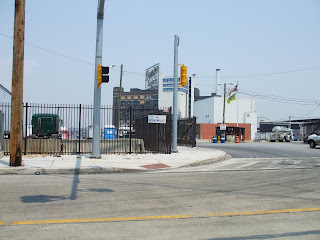 All of these new developments in Locust Point are beating the odds against our current economic situation and may serve as a model on how to continue building despite a recession. How does Locust Point do it? It's just Baltimore's next "Hot Spot" and the last neighborhood that faces the Inner Harbor that hasn't reached build out. Next up; Middle Branch 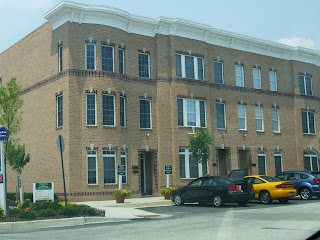 Hey it's me Spence
The Sun ran an article on Locust Point today June 23rd just a mere five days after this post was published. The article pretty much regurgitated my post and it just seems a little too convenient if you know what I mean

Developing it was one of the best decisions. For sure the residents will enjoy beautiful homes in excellent locations, with no home ownership hassles. Plus they are offered with superb customer service, resort-style amenities, and the reassurance of 24-hour emergency maintenance service.