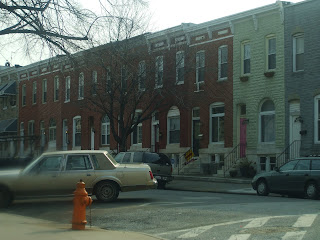 When most people think of East Baltimore they think of densely packed row house communities such as Broadway East, Berea, Ellwood Park, and Madison Eastend to name a few. Sadly these Neighborhoods have fallen on hard times resulting in a large population loss and rise in crime for the past few decades. There's another East Baltimore though, one that's worlds away from the aforementioned Row House Communities but in reality the "other East Baltimore" is only across either a Highway or train tracks which "connect" the two. Notice I said highways and train tracks and they have divided East Baltimore for too long. 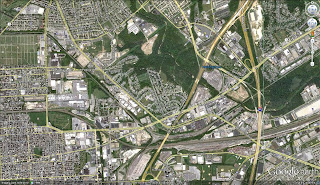 So what is this other East Baltimore? It's mostly an under utilized Industrial Area separated from the rest of the City and County for that matter by unnecessary highways and train tracks. Since highways divide this area so well I will divide it myself for the purposes of naming them all; there's the Orangeville Area, the Kresson Area, Pulaski Area, and Armistead Area. These differentiated areas will prove helpful as I attempt to write this post. 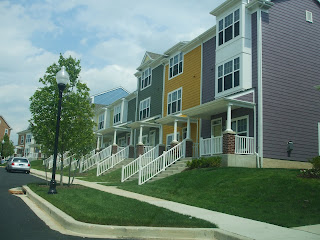 In the Armistead Area lies Orchard Ridge, a master planned community that of town homes built on the grounds of a former Public Housing Site. Given the fact that these were built in the middle of the recession and still sold like hotcakes, it shows that this area is an untapped resource. I'd also like to take this moment to say that not all highways here present a problem, in fact it's the proximity to I-95 that played a part in the success of Orchard Ridge and will play a part in further redevelopment of East Baltimore. 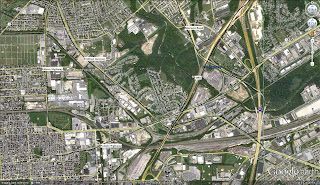 Now that that's out of the way, lets list some of the highways that need either go away or be downgraded to urban style streets; Edison Highway, Erdman Avenue, Pulaski Highway, I-895, and Moravia Road. This particular post reminds me of a series in the summer of 2010 called Reopening the great Northeast that called for the reopening of Gay St. and Harford Road traveling northeast from Downtown. That series didn't go far enough east so think of this as "Reopening the Great Far East." 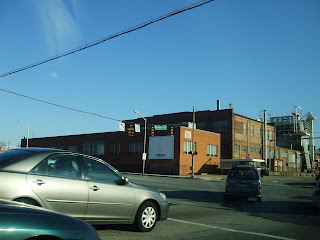 Of course I don't believe thriving industry should be given the boot so instead only industry that can be redeveloped right away and highways that can be made into City streets. The biggest such endeavor is I-895. 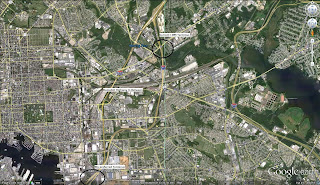 It meets I-95 at the end of both the Harbor Tunnel and Fort McHenry Tunnel but continues on, this portion is not well traveled and should be gotten rid of completely, which in turn would open the doors to new mixed use development. 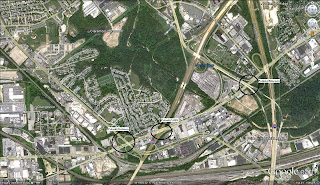 Pulaski Highway is another road that is guilty of dividing the industrial east. Its grade separated intersections with Moravia Road, Erdman Avenue and Monument Street should all be downgraded and narrowed to urban streets with signalized intersections. Since there is already a Pulaski St. in West Baltimore, Pulaski Highway will simply take the Orleans St., which is the name it uses further west in the City. 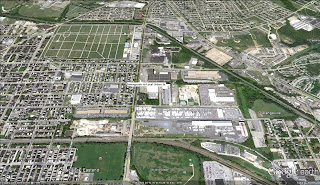 Edison Highway is another guilty party although it should more just be narrowed given that it doesn't have grade separated intersections. The road itself will be renamed "Edison St." which will be narrowed to two lanes in each direction with pedestrian signal upgrades. 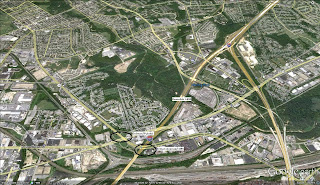 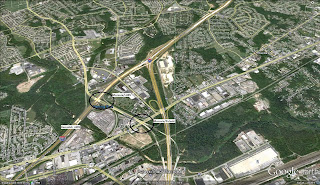 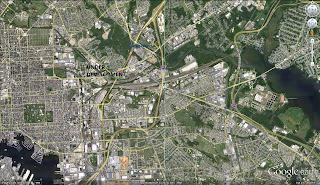 Highways have divided East Baltimore for too long and in order to save the area, the highways must go, stay tuned for next post dedicated to development in the same area.

Fascinating review of areas near where my late father 's bar stood--not far from Erdman Avenue...Kresson Street. Used to look a bit tired, now is VERY rough.
I enjoy your descriptions of streets, railroad tracks, highways and even grades!

I think in order to do what you propose you would have to seriously expand I-95. 895, pulaski highway, and erdman may not be too crowded on the weekends, but during my commute from the county east of the city they get just as jammed as the JFX. If you make those roads smaller, they will be so crammed up that drivers will divert to 95 which is already busy enough with these alternates in place.

Sac Hermes Kelly Autres said...
This comment has been removed by a blog administrator.
March 3, 2012 at 2:45 AM

Your proposals while admirable from a provincial standpoint are unrealistic and you know that. 895 at no point is barely used. They are refurbishing bridges not to be demolished. We aren't going back 50 or 100 years. Who pays for demolition? I am sure my comment will be replaced with "this comment has been removed by a blog administrator."

@Davepxxxv your comment is actually content related and therefore will not be deleted. The deleted ones were spam. Thank you for commenting and getting much needed dialogue going.