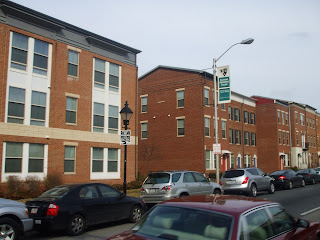 I have always had a fondness for happy endings. When looking at the night mare that was Flag House Courts and its redeveloped counter part; Albemarle Square, it doesn't get much happier than that, or does it? As much as I love Albemarle Square (it's my favorite HOPE VI development hands down) there are a couple of things missing that when added to the mix of uses in this new and historic Community Albemarle Square will be picture perfect. 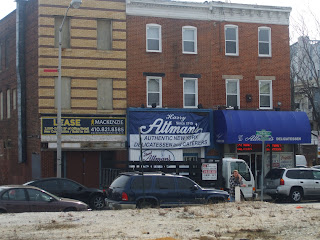 Historic Jonestown catered to Jews in its heyday. Actually it still does but in a much smaller capacity. Back then Lombard St. was known as "Corned Beef Row" and it was lined with Kosher Butchers, Delicatessens, Bakeries, and Grocery Stores. As Baltimore's Jewish Population began moving northwest, so did most of its Jewish Businesses. Today Corned Beef Row consists of three Delis; Attmans, Lenny's, and Weiss. During lunch time these Delis remain very crowded as East Baltimore's workforce pile in for a nosh. 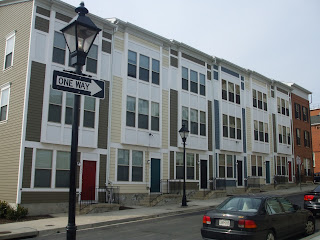 That being said, Albemarle Square was supposed to bring with it, a rebirth of Corned Beef Row. These vacant lots were supposed to contain live/work units that were going to give entrepreneurs a chance to restore Corned Beef Row to a busy bustling epicenter of East Baltimore above Little Italy. It won't be a Jewish Neighborhood like it was but given the success of the three remaining Delis, I think more Delis like them will still succeed.
I also think there's another key ingredient missing in Albemarle Square; Senior Housing. When building a mixed income Community, Senior Housing is a must. A lot of the people displaced when a development like Flag House Courts is demolished are Seniors. One reason they have remained in these dilapidated developments was because they literally had nowhere else to go. I'm sure you're thinking why not allocate some of the existing Public Housing Units in Albemarle Square for Seniors? That has been done a little bit but I will explain why that isn't the best course of action in the paragraph below. 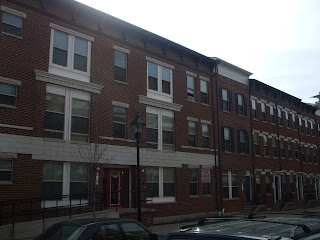 Senior Housing requires special services and amenities that aren't found in regular run of the mill homes. For example, the bathrooms would need bars, a higher toilet seat, and  a wheelchair accessible shower. Everything must be on one floor (no Town Homes) and rather than walk up Apartments or Condos, they would require elevators. In addition, features like automatic timed lights so that Residents don't ever have to enter a dark room would be a great addition to any Senior Development whether it's an independent or Assisted Living Facility. With Assisted Living Units, features should include "push for help" buttons that call on site nurses if needed. The buttons should be located at waist height and on the floor in case a Resident falls. Now, when building a development like Albemarle Square or any mixed income development for that matter, should ALL public housing units be furbished with all these features? No! And that is why certain units should be designated for Seniors only so they can get the amenities and assistance required and younger Residents will have regular run of the mill Apartments and Town Homes. 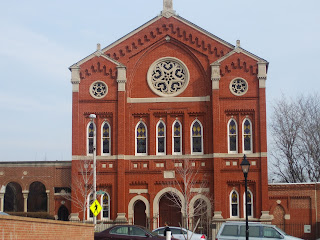 All of these Senior Buildings, located on Lombard St. will be three to four stories high with ground floor Retail. This is where Corned Beef Row can be reinvented. In fact, as an incentive to Jewish Business Owners there can be a Tax Credit to all businesses who wish to open on Lombard St. This includes Delis, Bakeries, Butcher Shops, and Grocery Stores that are predominantly or exclusively Kosher. I would like the existing Lenny's and Weiss to move into these new Buildings while their current buildings are demolished. If you notice, both of those buildings are one story and aren't in-keeping with the nature of Corned Beef Row. 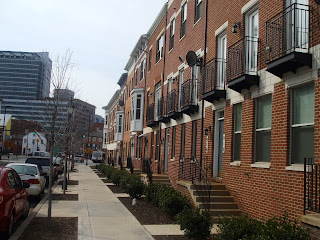 Albemarle Square, even if left alone is still my favorite HOPE VI development with its drastic mix of incomes and housing options. But if some Corned Beef and Seniors are thrown into the mix it will truly make Historic Jonestown thrive and Shine. 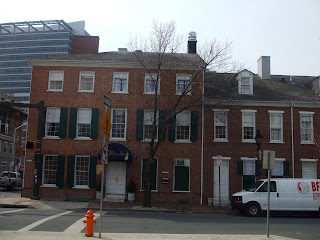