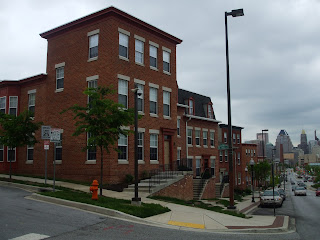 As I debut my series on East Baltimore between Downtown and Hopkins, I find it very fitting that I focus on the relationship of Downtown and the Neighborhoods nearby. Broadway Overlook is one of those Neighborhoods. It's a mix of Town Homes and Apartments some of which are in the Church Hospital Building. When walking through the streets of this new Neighborhood, I can't help but be amazed by how great a view of Downtown that Residents are treated to. Today Broadway Overlook is a mixed income Community that has Baltimore's best and quite the least expensive view of Downtown. 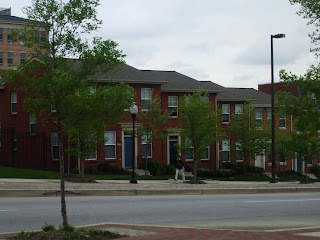 Broadway Overlook is the redeveloped evolution of Broadway Homes, a dangerous Public Housing High Rise, it stands to reason that before Broadway Overlook, Broadway Homes was also treated to a nice view of Downtown. How could a public housing development get such a great view of the City? The answer is more than half a century old so allow me to take you back in time. 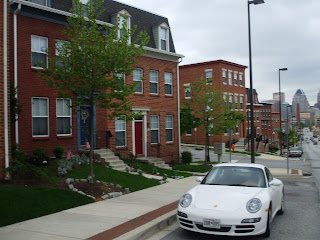 Living close to Downtown meant something completely different after World War II. That being said, Downtown was completely different after World War II. As Retail, Offices, and the Industrial Harbor were fleeing Downtown for the suburbs or in the case of the Harbor, disappearing forever. This made Downtown into a ghost town. Meanwhile, Neighborhoods that hugged Downtown were overcrowded. The wartime Jobs that accelerated the great migration from the rural South had evaporated but the new Citizens who had come for work didn't leave the City. At the same time for those who could afford it, the flight to the suburbs was in full swing. This made for an eroding tax base and an increase of poverty Citywide. 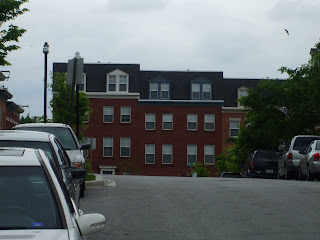 Neighborhoods that hugged Downtown had the most poverty and the oldest and most obsolete housing stock. At the same time it was the most overcrowded part of the City. In short everything surrounding Downtown was slums. Obviously something had to be done. The story of Baltimore's plight as a rust belt City is echoed all across large Cities in America. That is why HUD decided to dedicate a large sum of money to build new High Rise Apartments in poverty stricken overcrowded Cities across the Country. These new Buildings would have the amenities so desperately needed in these slums such as Refrigerators, Heat,and Indoor Plumbing. Given their proximity to Downtown, those living on the top floors could be treated to the same views as those living in a luxury Downtown penthouse. 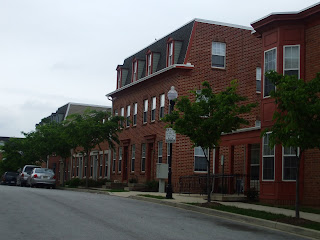 And so it came to be that East Baltimore between Downtown and Hopkins went from having overcrowded slums to having clean "modern" public housing complexes of some of which were high rises. For the first Residents of Broadway Homes & all new developments for that matter, their new community was a dream come true. These new buildings allowed them a higher quality of life that they were proud of. HUD had devoted a large sum of money for the demolition of the slums and construction of the high rises but how much were they continuing to give to maintain these larger than life structures? They didn't allocate any money for that. Maintenance fell on the City's back. Since Broadway Homes was a public housing development, it was pretty low on the City's bucket list because it didn't produce as much of a tax base than say Roland Park. Maintenance was non existent as the buildings fell into disrepair almost as quickly as they were built. Residents were simply forgotten and left behind. 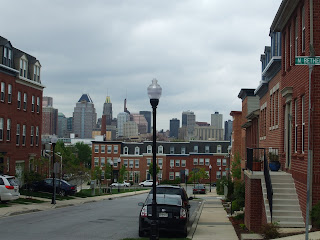 If you were left behind by the Government that was supposed to protect and defend you, how would you feel? If you answered angry and betrayed, you would feel exactly how Residents of Broadway Homes felt by the 1970s. Given the increasingly decaying buildings and the decreasing Police presence, crime, drugs, and violence replaced the memories of a healthy peaceful Community that the Broadway Home's first Residents remember. The high rises, although they looked very plain, were designed in a complicated manner which allowed criminals to hide out after the commission of a crime and others used that advantage to terrorize Residents. 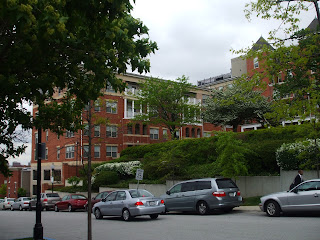 Elsewhere in Baltimore, Downtown began to make a turn for the better. The Central Business District began to re-centralize itself with the creation of Charles Center and eventually the redefinition of the Harbor from an industrial port to a tourist magnet. Eventually living in and around Downtown was and still is a sought after address. For the majority of Baltimore's history this has been the case, it was only after World War II that Downtown had become a ghost town. The success of Downtown did spread but only to certain Neighborhoods, remember so many of the Neighborhoods that hug Downtown contain public housing developments some of which were high rises and pretty much all of which were decaying. This contained gentrification to the southeast below Pratt St. 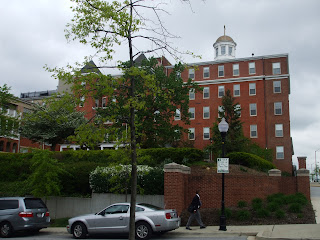 Broadway Homes and other public housing developments like it were supposed to provide a long term solution to the overcrowding and decaying slums hugging Downtown. By the 1990s it was apparent that Broadway Homes could not be revitalize in its current form. The same was true for all public housing high rise developments in the City as well as Cities across the Country. That's when Maryland's own Senator Barb stepped in and sponsored a bill known as HOPE VI. HOPE VI allocated federal funds to demolish and redevelop failing public housing high rises in urban areas and replace them traditional lower density housing. These mixed income communities would help break up large concentrations of poverty and attract outside investment. Although Broadway Homes wasn't the first development in Baltimore on the list, it was on it and the Feds realized its state of decay and provided funds for its demolition and redevelopment. 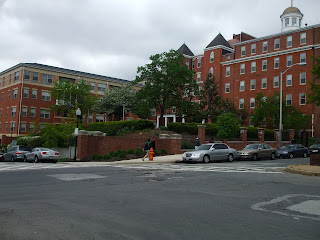 Now that Broadway Homes had been demolished, the time had come to rebuild and rebuild they did. The actual Broadway Homes site was given to Hopkins who swapped it for undeveloped parcel directly adjacent to the original Broadway Homes. Along Broadway, there Apartments were built which is what the old Church Hospital was converted to. Along Fayette St. between Broadway and Caroline St. are new Mixed Income town homes with a mix of public housing units, market rate rentals, and market rate home ownership. In the first few years of Broadway Overlook, the average median income of the area sky rocketed. Perhaps that great view of Downtown had something to do with it? 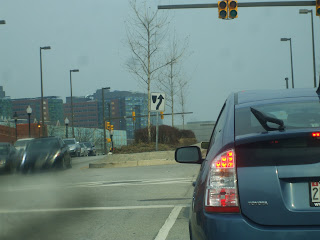 Broadway Overlook and other HOPE VI developments have begun the natural process of revitalizing all of East Baltimore between Downtown and Hopkins. The question remains; should the public housing units be converted into market rates due to the increasing popularity of the area and view of Downtown? Simply put, No. There are plenty of other developments in East Baltimore that can be rehabbed or redeveloped for Market Rate, and they also have great views of Downtown.

You've got a lot of info about the city here -- it's something for me to keep in mind if I ever visit.