Camden Crossing: Did We Jump the Gun? 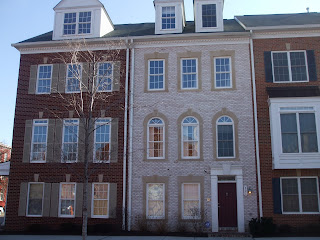 Pigtown has been in transition for decades now waiting and waiting to be Baltimore's next up and coming Neighborhood. It seems for every victory it achieves there are just as many defeats. As housing in gentrified Neighborhoods becomes more and more scares, wanna be Harbor Dwellers will look for a new Neighborhood. I would like very much for that new Neighborhood to be Pigtown. Now all that needs to be done is to make it a good sell. 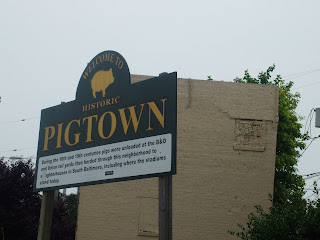 Pigtown in the early 2000s began showing a few signs of life, rehabbers had begun investing in vacant row homes and businesses along Washington Boulevard, the Community's Main Street. I truly believed Pigtown a this point was going to gentrify and be the next hip Neighborhood thinking that more vacant homes and businesses would be filled. 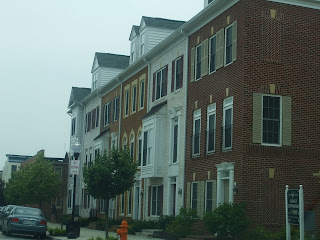 What happened was something I was not counting on. DEVELOPERS took an interest in Pigtown and announced their to redevelop a "Brownfields" site bordered by Scott St., McHenry St., Poppleton St. and Clifford St. Their intention which is now coming to fruition, was and is to build luxury garage town homes known as Camden Crossing. Now wait a minute doesn't this sound a little pre mature? I mean Pigtown at the time was just beginning to rebound after decades of blight and disinvestment and now a big developer is sucking all the would be rehabbers money out and into these over priced out of scale town homes?  I believe Camden Crossing jumped the gun and the history and reinvestment vs. redevelopment in other Baltimore Neighborhoods agrees with me. 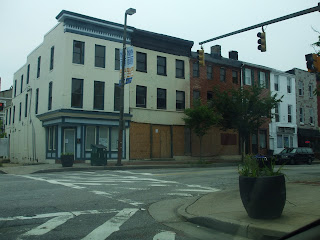 The catalyst for Residential growth in Communities Neighboring the Harbor was not Harbor Place or Charles Center as much as it was the Great Freeway Revolt. No I'm not talking about the infamous "road to nowhere" I'm talking about a the proposed route of I-95. It was supposed to run right through Otterbein and displace what was then a poor Neighborhood. Senator Barb built her career on the Great Freeway Revolt and successfully had I-95 rerouted and the homes in Otterbein saved unfortunately however the poor Residents had already been displaced. This is when Mayor William Donald Schaefer introduced the $1 row house program. The $1 row house program was intended to make homes affordable for owners to buy and take out what would have been a mortgage loan and invest it into construction instead. This saved Otterbein and many other Communities Neighboring the Harbor as well. 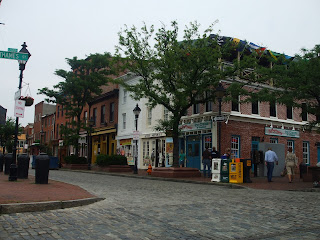 The Great Freeway Revolt was not just the placement of I-95. There were also plans in place to have the JFX continue as a highway past Fayette St. through Fells Point (pictured above) and Canton along Boston St., cross the Harbor and meet I-95. The number of row homes that would have been destroyed was staggering. As Residents and non Residents of Fells Point and Canton revolted against this freeway with the help of Senator Barb, outsiders couldn't help but gain an appreciation for the old row homes of Fells Point and Canton. 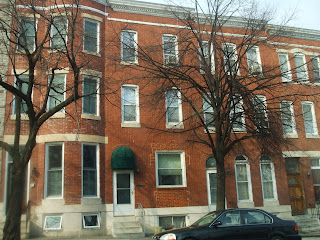 Thus, as the Great Freeway Revolt claimed another victory, people began buying and rehabbing vacant row homes in Fells Point and Canton using the $1 row house program that originated in Otterbein. As the supply of these old row homes dwindled so desire to live there did not. Some would be Residents began seeking old row homes north of the Harbor in Upper Fells Point, Butcher's Hill , Patterson Park(pictured above), Greektown, and eventually Highlandtown. Others who still wanted a Fells Point or Canton address moved into Glitzy new Apartments and Town Homes built on vacant land. This has been the history of reinvestment vs. redevelopment in Baltimore; rehab existing homes first then once that supply has been exhausted, build new homes. 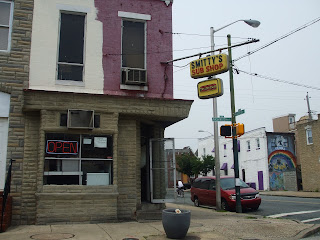 This brings me back to Pigtown. When Camden Crossing was built had the Neighborhood been void of vacant homes? Nope! Now don't get me wrong I don't dislike Camden Crossing I just think a lot of these buyers would have invested in the existing Pigtown housing stock had Camden Crossing not been built. I also look at Camden Crossing as a self sustaining fortress. It's hard to get in and out of which gives me the feeling that perhaps they're not very integrated into Pigotwn i.e. patronizing businesses along Washington Boulevard where they're desperately trying to make it a class A Main Street. 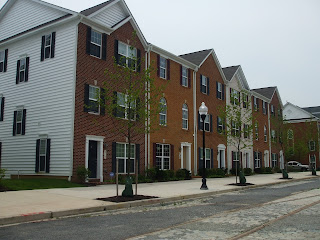 Camden Crossing has been a phased development. It was not complete at the time of the housing crash and that has delayed phases for years. Some phases have yet to be built. Luckily there have been some new homes finally starting to go up in the final swathes of land and they have been selling well. For what it is I would call Camden Crossing a success. It would have been a greater success had it not jumped the gun and been built after the existing housing stock was gentrified. 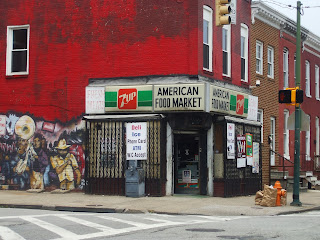 So that's it right? No more new development in Pigtown until existing housing stock is gentrified right? Wrong, there are plans to build 99 condos and town homes on a vacant surface lot. This new development (whose name is unknown) is slated to be workforce housing. Although more quality workforce housing is needed in the City I believe that can be found in existing housing stock throughout Pigotown. If the City reinstated the $1 row house program home owners can pay off their construction loan in lieu of a mortgage. Not only that, the City will have a smaller stock of vacants on their hands which instead of costing them money they will now make money because the homes are occupied and its owners are paying taxes. 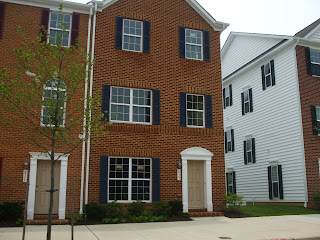 Was I ever against Camden Crossing? No I just believe they jumped the gun. Am I against this new workforce housing development? No I just believe that if it got started now we would be jumping the gun yet again. Do I want Pigtown as a whole to grow and become a destination Neighborhood? You bet! Do I think Pigtown can do it? Absolutely! 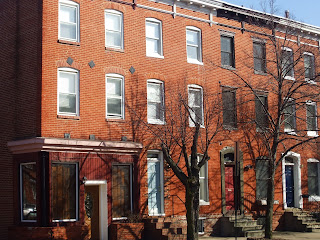 Great write-up, I am a big believer in commenting on blogs to inform the blog writers know that they’ve added something worthwhile to the world wide web!
studio apartment london

Thanks for your valuable information and sharing your photos.

Hey - just wanted to say I stumbled upon your blog and appreciate the effort you're putting into it. Interesting reads for sure. Cheers.