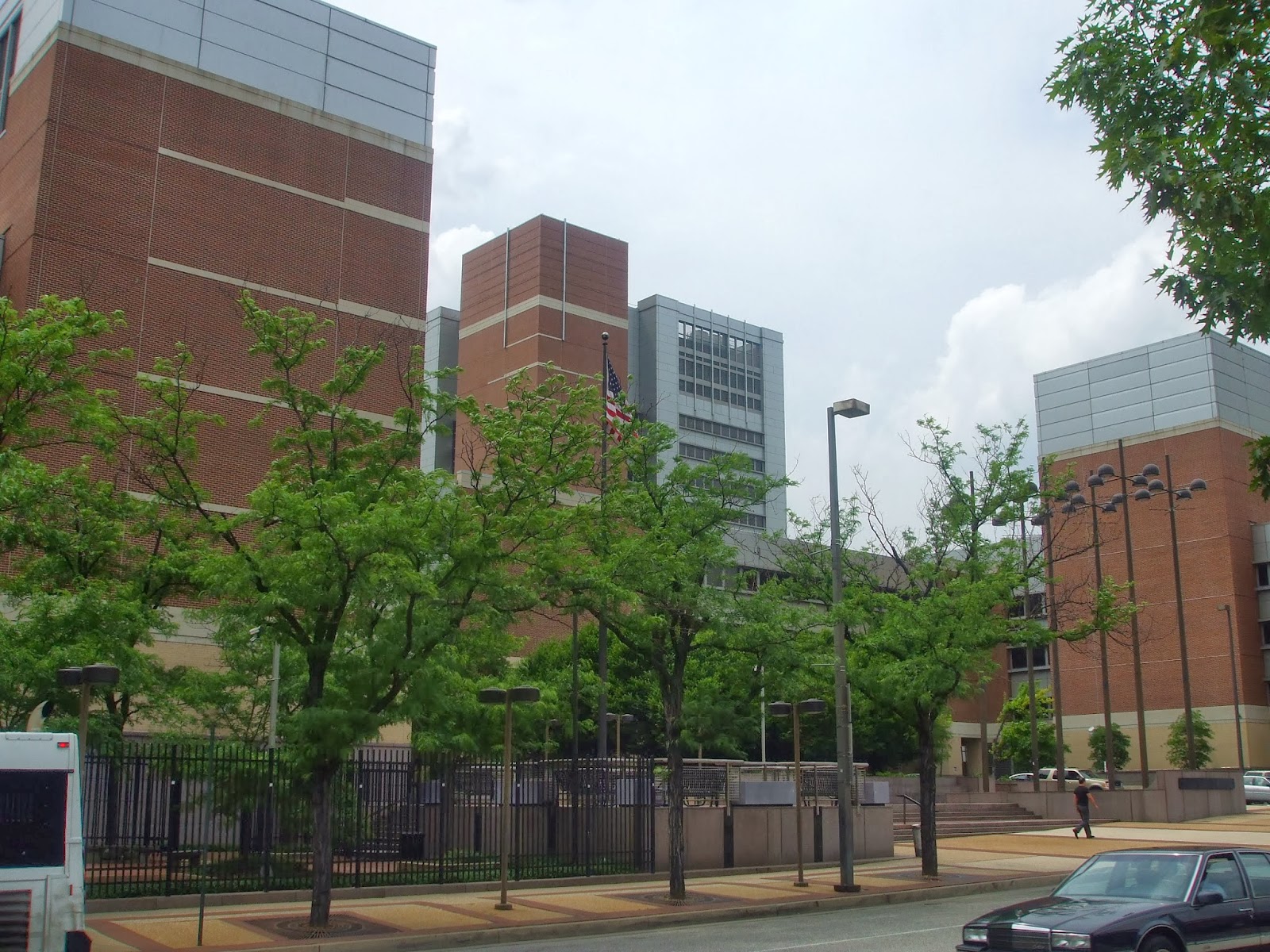 The behemoth Social Security Building in Downtown's Westside is going to be vacated. Advocates for the rebirth of Downtown's Westside call it a blow to the area. Granted the loss of 1600 Jobs will no doubt have an adverse effect on the area but from a design/planning perspective, I think it's time that the two block sky-way connected building(s) with a monster parking garage be razed in favor of mixed use development that will connect the Westside of Downtown with its Neighbors to the west. Perhaps crossing MLK Boulevard might not seem so taboo. The Social Security Complex originally moved to this newly constructed Super Block fortress as part of an Urban Renewal Effort with the theory that bringing public jobs Downtown would fuel private investment in the already ailing Westside of Downtown (pictured above). This did not occur and Downtown felt became all the more blocked off from West Baltimore as a result. Connectivity between Downtown and West Baltimore had already weak due to the Road to Nowhere, MLK Boulevard, and the crime ridden high rises of Murphy Homes and Lexington Terrace on either side of the Road to Nowhere. 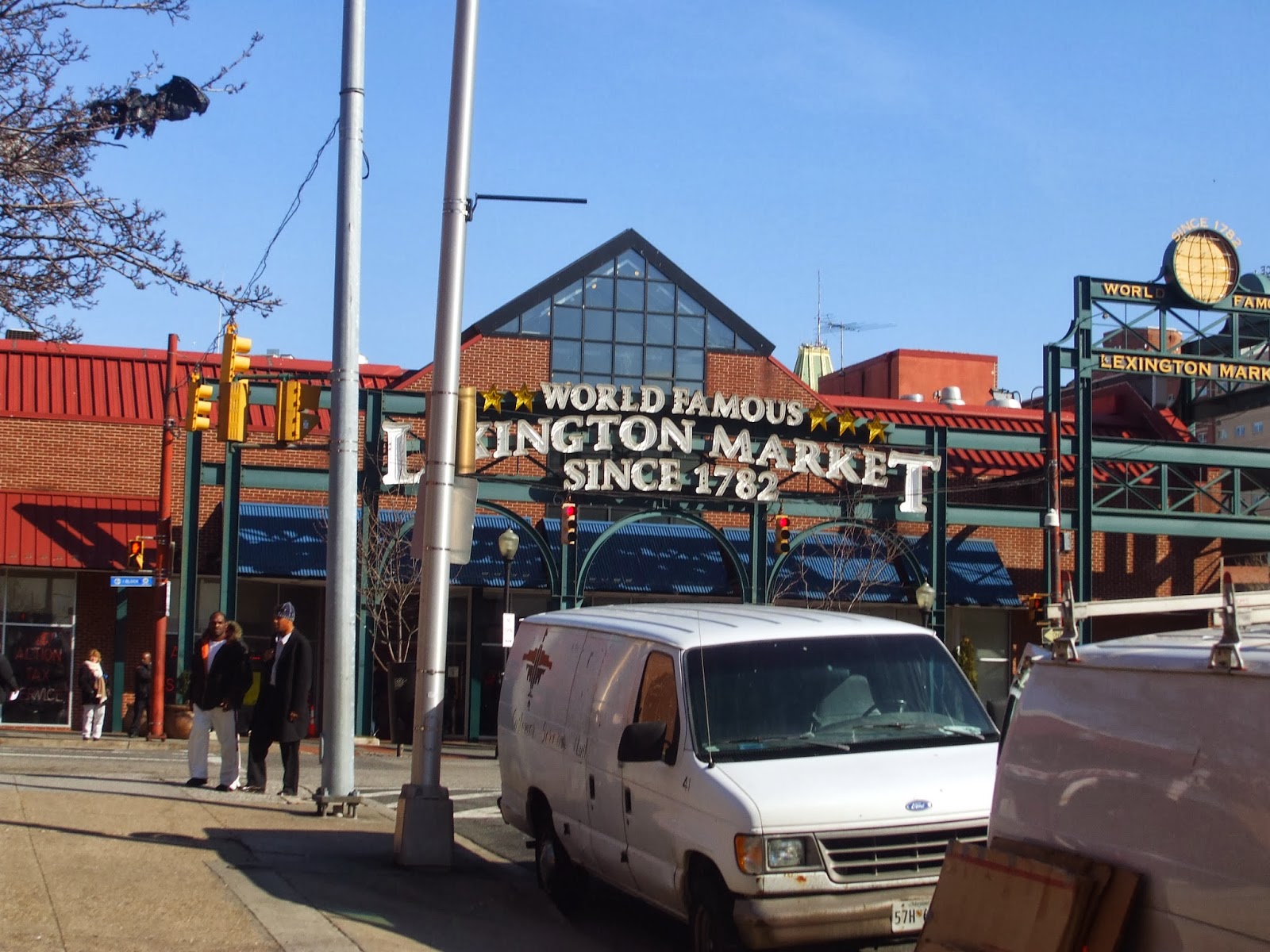 Today this area of the City along with State Center, Lexington Market (pictured above), and the Super Block represent some of the most potential and hope for Downtown, Downtown's Westside, West Baltimore and the City as a whole. It's time too streamline development plans so that each parcel of land has its full potential recognized. It's also important to note that there are some bright spots in the area, both Lexington Terrace and Murphy Homes have been torn down and replaced with The Townes at the Terraces and Heritage Crossing respectively and the new Red Line is slated to run right through the area. Just to the south in Lexington Market is the potential for a transit hub connecting the existing Light Rail, the existing Subway, and the Red Line. 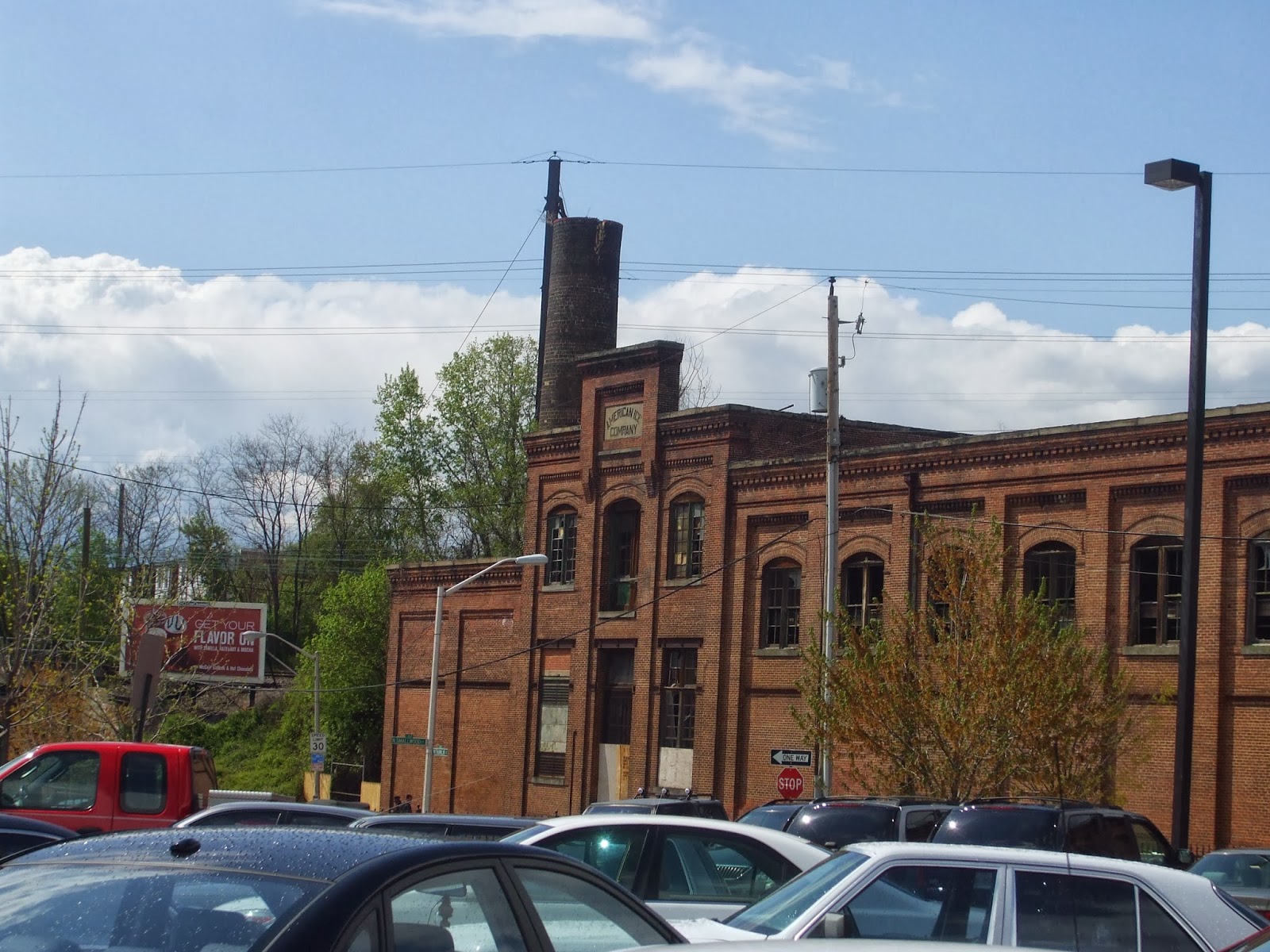 Before any real dialogue can take place regarding the redevelopment of the soon to be vacated Social Security Complex, we must first talk about the Road to Nowhere. I find that to be the biggest hurdle in opening up the barriers between West Baltimore and the Westside of Downtown. Currently there is a Master Plan for dismantling and redeveloping it however it has an obvious fatal flaw; they're doing it backwards! The plans for redevelopment start at the opposite end of the Road deep into West Baltimore at the MARC Station (pictured above)where the redevelopment energy now in Downtown's Westside is still eons away. 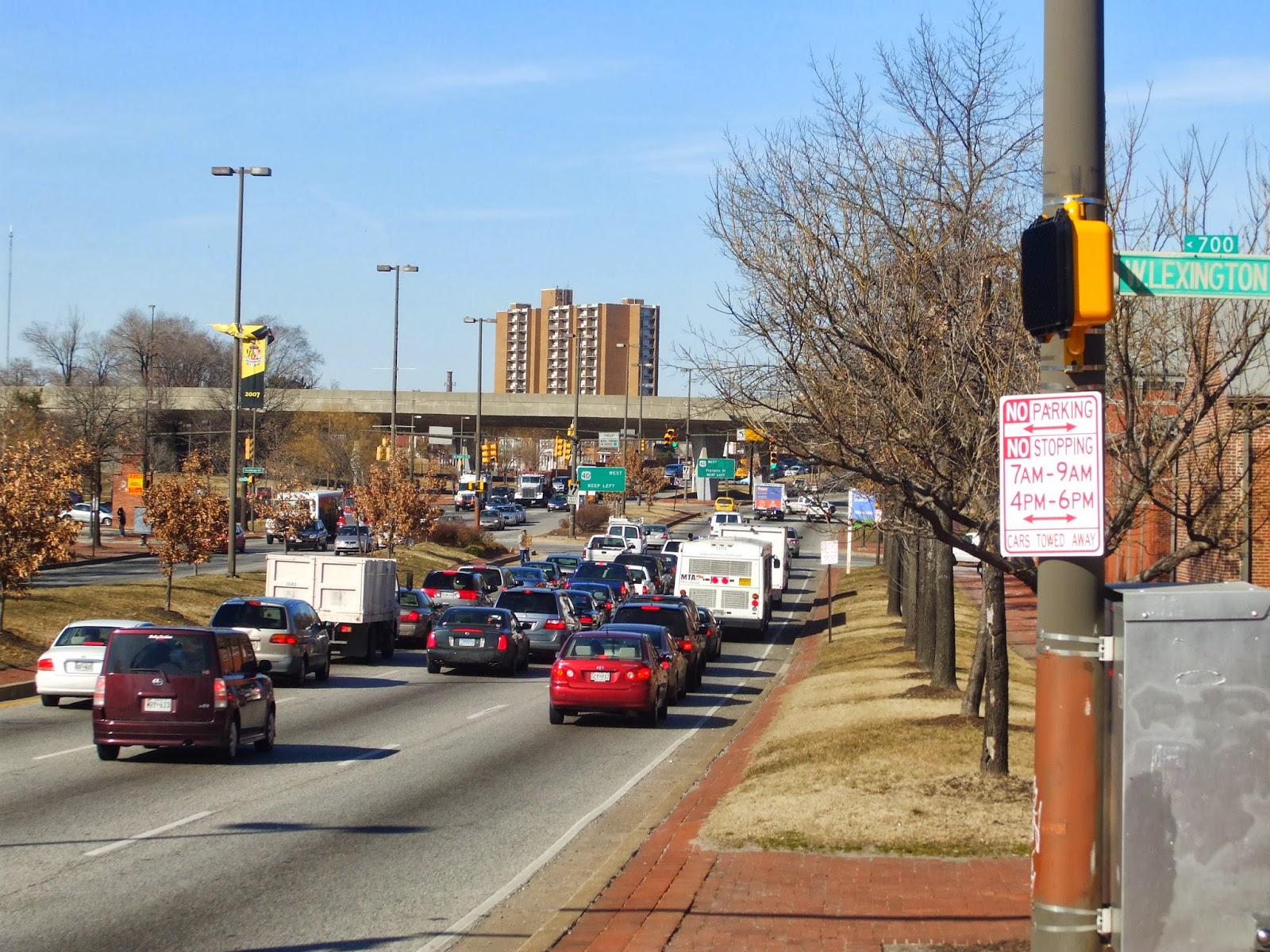 When it comes time to demolish the Social Security Complex, it must be done cohesively with the Road to Nowhere. As soon as the larger than life than life intrusion hits the wrecking ball, so too should the bridges (pictured above)that carry the Road to Nowhere traffic over MLK Boulevard and into Downtown where the re-assume being parts of Franklin and Mulberry Streets. Westbound, from Downtown Franklin St. traffic will never merge onto the Freeway as its right of way will be gone. Eastbound from West Baltimore, the freeway can remain almost in full except ALL traffic will exit onto the MLK Boulevard "ramp" thus eliminating the bridge. This idea for the Road to Nowhere is not my own, it was first proposed by fellow Blogger Gerald Neilly several years ago. I just happen to support it. 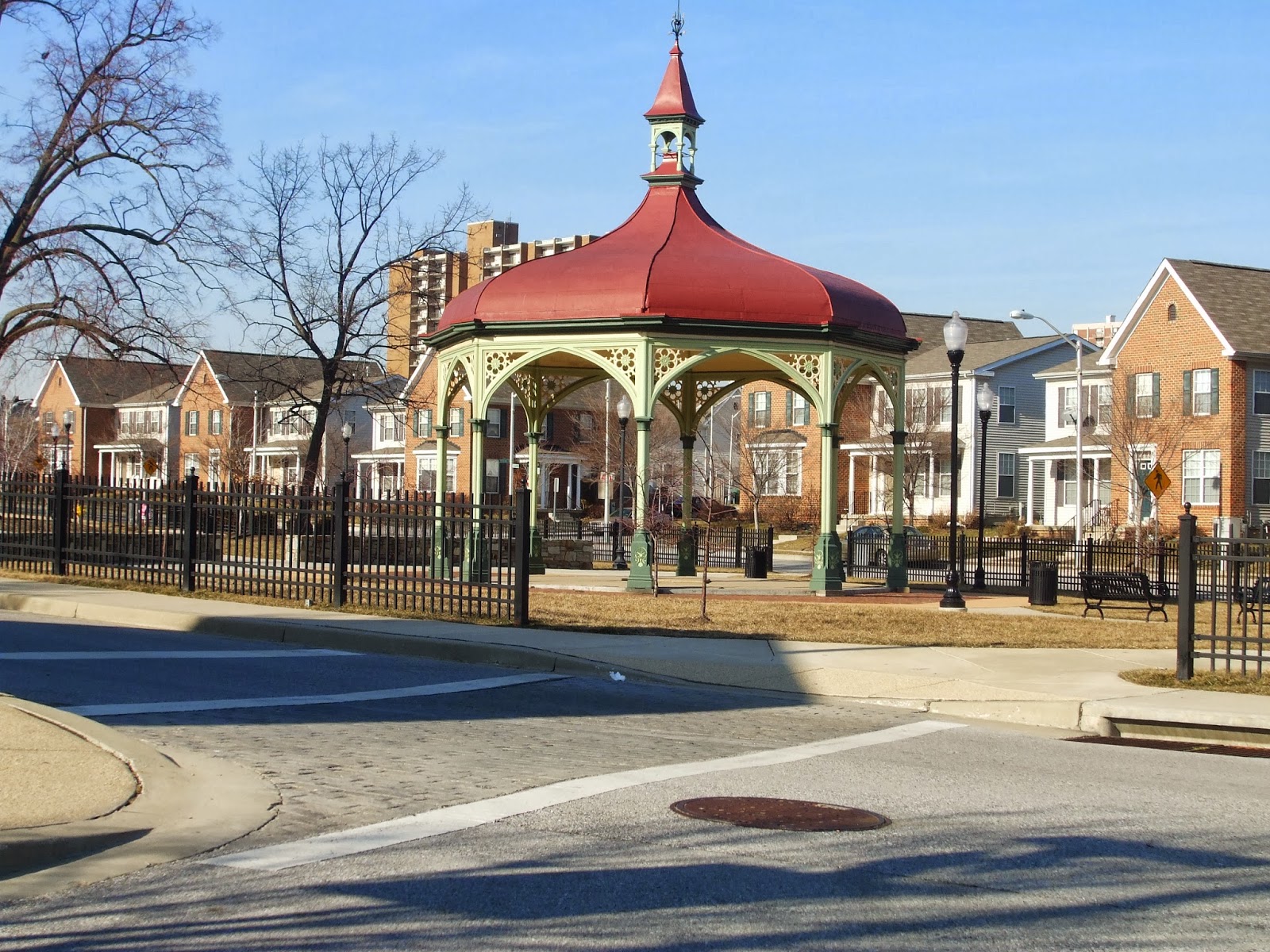 Now that the Social Scurity Complex has been demolished, we can finally have a real conversation about redevelopment. West of MLK Boulevard, I would build a Town Home Community to bridge together Heritage Crossing (pictured above)and the Townes at the Terraces. It will be a mixture of Home Ownership units both market rate and affordable. Fremont Avenue will be reopened between Franklin and Mulberry Streets and will serve as the western edge of this new Community. As for the Social Security Complex, I don't really know what to do with it at this time. All I can do is say what I don't want. 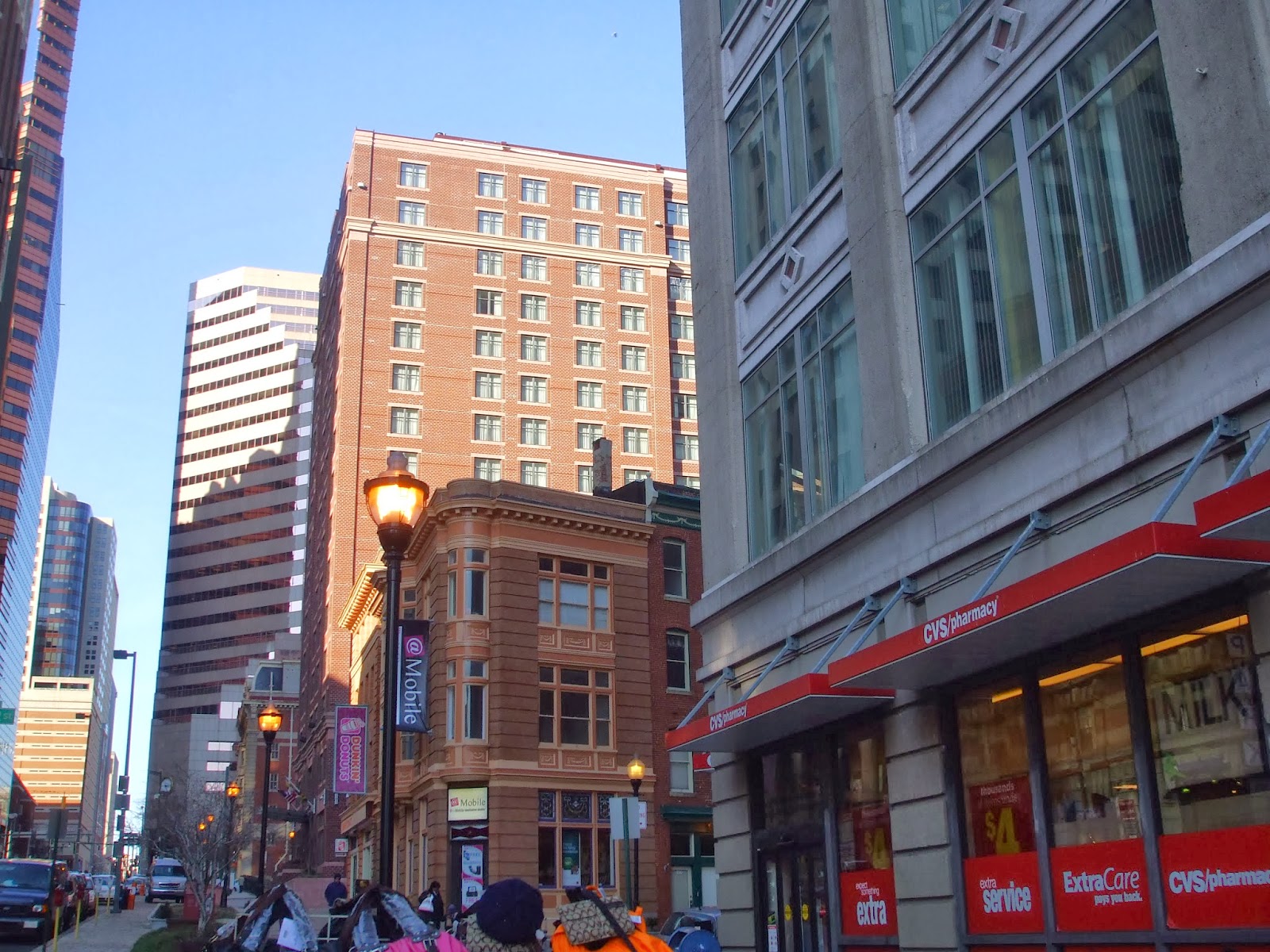 I don't want anymore Office Space. Well, I don't want anymore now. The City has way more Office Space than it can handle. The Central Business District (pictured above) has high vacancy rates as Offices have begun to move to Inner Harbor East and Harbor Point when it comes online. In fact if you read my "Keeping the State Out of State Center" post you will see that I intend on demolishing the State Center and having all of its Office Space move to the Central Business District to lower the vacancy rate. I would purposefully stall the any Office portion of State Center's redevelopment until the demand for it has returned. 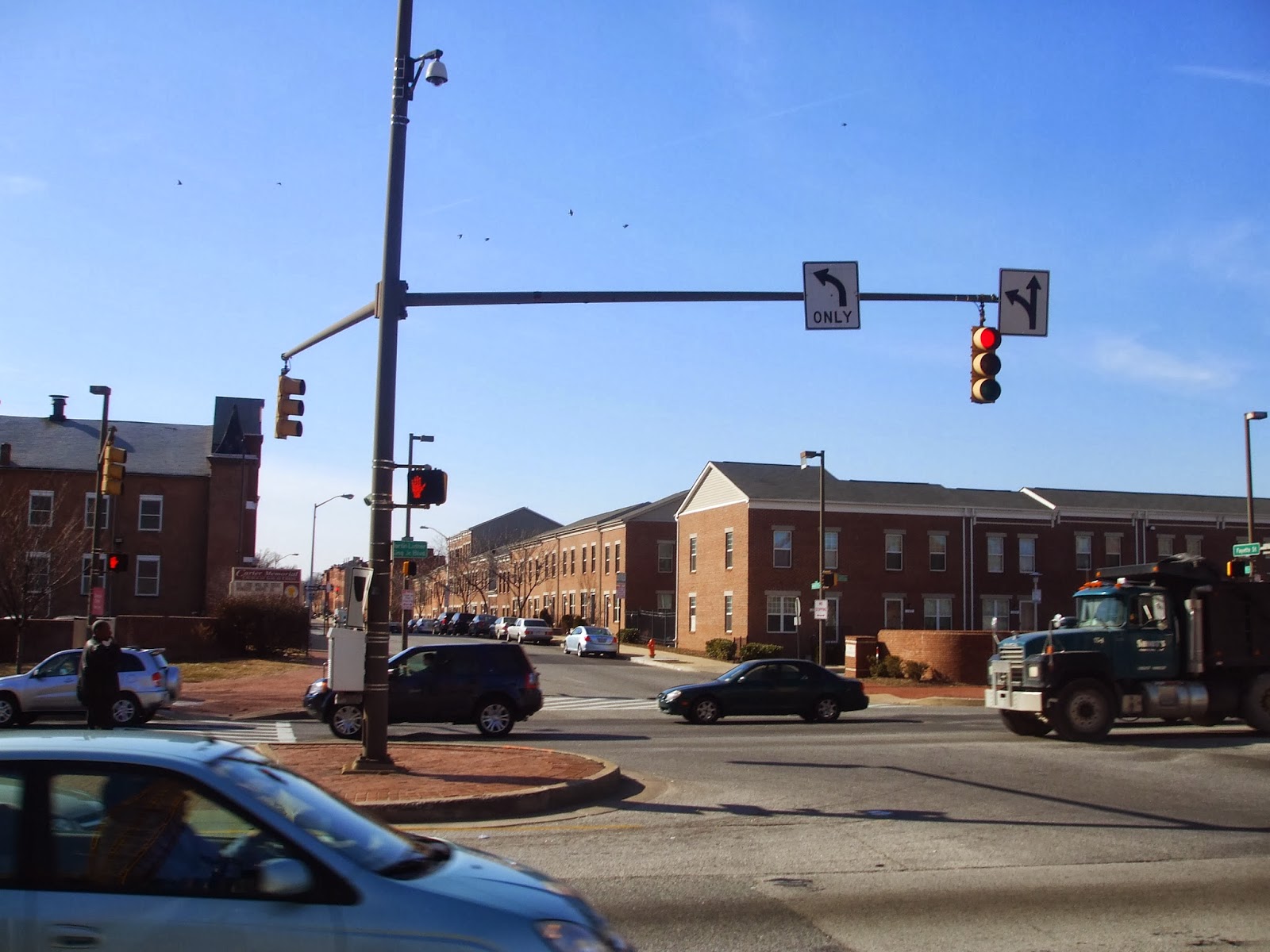 I also don't want incredibly tall buildings. I don't wall to wall off the Westside of Downtown from West Baltimore like the Social Security Building does already. A big reason I want the building gone is to create a seamless transition from the low density town homes (pictured above) west of MLK Boulevard into Downtown. Block by block the buildings should gradually get a little bit taller. New development can be high density without being very tall. Also I want to get away from parking garages that are visible. As the buildings get taller they should mask parking garages that will inevitably grow in height as well. Development should be mindful of the eventual Red Line, making room for would be stops. 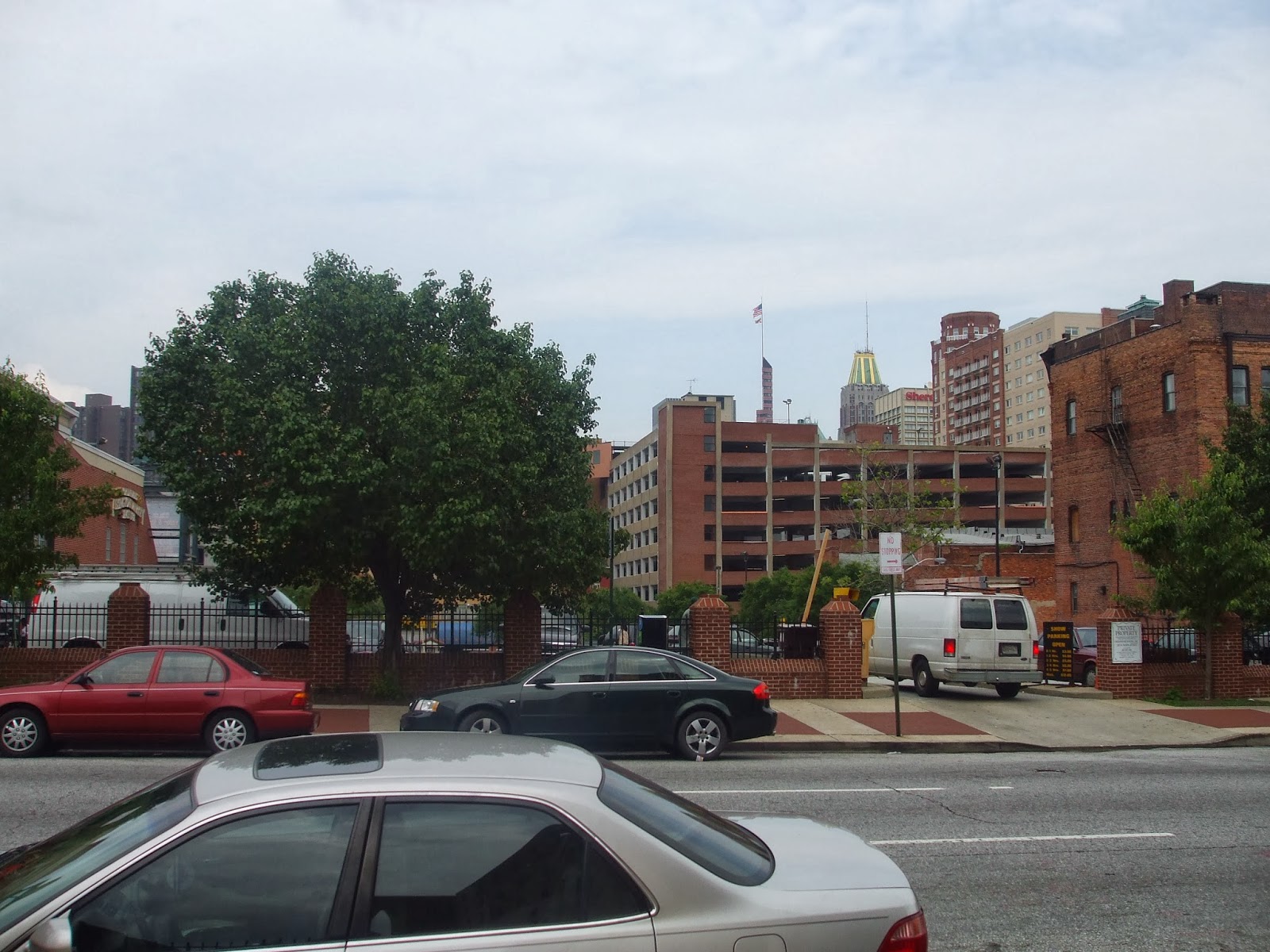 I'm pleased that the Social Security Complex is being vacated and relocated. I'm even more pleased that the jobs are staying in the City and I hope this means major redevelopment for the building and surrounding areas. One reason I'm being so vague about what could go in its place is that the possibilities are endless. It's no wonder that I'm pleased about the pending move.

Personally, I think that the social security complex would be a perfect location for a public safety headquarters. The current police hq is outdated and crumbling and in an awkward location at the mouth of I-83. Parking is a joke, resulting in police cars, both marked and unmarked, being parked blocking bus lanes and snarling traffic on Baltimore Street. The interior of the building is also in terrible condition with a weird labyrinth of hallways and creaking elevators. The offices are bursting at the seams. A public safety hq is in line with other cities, and can help coordinate resources between fire, police, sheriffs and school police more seamlessly. Having such an important anchor move to the west side of Downtown could also help with the revitalization of that neighborhood and give a much needed boost to the area restaurants, as well as Lexington Market. It would also be good to move the HQ away from the block. Though, I truly believe that the entire block should be relocated as well. The courthouse at Fayette and Gay is said to be too small and in need of expansion. Relocating the current Police HQ could free up space for a larger courthouse. But, I digress.