UMB Biotech Park: Not Enough By Itself 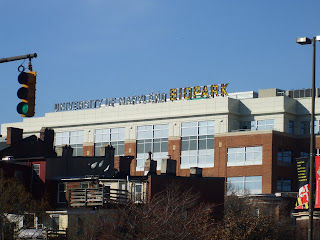 There is a new wave of urban renewal sweeping the nation's older blighted cities. The wave is Biotech Parks. Now why Biotech Parks? Biotech Parks provide lots of jobs and new residents to struggling cities while at the same time providing jobs to existing residents that don't require a lot of formal education. Baltimore is no different when it comes to bio sciences. Two Biotech Parks are being constructed one on the west side the other on the east side. The park in question is on the Westside. The University of Maryland is crossing Martin Luther King Jr. Boulevard to build its Biotech Park in the highly distressed neighborhood of Poppleton.
Poppleton fell when Baltimore's Black middle class fled for the outer city second hand suburbs leaving Poppleton to be left with high concentrations of poverty and disconnect through parkways and failed interstates. Today, a few blocks due south of Poppleton in Pigtown there have been signs of reinvestment and development with Camden Crossing and "Main Street" designation of Washington Boulevard. Even Poppleton has seen recent reinvestment with renovation of the Poe Homes public housing complex, 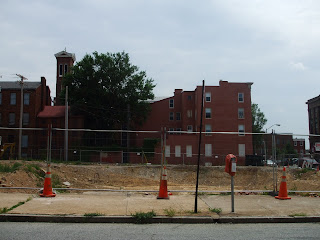 The renovation of Poppleton Place subsidized apartments, and perhaps the best of them all the tearing down of the Lexington Terrace high rises and their replacement the Townes at the Terraces (terraces). Although this investment in the community has been great it has done very little to raise the 17% home ownership rate and the 48% of residents making under $10,000 a year. 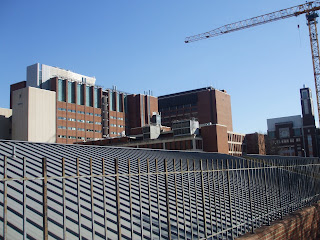 Across Martin Luther King Jr. Boulevard sits the University of Maryland Baltimore Campus. This ever expanding campus has done wonders for the southwestern edge of Downtown. The constraints of space however eventually took its toll on future plans for expansion, particularly in the Biotechnology field. The University took a bold leap of faith and decided to build its biotech park in Poppleton. Crossing west of Martin Luther King Jr. Boulevard was not something for the squeamish a few years ago. Never the less acquisition commenced and demolition began. In 2005 the first building opened. When completed the park was to have 6 office buildings with ground floor retail and a parking garage but pretty quickly the size was bumped up to 10 buildings. The second building is set to open this year. The park's location is on West Baltimore Street where new development is desperately needed. 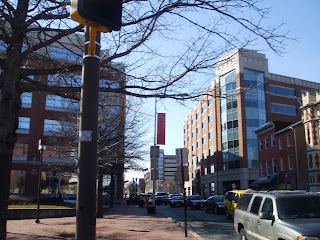 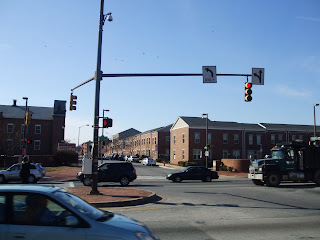 As public housing residents move out of Terraces the city can sell that unit at market rate or offer it as subsidized home ownership. Subsidized home ownership can be offered to existing terrace residents as well. Given that the Terraces are new homes their marketability is relatively easy. As it stands now Terraces have 250 public housing units and 100 market rate home ownership and 41 market rate rentals. What i'd like to see is 75 public housing units, 75 subsidized home ownership, 75 market rate rentals in addition to the 41 and 66 market rate home ownership in addition to the 100. Terraces has a peice of land with frontage on M.L.K. Boulevard that was never built on that can used for additional units. Now if the city sells off some of its public housing units it will have turned a profit right? Now how can the city spend this money to benefit the area? Redevelop Poe Homes? Yes, although modernized in 1989 Poe Homes is still the city's oldest public housing development and its units would be harder to sell than Terraces. In place of Poe Homes would be the mixed income community of Edgar Allan Place with a mix of income and housing types. The new development would reopen Poppleton St. between Lexington and Saratoga Streets where the current Poe Homes has it closed off. Income types would range from public housing and subsidized home ownership to market rate home ownership with an even split between the three. Housing types would be two two story town homes stacked over top of each other for four level structures and two story town homes over top of a one story apartment. One thing that happens when public housing or any blighted urban housing is torn down what goes in its place is of a lower density therefore suburbanizing it. The new Edagr Allan Place I'm proposing keeps density high maintaining its status as an urban neighborhood. The third low income development is the privately managed Poppleton Place. Poppleton Place just went through a renovation by its owners Hampstead Properties whose portfolio is exclusively low income developments. I don't propose changing Poppleton Place. Now that the concentration of poverty on the eastern edge of Poppleton has been broken up we can focus on the west side. 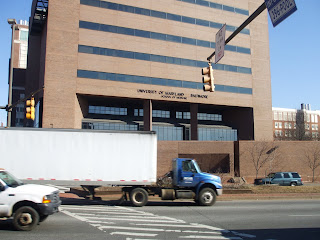 West Poppleton, although void of public housing has farred much worse. There are very few intact blocks that can be saved and sold for rehabbers. Also in West Poppleton are two schools housed in the same building. The schools are James McHenry Elementary and Southwest Baltimore Charter School. In my never ending quest to close and rebuild new city schools I have a plan for the site that the school(s) sit on. The current engulfs part of the block of Saratoga, Schroder, Carolton, and Lexington Streets. The current building would be torn and rebuilt to house additional school populations. In additional to James McHenry and the Southwest Baltimore Charter School, Lockerman Bundy and Franklin Square Elementaries resulting in their closures. The new school would be renamrd Poppleton Elementary/Middle and house grades PreK-8. In my other never ending quest to keep density high the new shcool would have underground parking and its playing fields on the roof. Back to housing since much of the housing has been demolished the only choice would be to build new. New housing would consist of town homes that are two to three stories maybe with an apartment or condo underneath to keep density high. Housing would be built to attract a diverse array of buyers and renters some of which will be working in the new Biotech park. 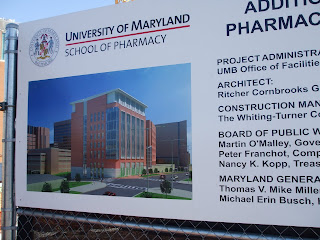