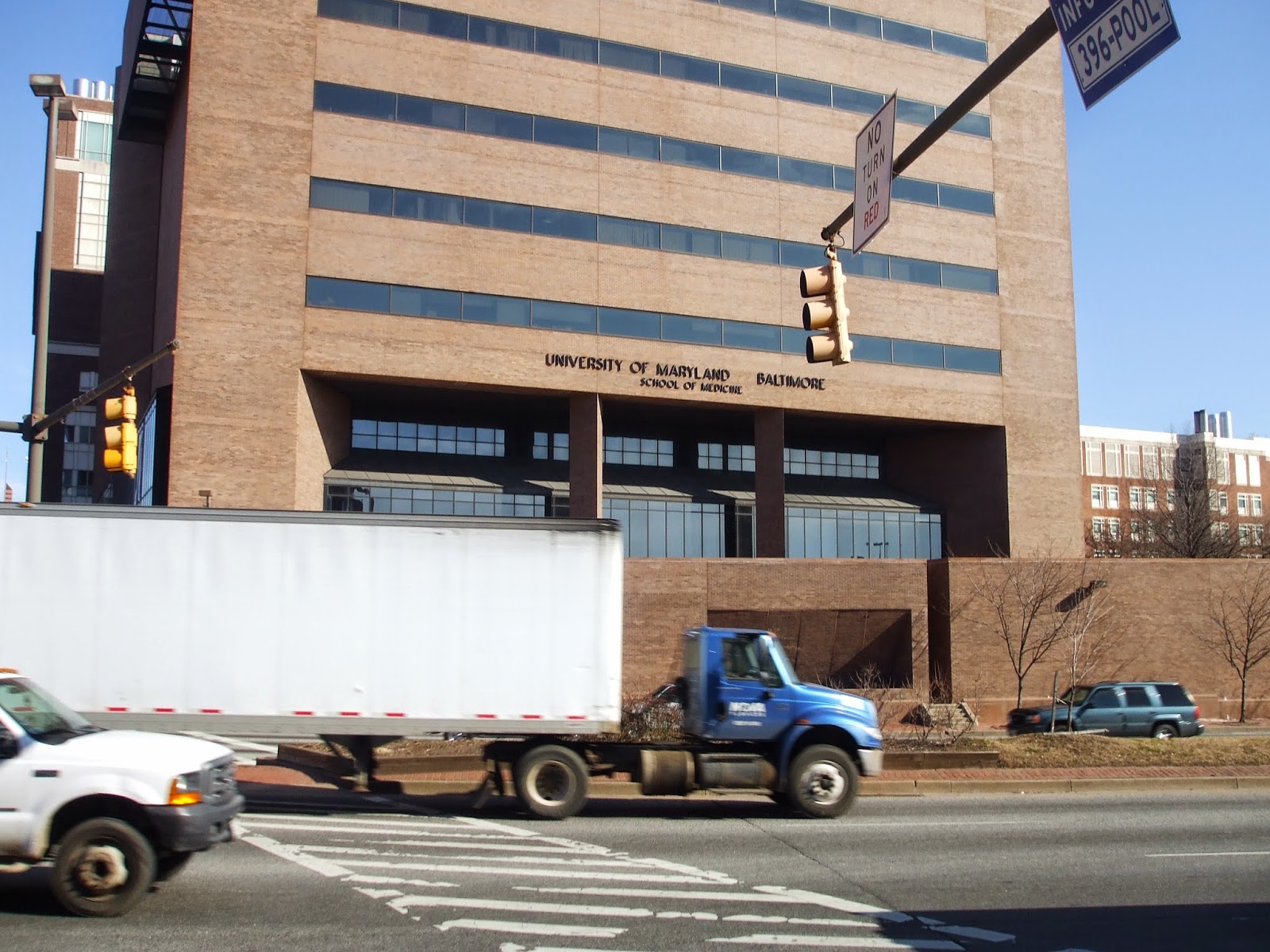 In addition to being a City of 622,000 Residents, Baltimore is also what I call a College Town. Granted a College or University isn't all Baltimore has to offer like a traditional College Town ie Salsbury, Frostburg, etc. However Baltimore is home to numerous Colleges and Universities and that particular attribute of the City is not lost on me. Therefore, I have decided to end my series on walkability by purposing a new line on the Charm City Circulator that connects a good number of the City Colleges and plenty of other landmarks along the way not only to each other, but to Downtown, other circulator lines, as well as both the Light Rail and Metro and eventually the Red Line, Yellow Line, and Charles St. Trolley once they're built. So without further ado, I give you a more walkable College Town. 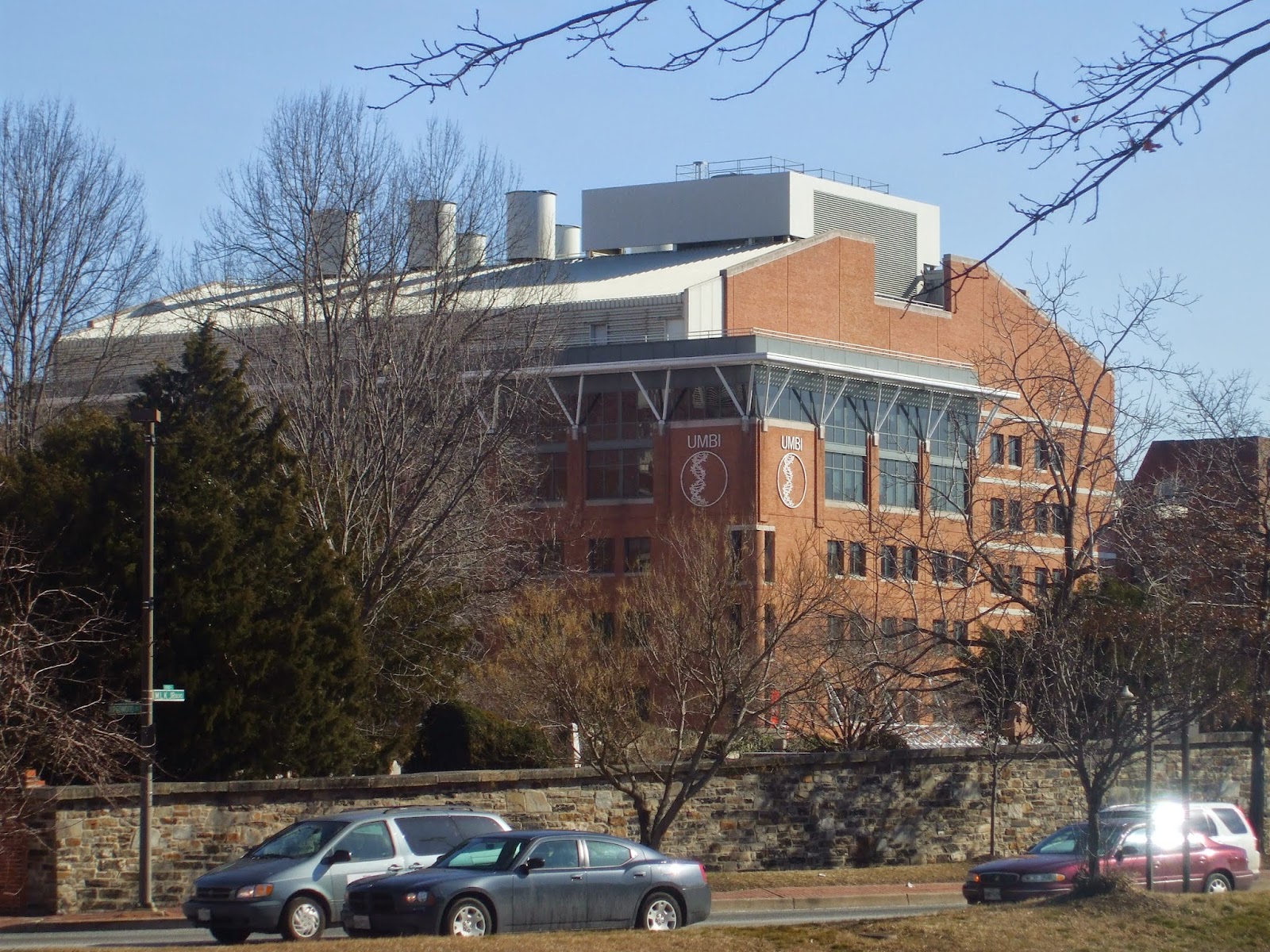 As I have done in previous posts regarding additional Charm City Circulator Lines, I have started their route Downtown. This time the "College Route" as I have named it, will start at Paca St. and Lombard St. Here it will connect to the Orange Line of the Circulator which runs from Hollins Market to Inner Harbor East. Paca and Lombard  is also the stop to be used for University of Maryland Baltimore, University of Maryland Medical Center, Camden Yards, M&T Bank Stadium, and the Horseshoe Casino. 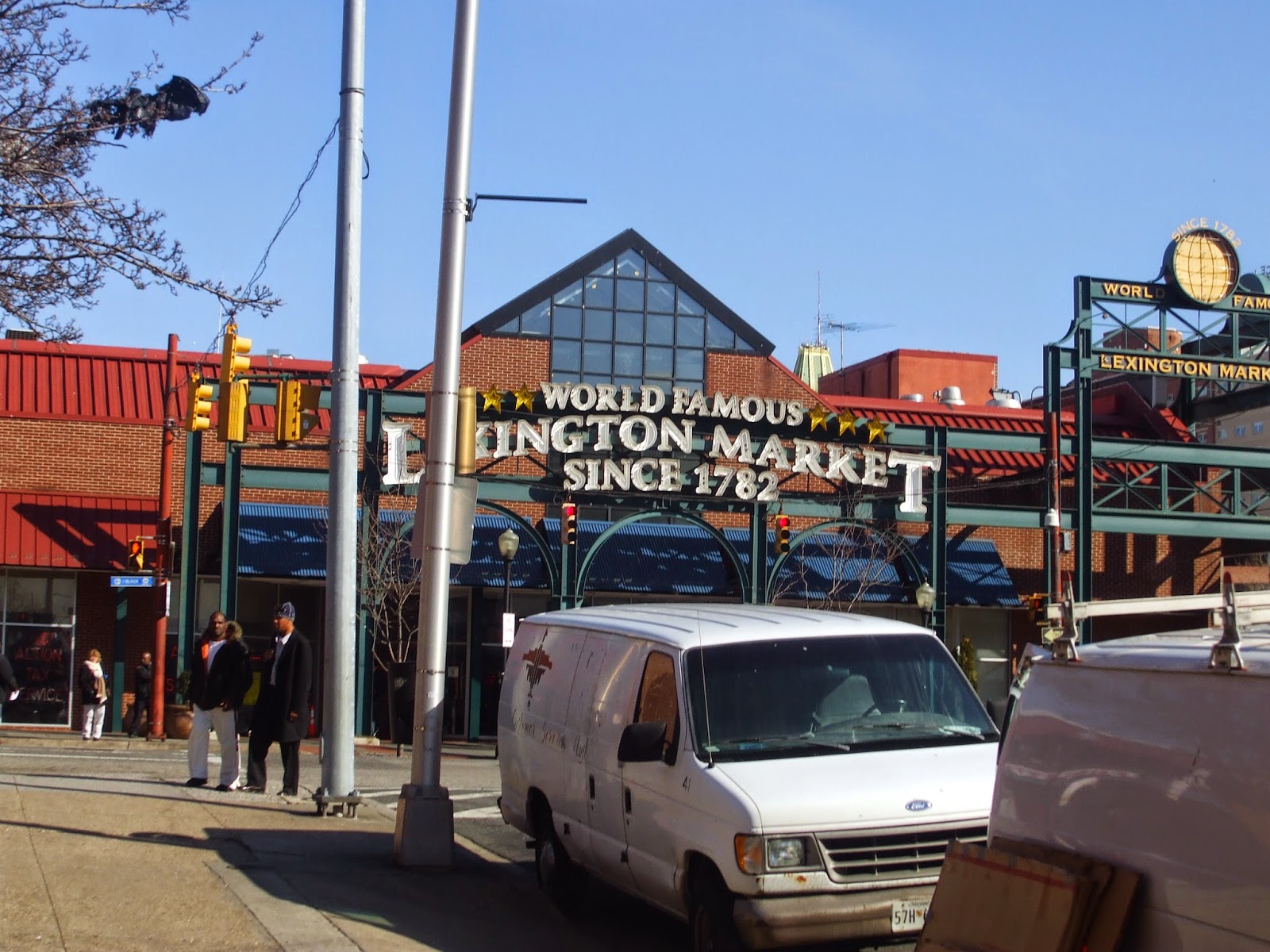 Traveling up Paca St. the Circulator will then stop at Lexington Market which is set to receive Millions in renovation dollars. This stop will also be a quick walk to both the Metro and the Light Rail. Heading up Paca St. the line will stop at St. Mary's Park in Baltimore's Historic Seton Hill Neighborhood. Rather than continue to where Paca St. becomes McColloh St., it will turn up Madison St. and make a left on Howard St. for a stop at Univeristy of Maryland Midtown Medical Center (nee Maryland General Hospital.) When the Circulator is following Howard St. it will use the same stops that the Light Rail has (Cultural Center and Mount Royal) for easy transfers. 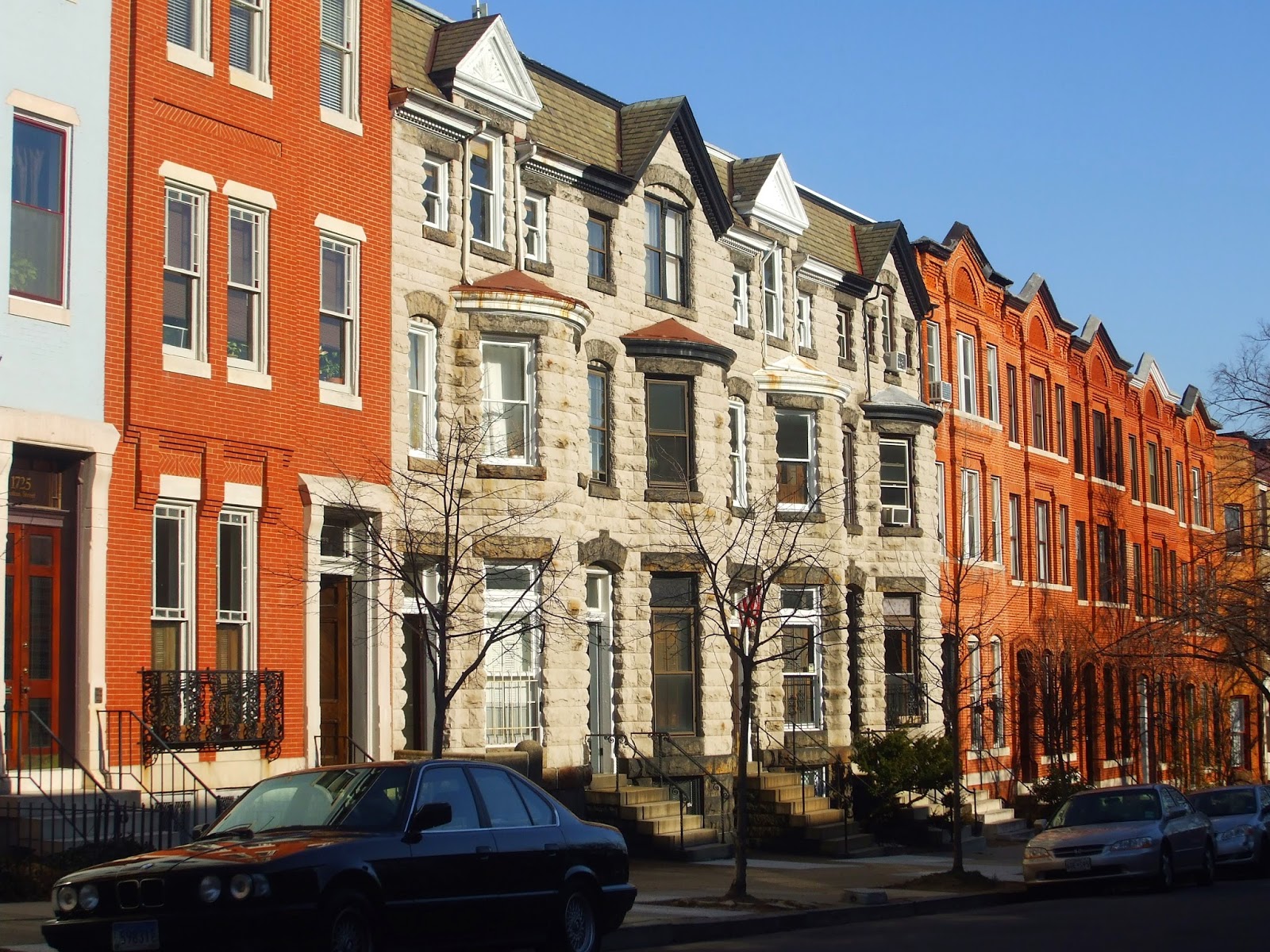 At Mount Royal Avenue the line will turn left for a stop at East Bolton Hill/MICA. Since Mount Royal Avenue stops at North Avenue, it will turn left and follow North Avenue until it stops at Eutaw Place for a North Bolton Hill/ Reservoir Hill Stop. It will continue northbound up Eutaw Place for Reservoir Hill which is quickly becoming Baltimore's next up and comer. Like I have said in the past, a component of walkability is how welcoming your environment is. With a stop along this new Charm City Circulator Line, I think this will improve Reservoir Hill's walkability not only by offering connectibility but I believe it will lead to further enhancements that will continue to improve the welcoming environment that is Reservoir Hill. 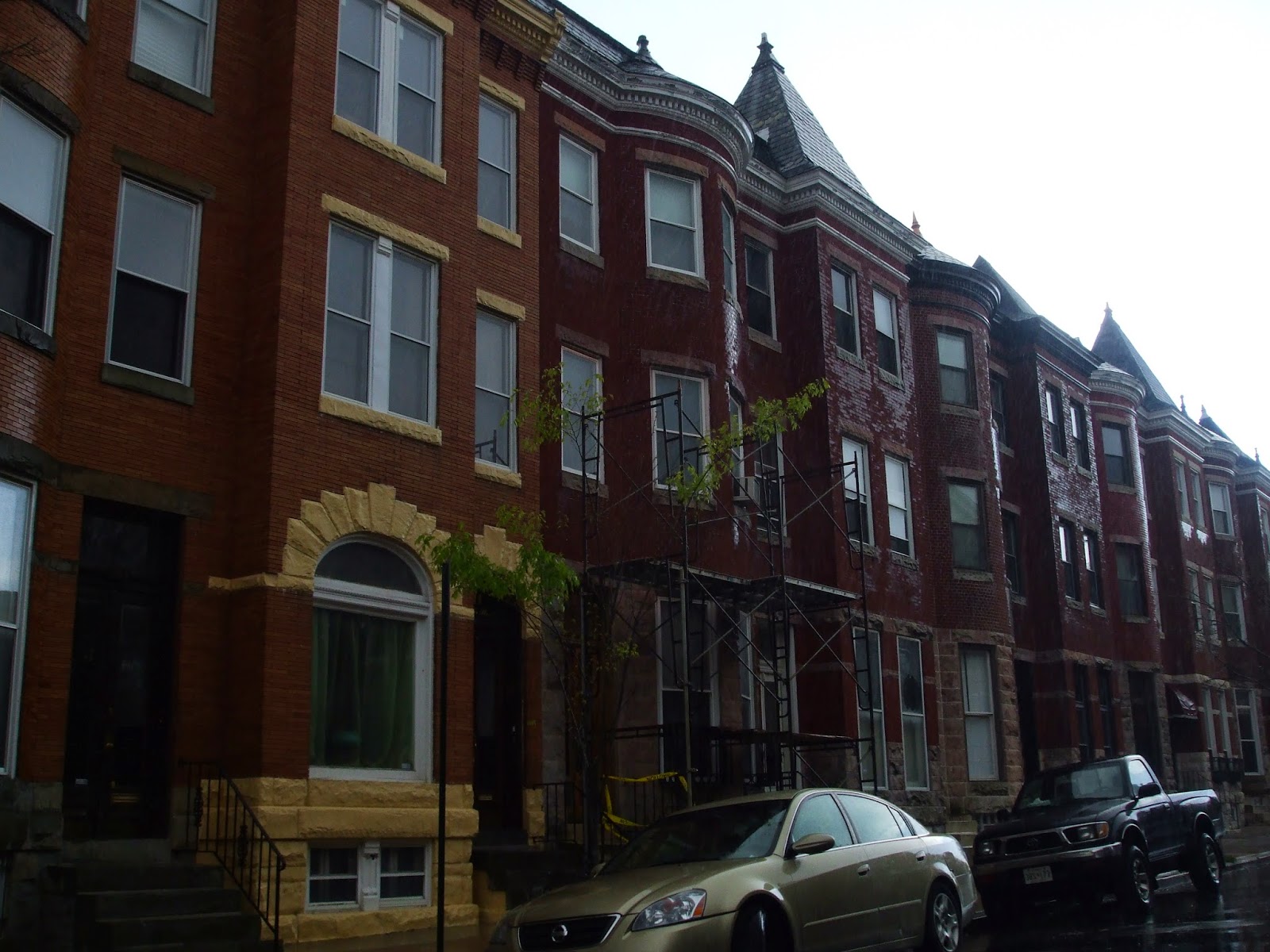 Eutaw Place ends at Druid Park Lake Drive at which point there will be a stop for Druid Hill Park. This will also serve the northern portion of Reservoir Hill. The circualtor will then cross over the JFX where Druid Park Lake Drive becomes W. 28th St. in the heart of Remington. Remington, like Reservoir Hill, is an up & comer and is experiencing a rebirth with several promising development plans in the pipeline. It is here that I ask the Hampden-Woodberry Shuttle Bug to extend itself to connect to the College Route of the Charm City Circulator by including a new stop at 28th and Sisson St. 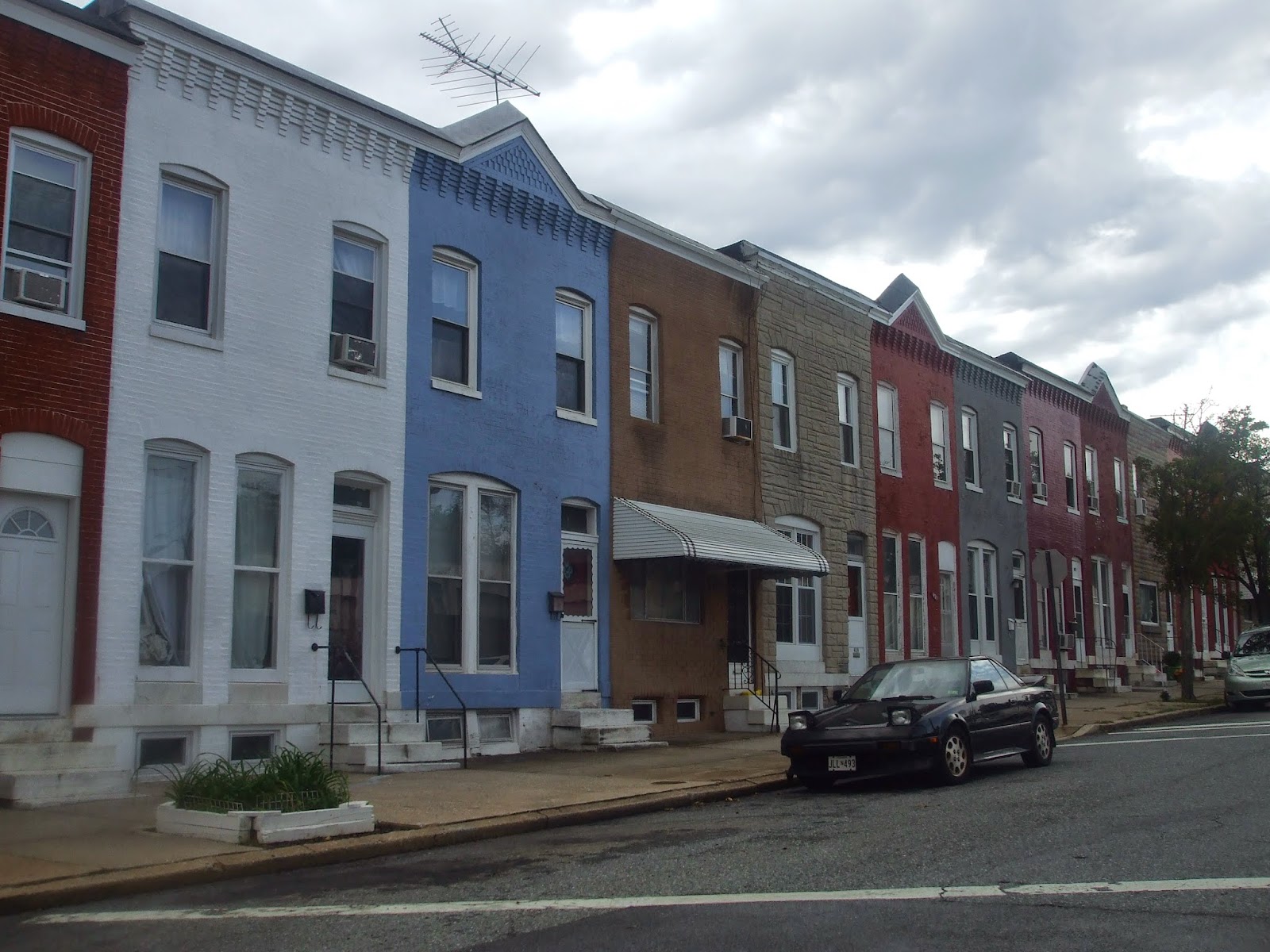 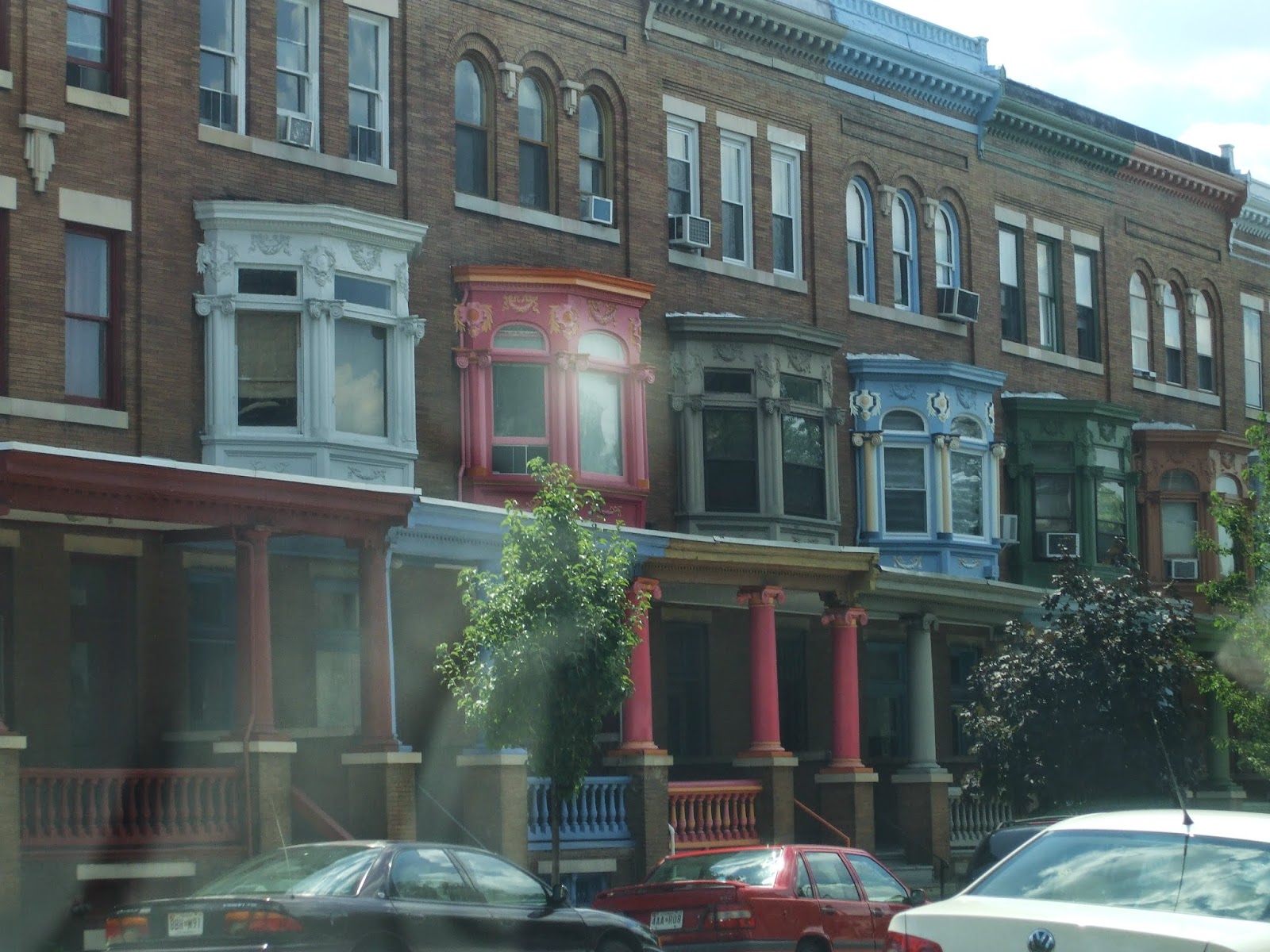 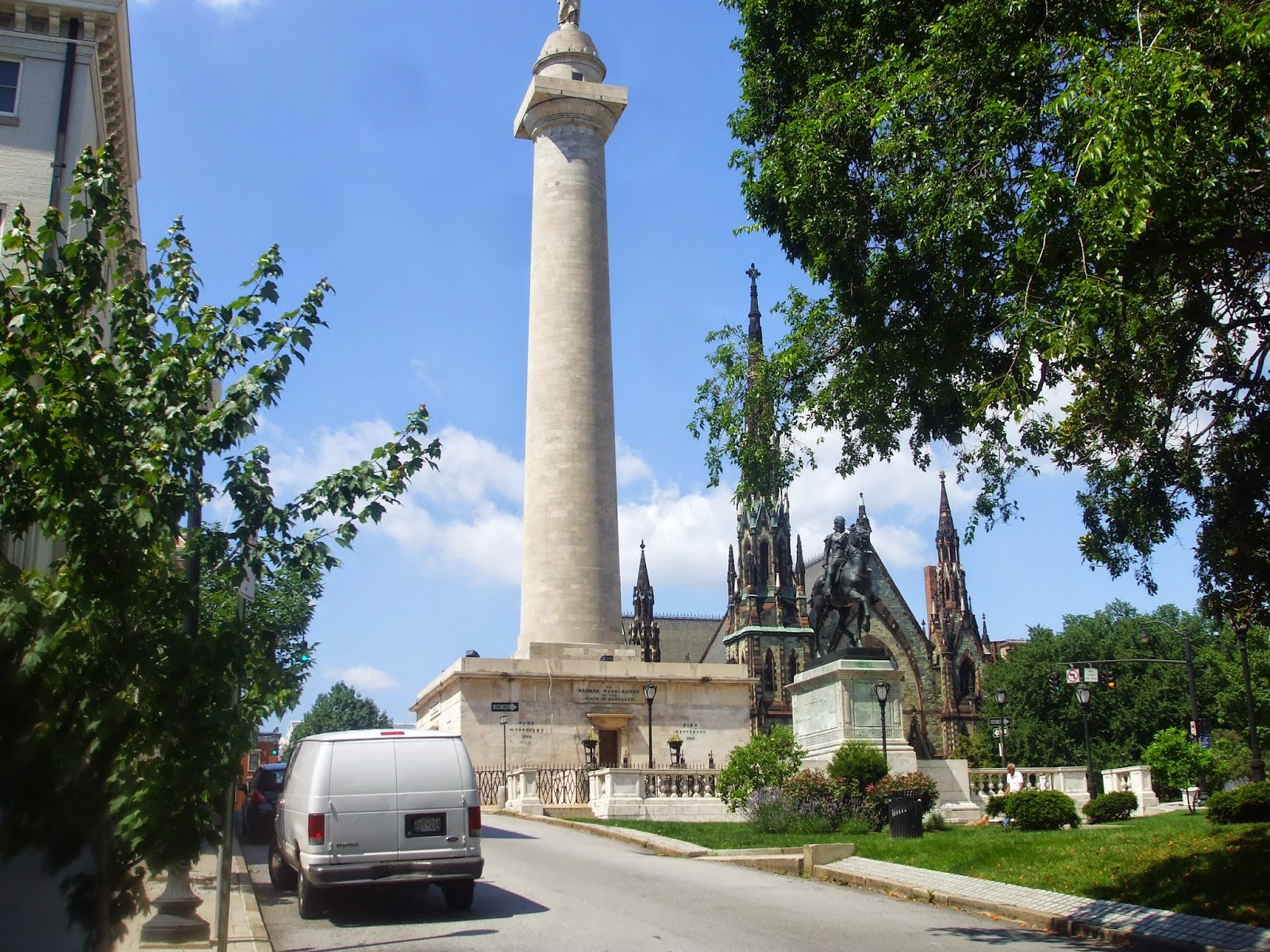 It will continue to follow Maryland Avenue where it will have a University of Baltimore Stop (different from University of Maryland Baltimore) whose stop will also include the Lyric Opera House and the Fitzgerald Apartments. The line will follow Maryland Avenue until it blends with Cathedral St. for a stop at the Washington Monument in the heart of Mount Vernon also serving the Walters Art Museum. Continuing down Cathedral St. there will be stops at the derelict Lexington Mall which would also serve Charles Center and the ill-fated Super-block. 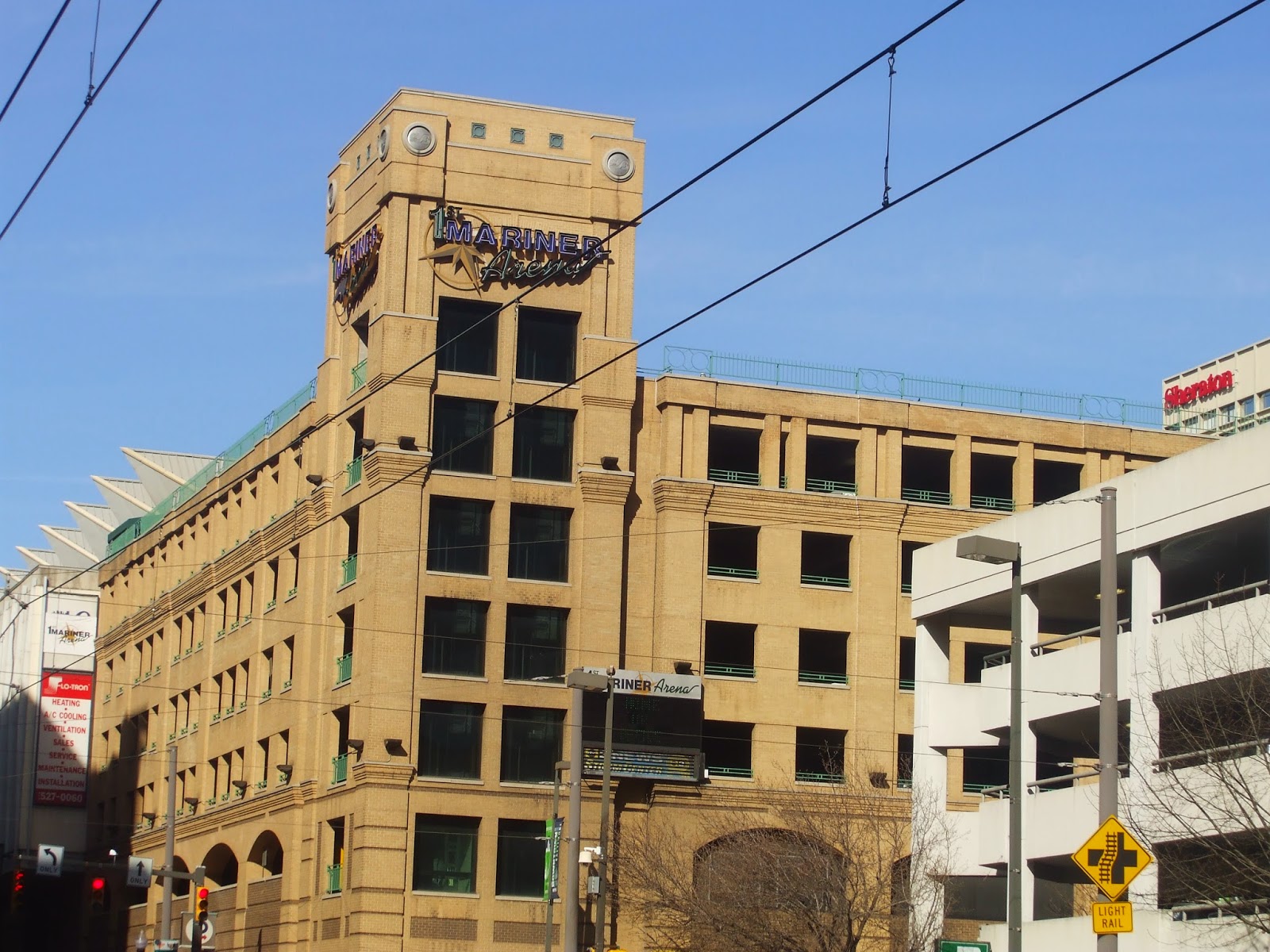 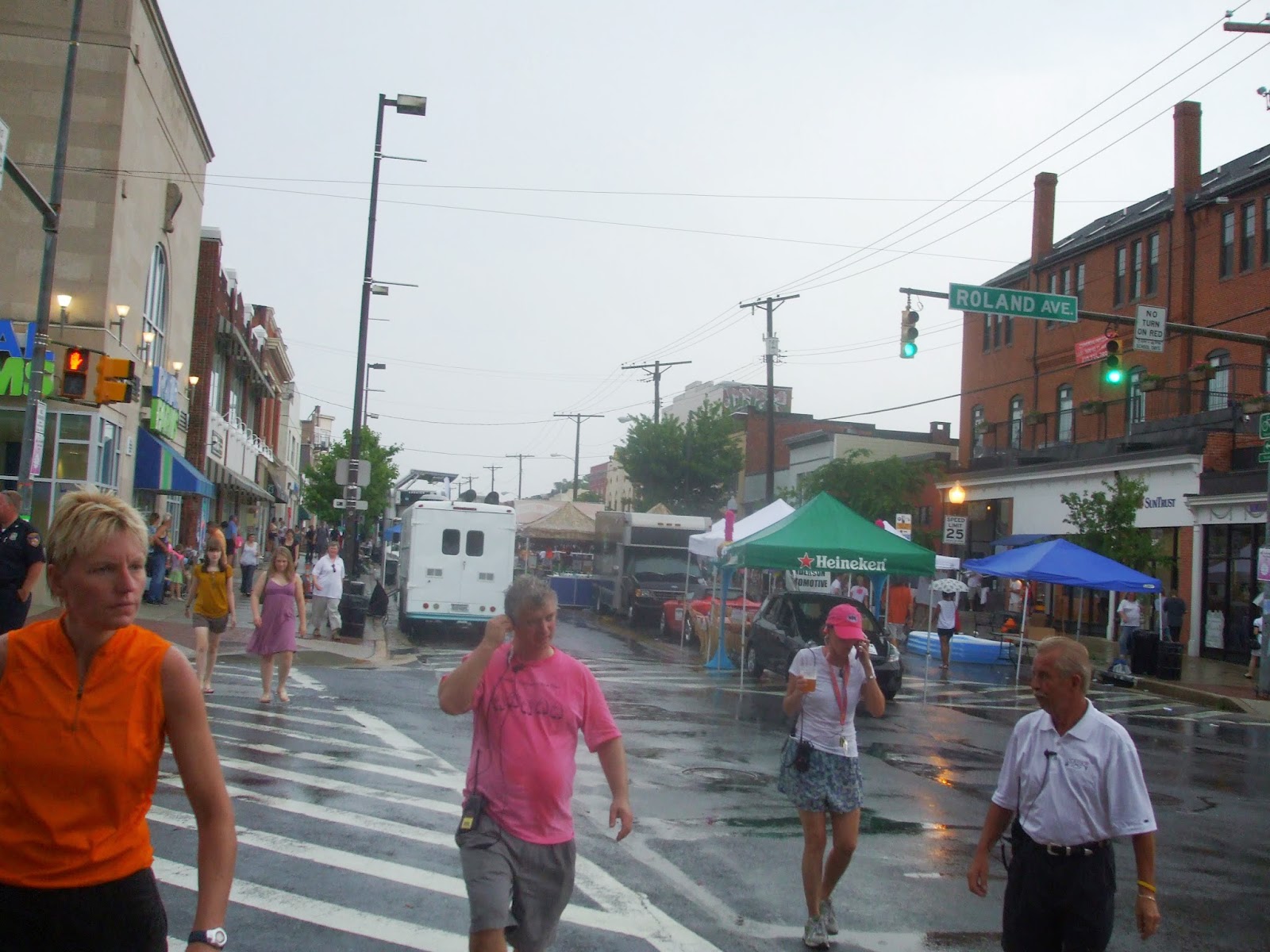 As my series on walkability comes to a close, I would like to remind you that I've only scratched the surface on walkability. There are several more areas throughout the City where walkability can be improved upon. However, given how long that would take I decided on targeting areas that would benefit from the action plans that I have proposed. 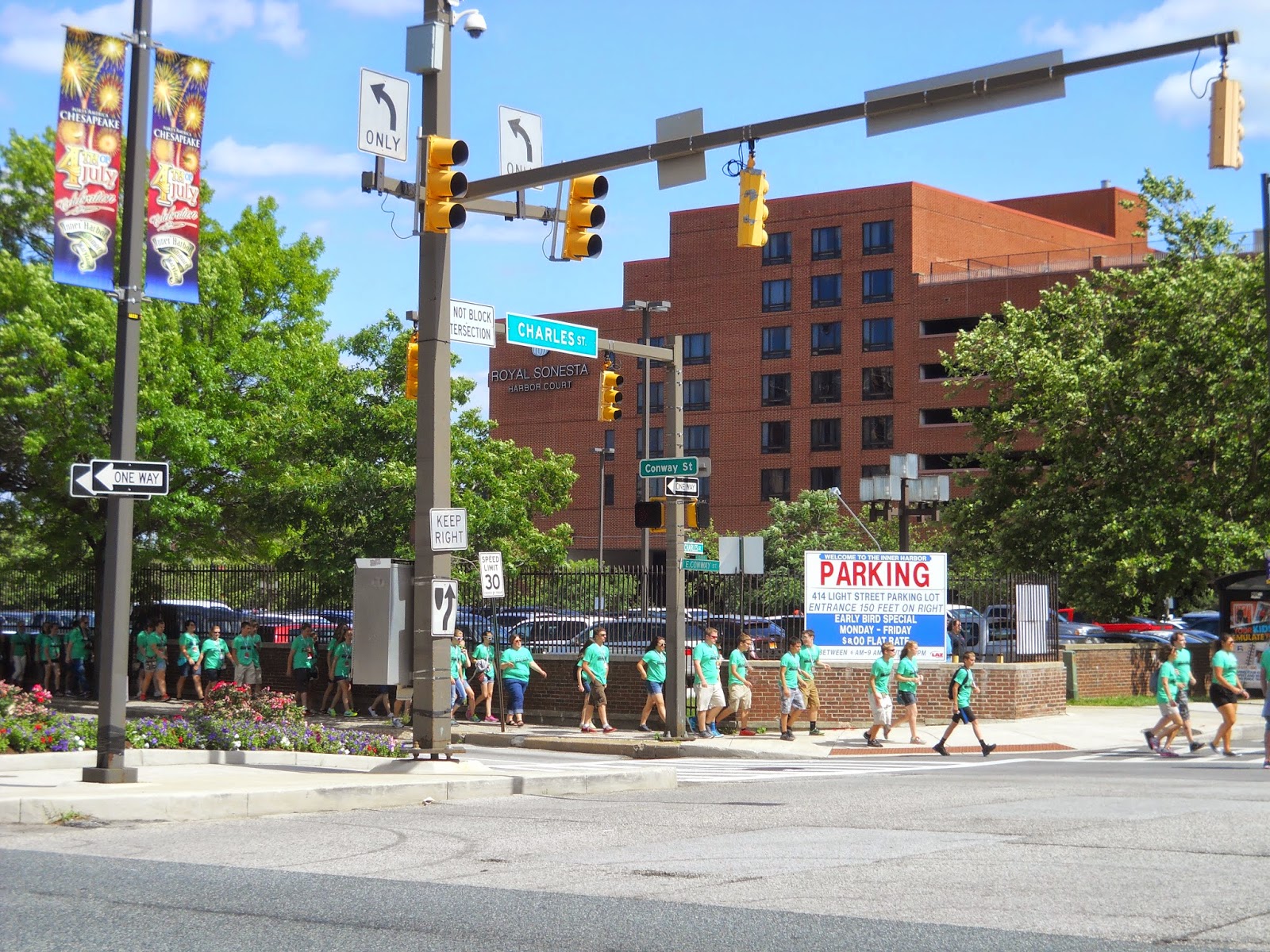 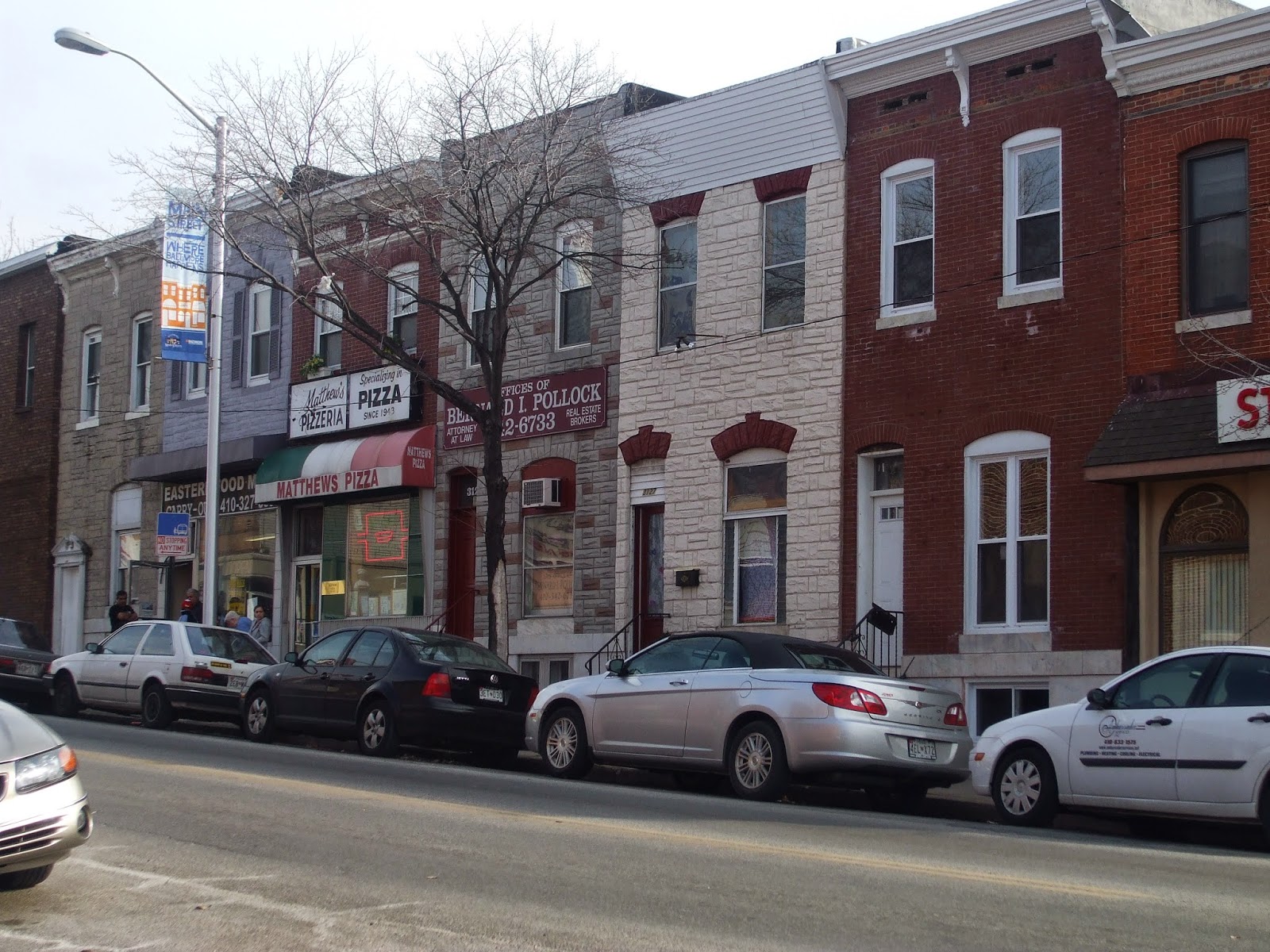 As I continue my series on walkability in Baltimore, my focus turn to southeast Baltimore. No I'm not talking about the already walkable Neighborhoods of Inner Harbor East, Fells Point, and Little Italy. I'm, talking about Neighborhoods further into southeast Baltimore such as Canton, Highlandtown, Greektown, O'Donnell Heights, Brewers Hill and Patterson Park. Sure these Neighborhoods have sidewalks but walkability isn't all about sidewalks. How accessible is it to transit lines be they the Charm City Calculator or Rail Transit? This is what I will address in part of my walkability series. 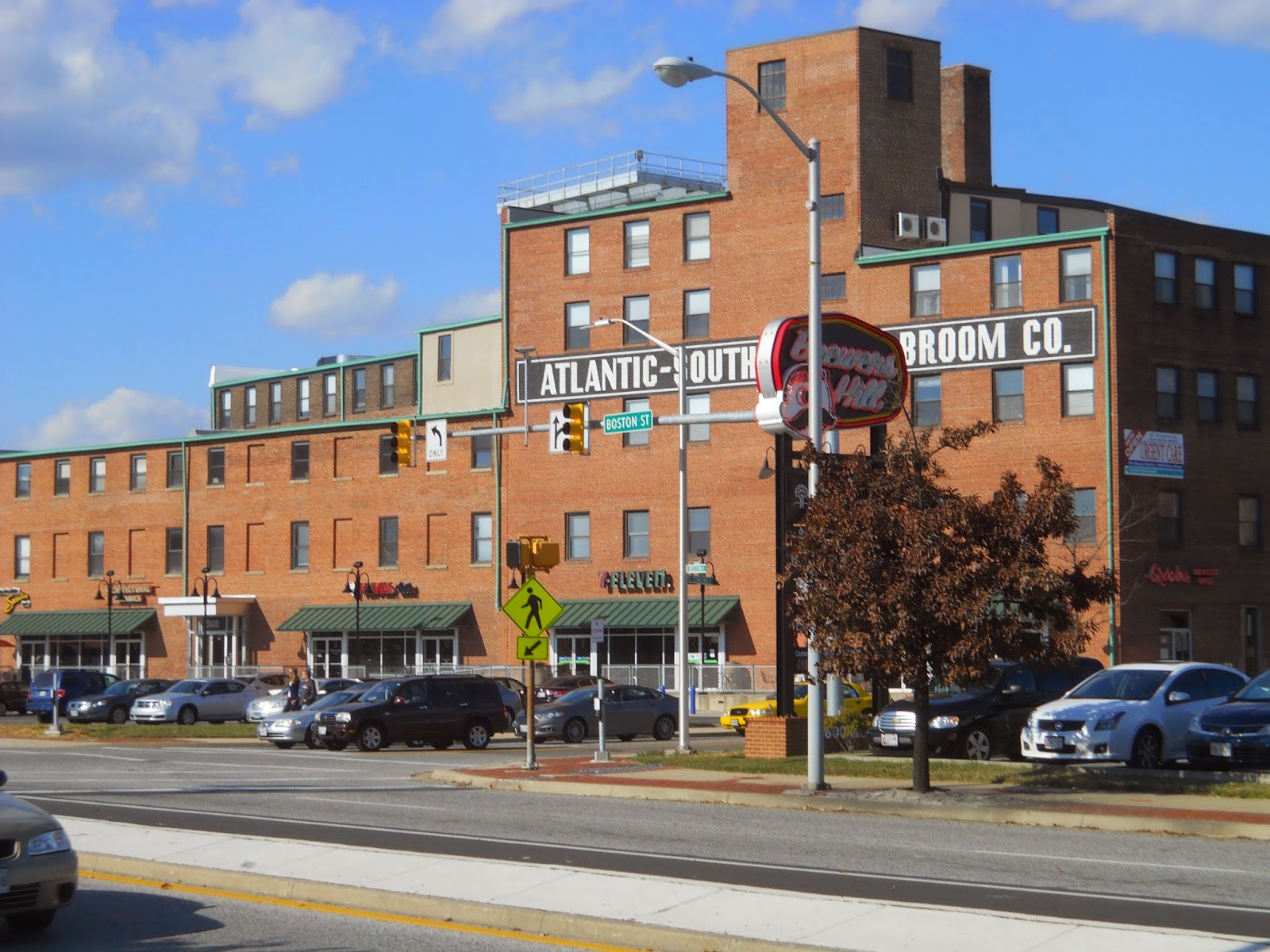 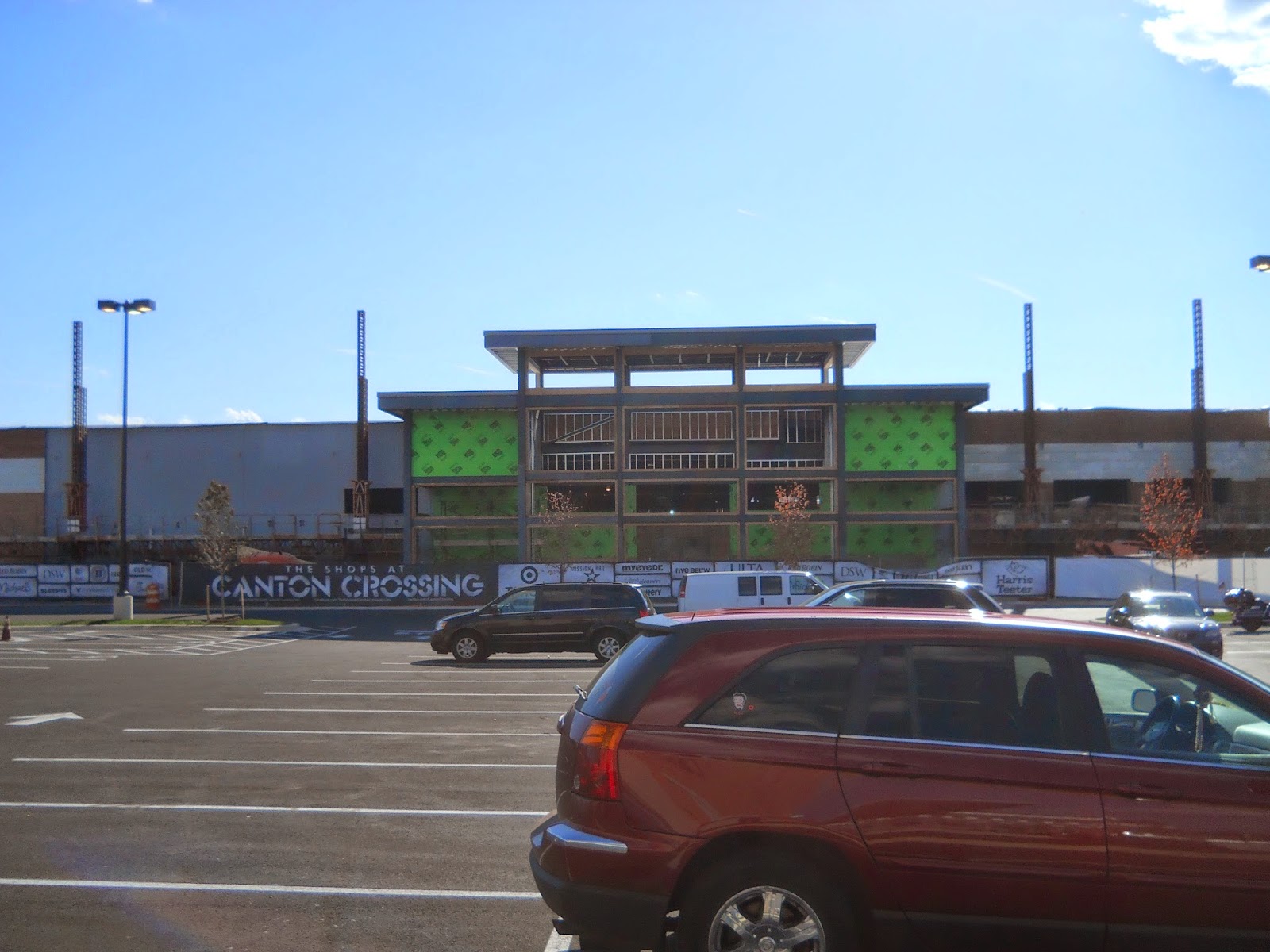 With or without the Red Line, Southeast Baltimore needs representation on the Charm City Circulator. The Charm City Circulator is a free series of buses that connects to Baltimore's showcases, attractions, and institutions. The lines circulate from Downtown and branch out into Neighborhoods such as Fells Point, Locust Point, South Baltimore, Federal Hill, Mount Vernon, Station North, Little Italy, Inner Harbor East, Johns Hopkins Hospital, and University of Maryland Biotech Park among others. 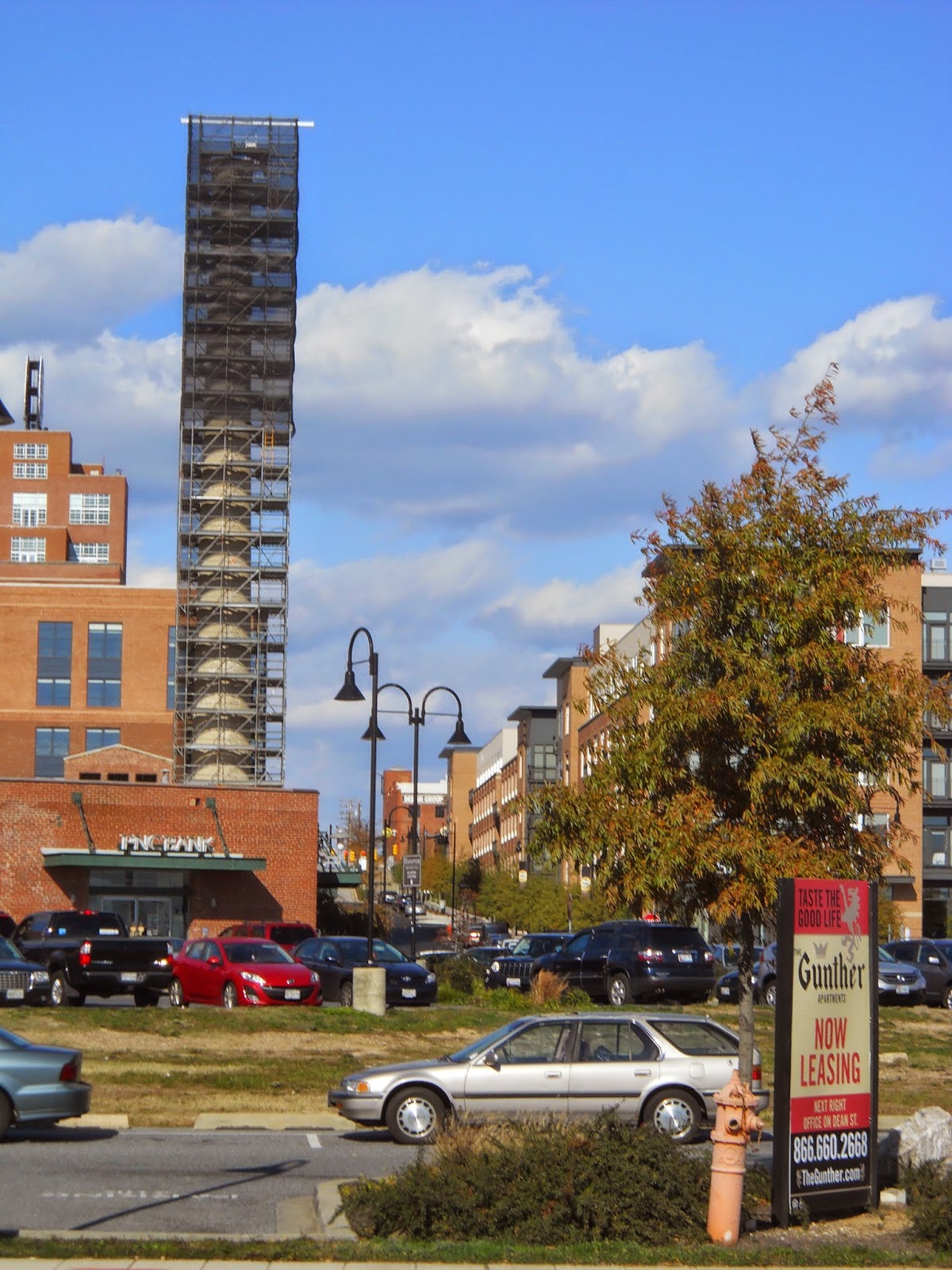 Southeast Baltimore is undergoing something of a building boom. Canton Crossing has given Baltimore its first true Big Box Shopping Center with suburban style tenants. Brewers Hill is also seeing hundreds of new Apartments going up where vacant and blighted industrial buildings once stood. Greektown is seeing town homes going up where its vacant and industrial buildings once stood. O'Donnell Heights has been torn down and is seeing redevelopment as a mixed income Community. Highlandtown, although there's not much in the way of new construction is being rediscovered after decades of disinvestment and population loss. 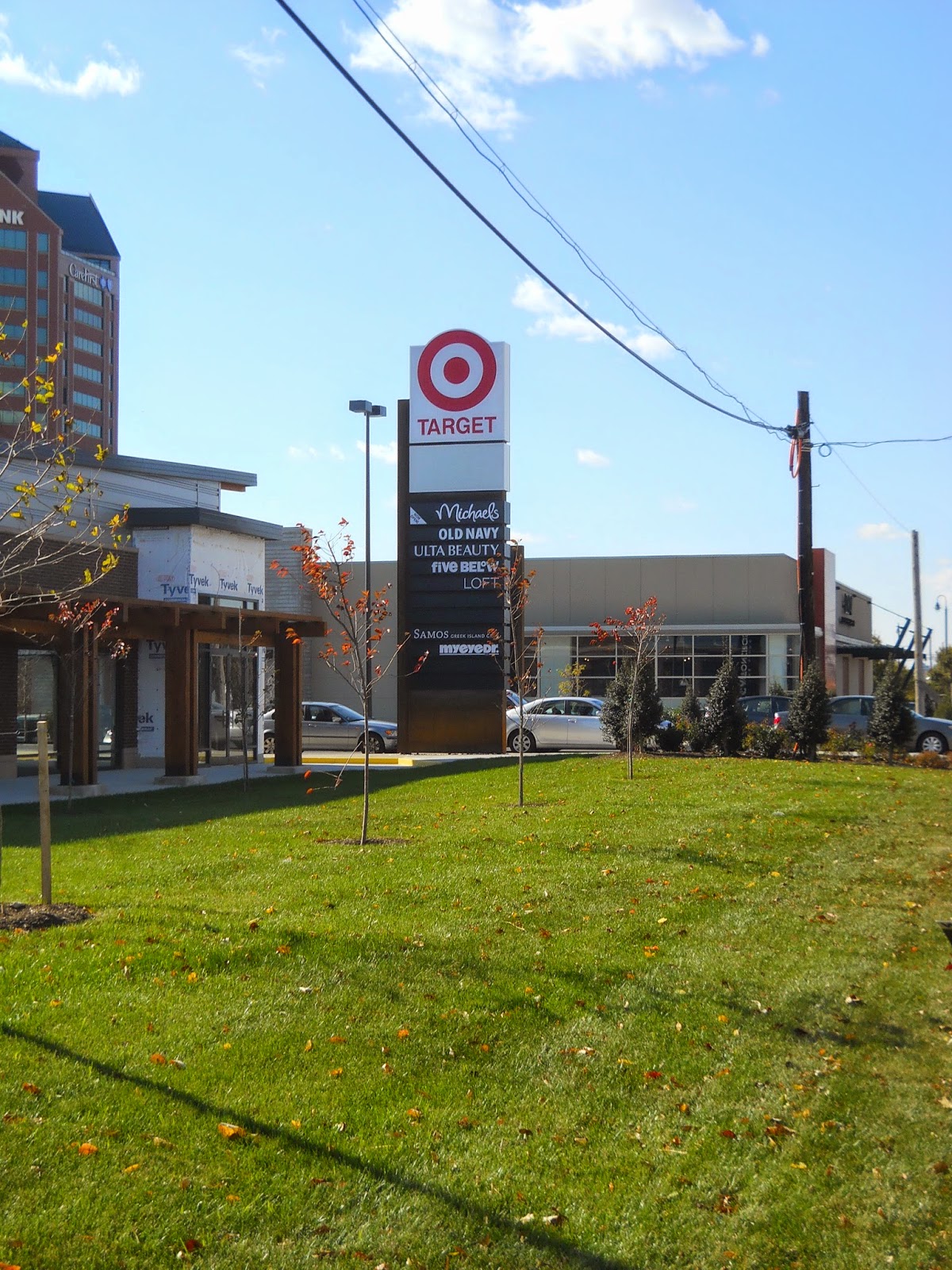 The only way to increase walkability at this stage in the game for Southeast Baltimore would be a new line on the Charm City Circulator. This new route named the "Silver Line" would at first overlap other lines mainly so that riders may transfer. It would start at Howard and Pratt St. for a connection to the Light Rail, and just like the Orange and Green Lines would head down into Southeast Baltimore via President St. While the Orange Line stops short at Fells Point and the Green Lines turns north to Johns Hopkins Hospital, the Silver Line would continue Southeast to Boston St. in the heart of Canton. 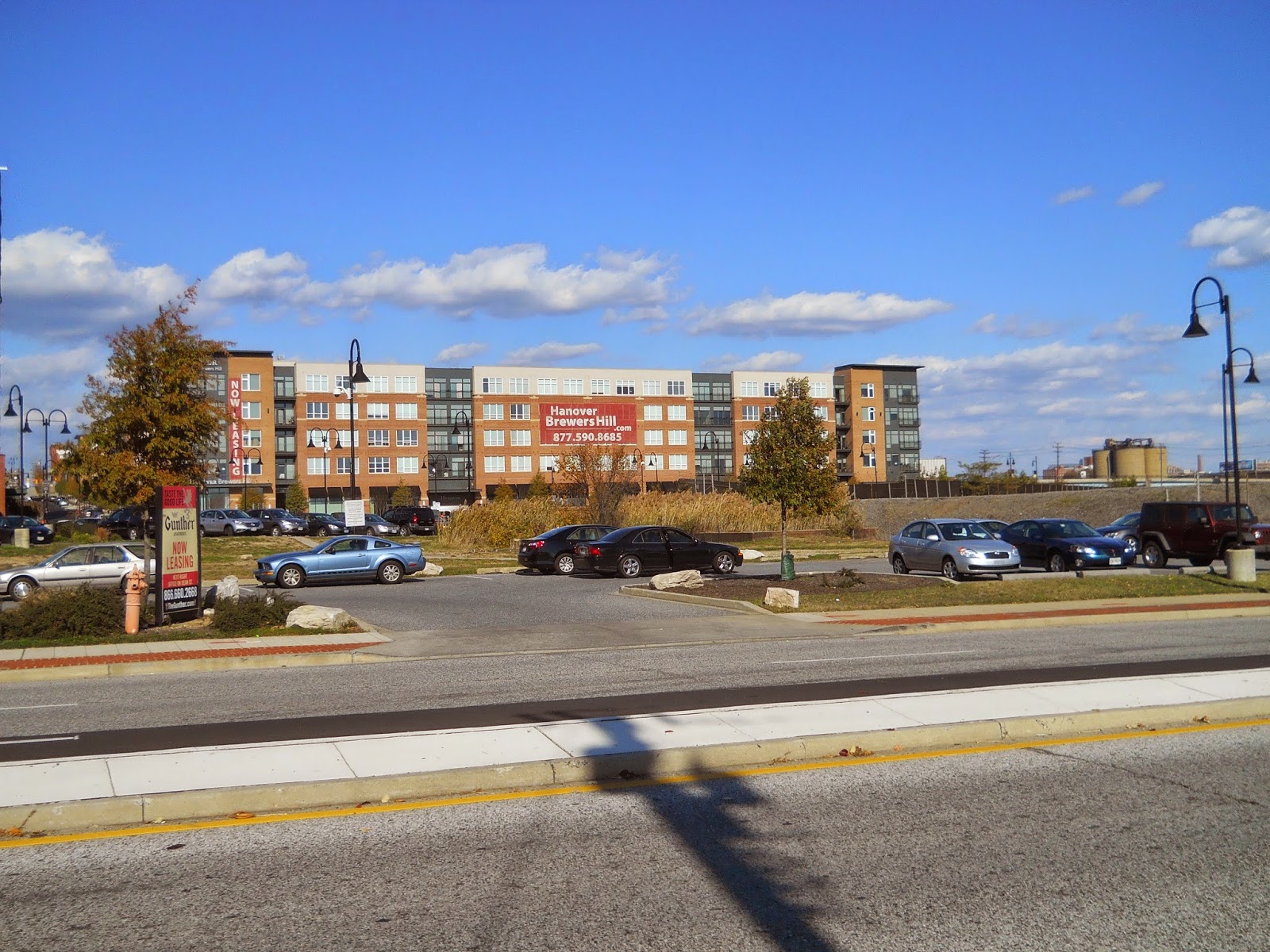 Once in Canton, the Silver Line will follow Boston St. with stops at predictable places such as the Safeway, Canton Crossing, and the Canton Waterfront Park. Crossing into Brewers Hill, the Silver Line will continue along Boston St. picking up Residents in all of the new Apartments from the building boom(pictured above). Continuing still down Boston St. past the Baltimore Travel Plaza (of which  there will be a stop) the Silver Line will reach its eastern "terminus" at Gusryan St. A future stop at the proposed Amazon Distribution Center can be master planned in as well. 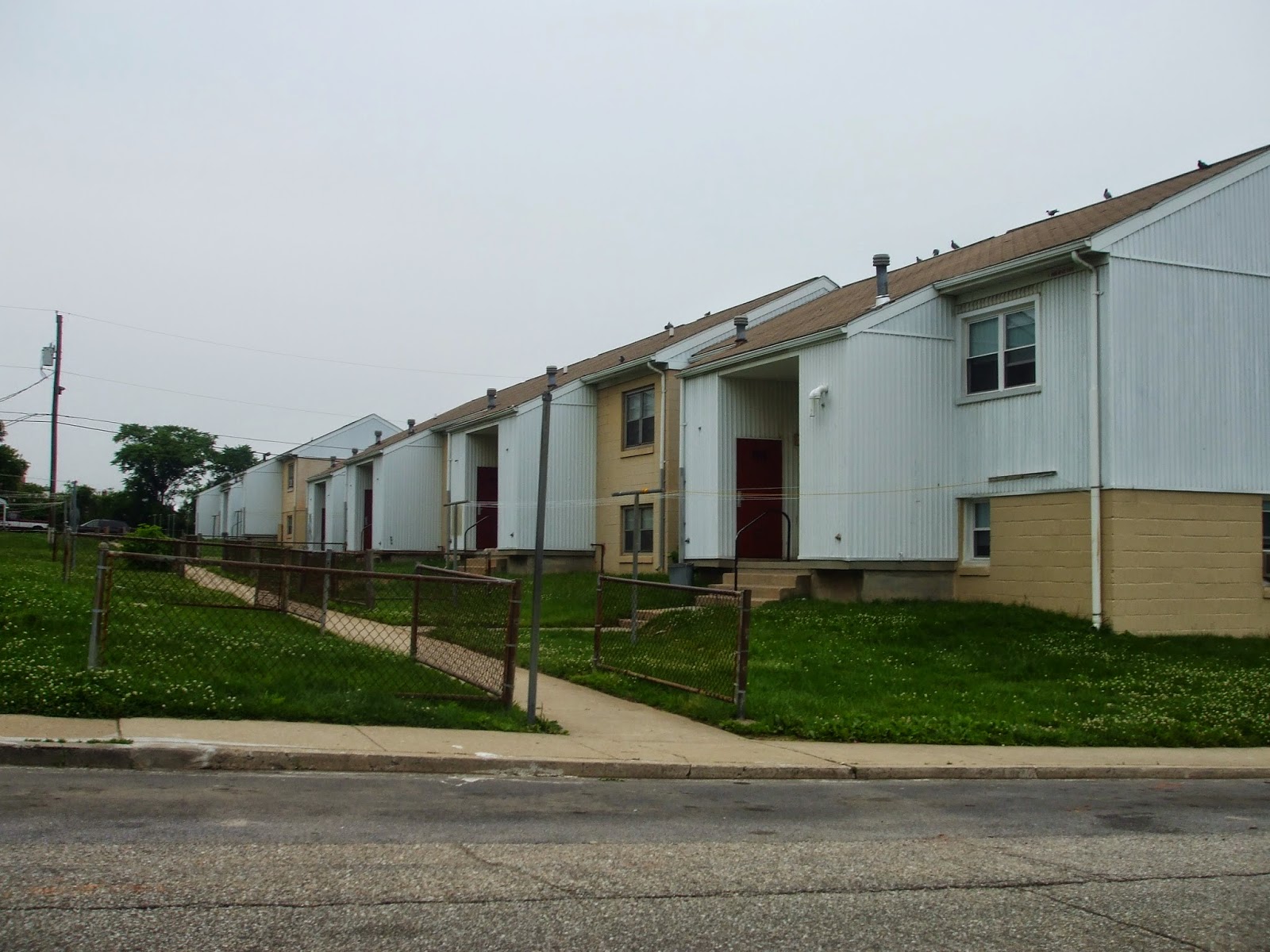 Gusryan St. runs through O'Donnell Heights(pictured above), a public housing development currently being torn down and redeveloped as a mixed income Community. Surely a selling point to lure new Residents in and welcome old Residents back would be a stop on the Charm City Circulator's Silver Line. The Silver Line will then continue north before turning westerly onto Eastern Avenue. 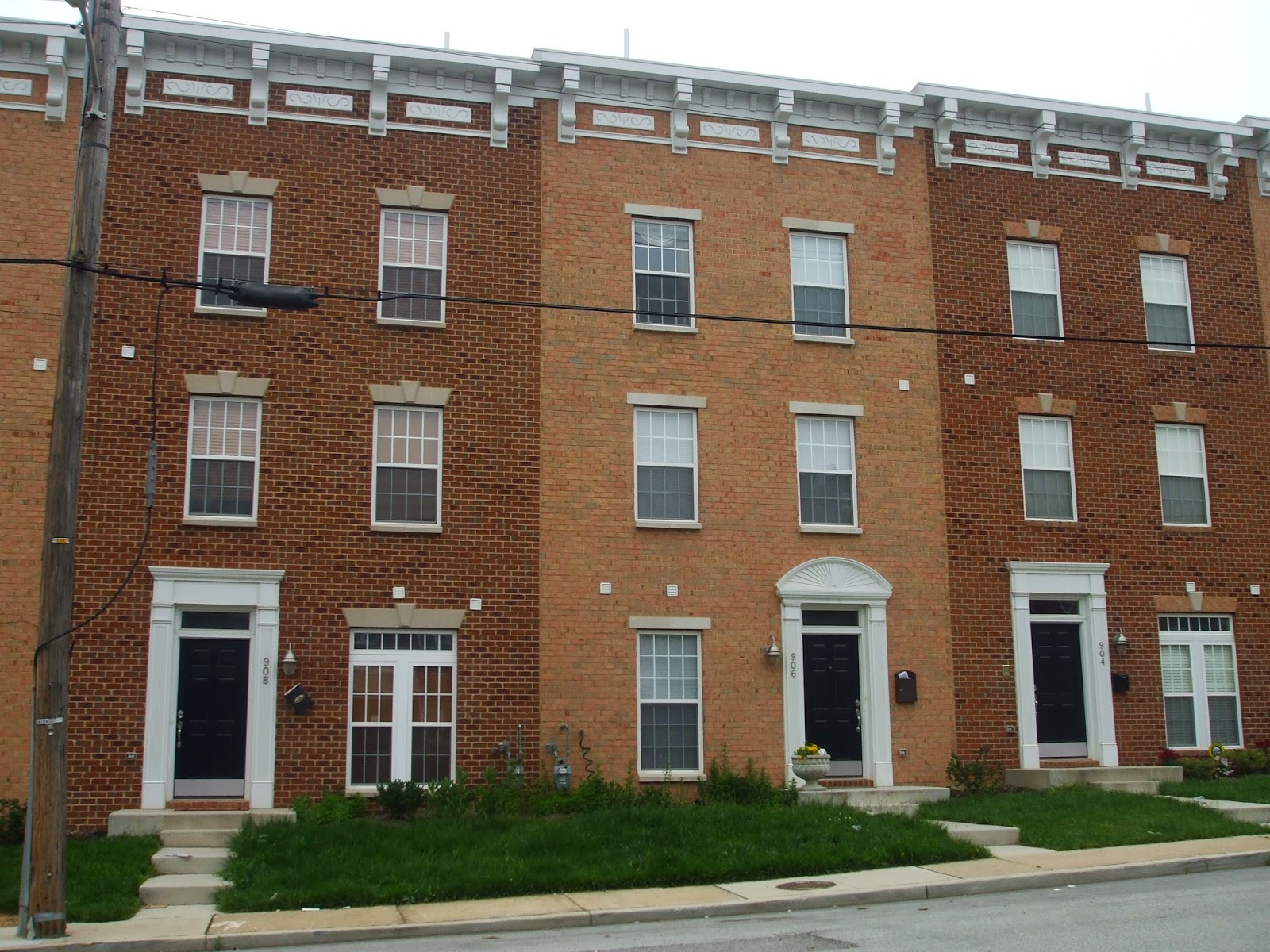 Along Eastern Avenue will be a stop at Hopkins Bayview Medical Campus on its way to Greektown. Greektown, like Brewers Hill is also in the middle of a building boom. The Silver Line will turn down Oldham St. which ground zero for new construction in Greektown. Town Home Developments like O'Donnell Square and Athena Square (pictured above) where blighted industrial buildings once stood are selling like Hot Cakes. The Silver Line will then turn onto O'Donnell St. for a few blocks before turning up Haven St. 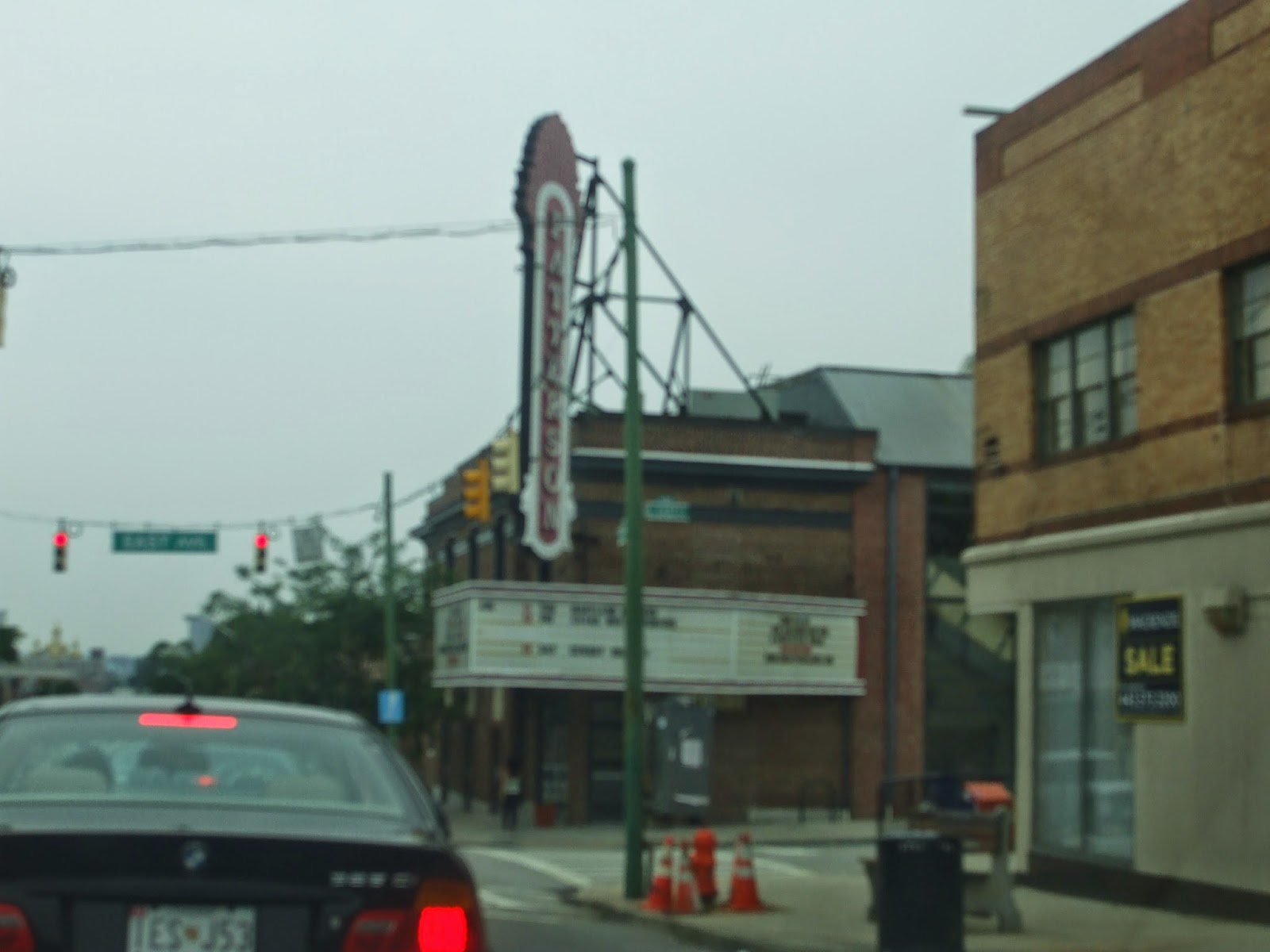 Once on Haven St. the Silver Line will make another left turn onto Eastern Avenue. It is here that the northern part of Canton will have access to the Silver Line as well as the Communities of Highlandtown and Patterson Park with such attractions as the Patterson Theater and the Southeastern Branch of the Enoch Pratt Free Library. West of Patterson Park the Silver Line will begin to overlap the Green and Orange Lines as it makes its way back Downtown. It will pick up Baltimore St. in Charles Center via President St. for a transfer to the Metro while ending its circulating route back at Howard St. 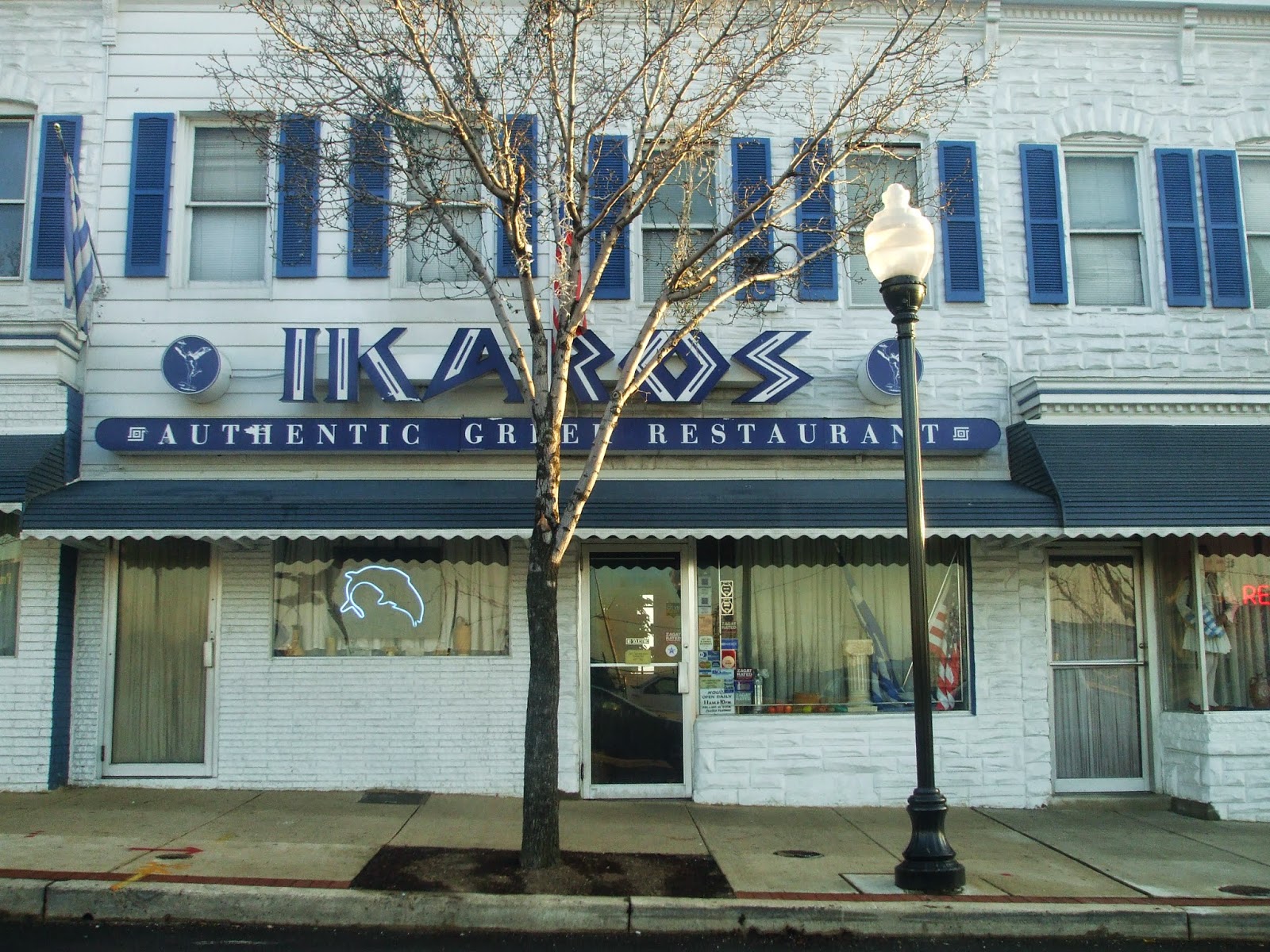 In all fairness Southeast Baltimore is quite walkable with its plethora of sidewalks and narrow street grid with a dense population. However there's always room for improvement such as a better aligned Red Line and its very own representation on the Charm City Circulator. Stay tuned for my final installment on my walkability series. 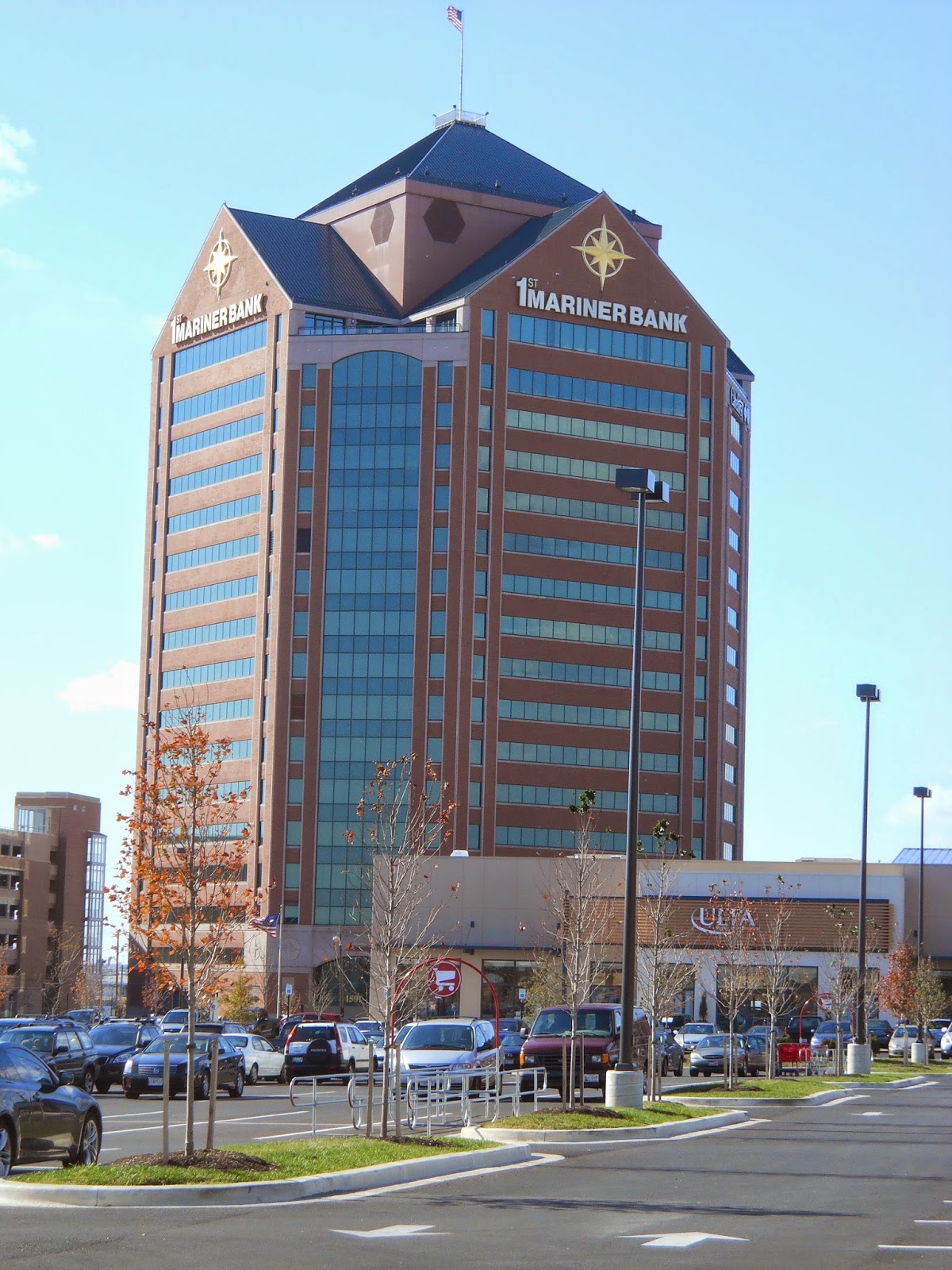 After a well deserved and restful two weeks of vacation, I'm now back home and ready to resume work on not just my series on the walkability of Baltimore but all the other ideas that have bubbling through my head that are still in the research phase. Stay tuned for the completion of the series I started and the transformation of other ideas into the posts you see on this blog.
Posted by Spence Lean at 12:02 AM No comments: