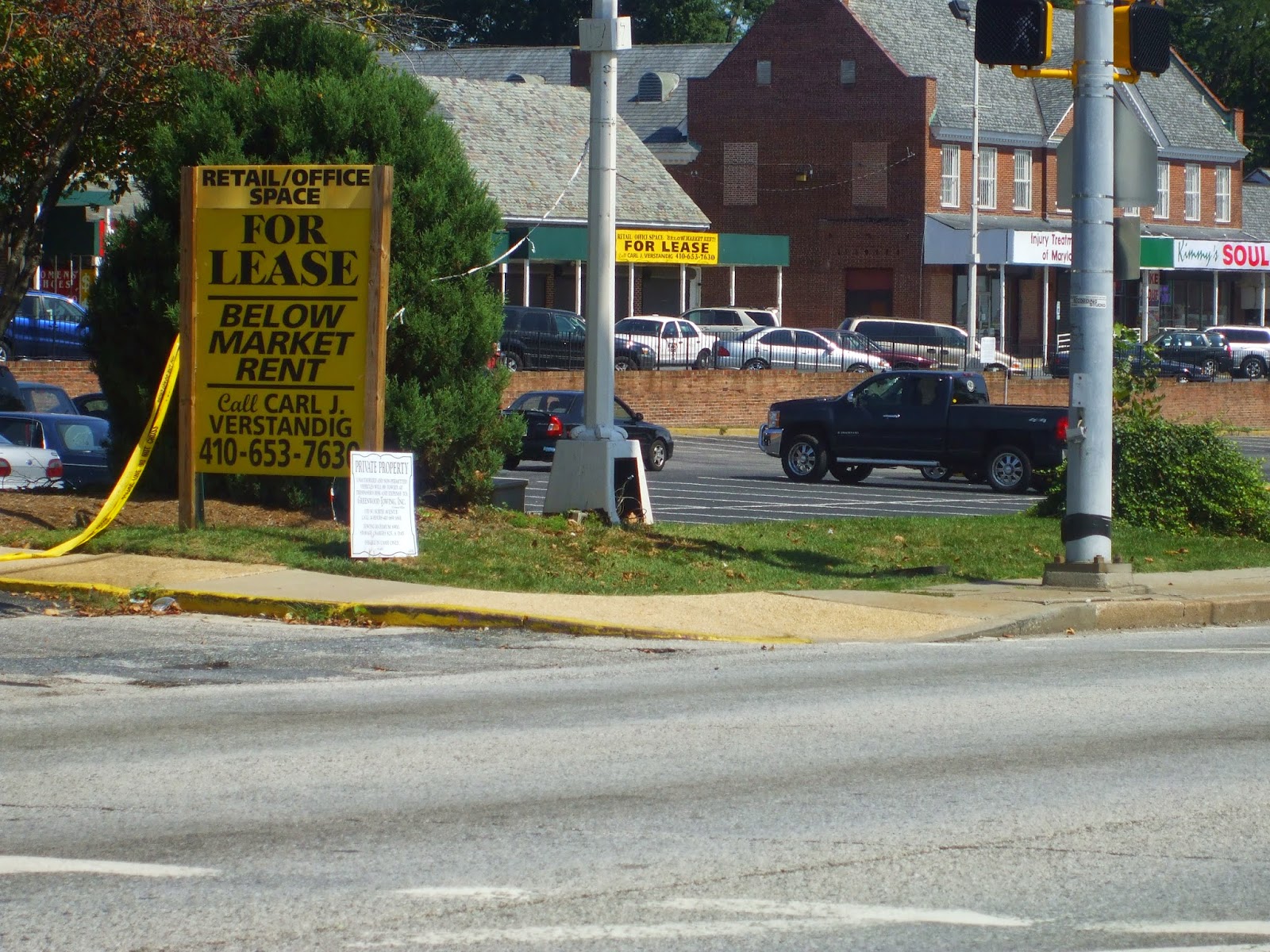 Edmondson Village Shopping Center is in shambles. There I said it. This time I don't just mean that the mix of low end tenants doesn't match the wants and needs of the Community it serves although that's part of the problem. What I mean this time is that the Center is in a state of physical decay. Gutters are falling off, bricks are crumbling, pot holes are filling parking lots, trash is strewn about everywhere, and dumpsters and trash cans remain un-emptied, and the sewage remains backed up. To put it lightly, if change doesn't come and doesn't come fast, I fear for the future of not just the Shopping Center but the Greater Edmondson Village Community as a whole. 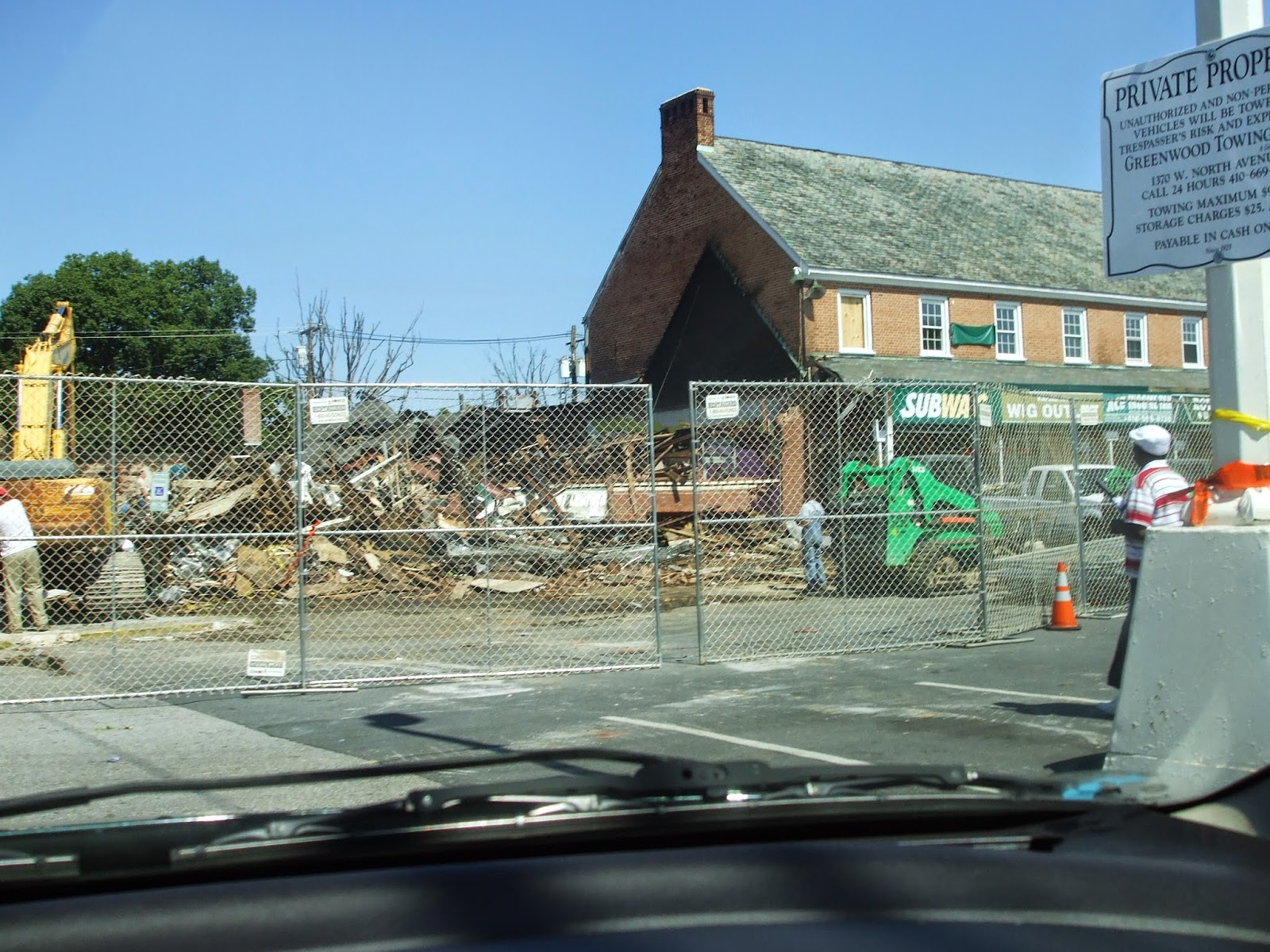 Edmondson Village wasn't always like it is today. It opened in 1947 as an upscale Shopping Center for the fast growing Edmondson Avenue corridor. It originally boasted tenants such as Hoschild Kohn, Hess Shoes, a Movie Theater, and eventually a Bowling Alley among many others. The Shopping Center was deemed as one of the first suburban Shopping Centers in the region. Even as blockbusting completely change the population from almost all White to almost all black in less than a decade, the Shopping Center still retained a nice mix of tenants. 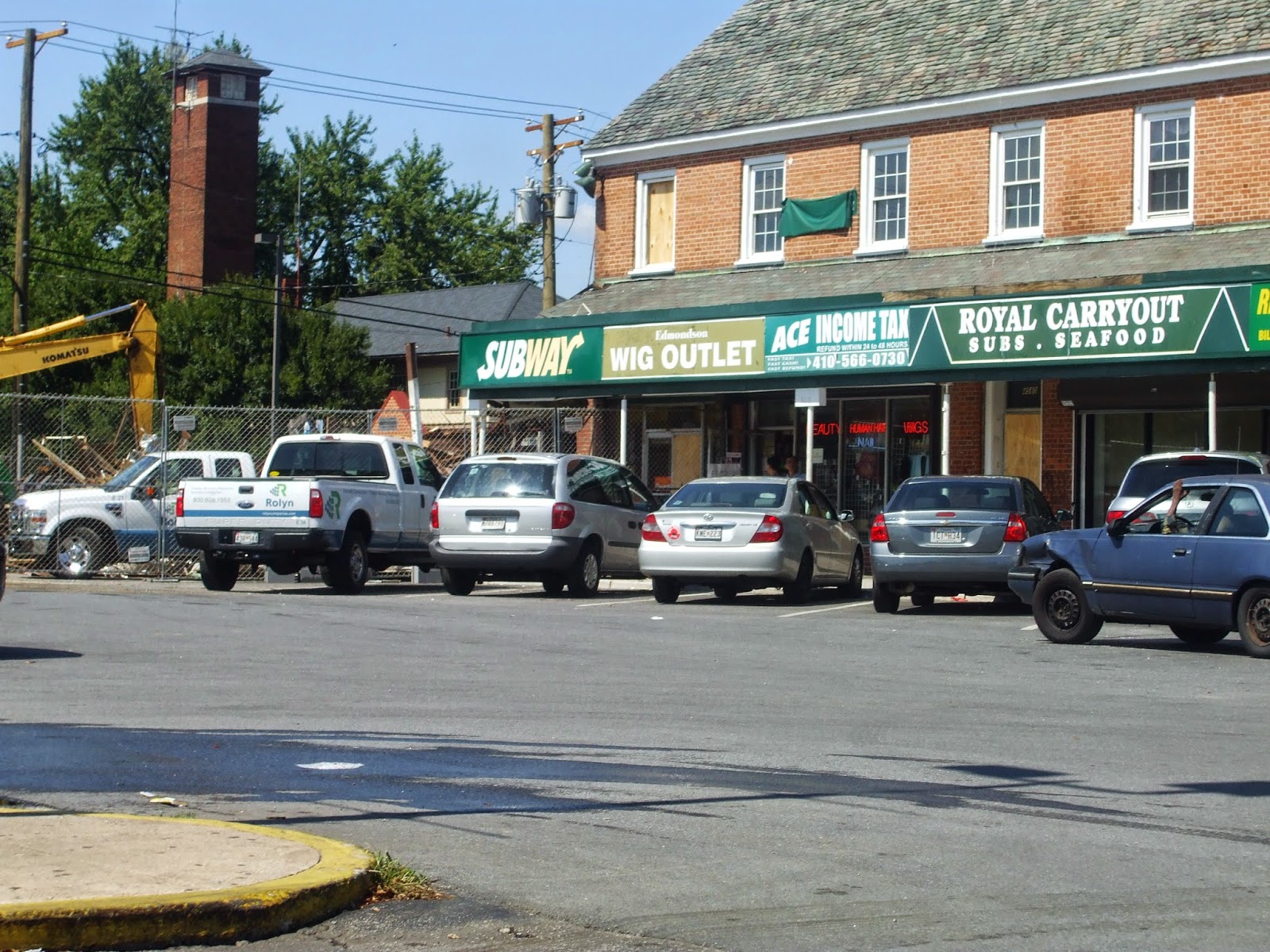 The biggest blow to the Center was and still is slumlords. One could make the argument that newer Shopping Centers just over the County Line were to blame but Edmondson Village and its surrounding Neighborhoods didn't experience population at nearly as high a rate as many in other parts of the City. There are also Shopping Centers throughout the City that despite losing large amounts of population, spent tens of millions of dollars renovations and modernizing their properties and have enjoyed a new lease on life such as Mondawmin Mall, Reisterstown Road Plaza, and the Rotunda which is currently undergoing redevelopment. There are also areas in the City where brand new suburban style Shopping Centers (more than Edmondson Village) have breathed new life into Neighborhoods with little to no Retail and perhaps may have curtailed further population loss. South-side Marketplace and Greenspring Tower Plaza come to mind.

So while all these other Shopping Centers were either being built or renovated, what happened to Edmondson Village? Very little. Perhaps some minor facade improvements were made over the years but other than that the Center looks almost identical to itself in its heyday. When I say almost I don't take into account the years of neglect it has suffered but how many 60+ year old Shopping Centers are successful today without major renovations or redevelopment? The original neglect of the Center started in the late 1970s when Harry Weinberg owned it. Although he would later become Baltimore Royalty post posthumously due to the generosity of the Harry and Jeanette Weinberg Foundation, he was actually a slumlord.

Although Edmondson Village changed hands from between the days of Harry Weinberg and the present day, Edmondson Village is once again owned by a slumlord. This time it's Carl Verstandig, owner of America's Realty Corp. Though they're not quite notorious for their lack of upkeep on their properties, they're beginning to make a name for themselves most famously in Columbia when they bought Long Reach Village Center and let it decay so bad that Howard County bought from them and will redevelop it themselves. They also own some low market strip centers in Glen Burnie that are also suffering from lack of upkeep. In addition they want to buy Owings Mills Mall, which if you thought couldn't get any worse, just America's Realty Corp buy it and prove you wrong. In fact, all of the upkeep (or lack there of) problems that are plaguing Edmondson Village are the fault of America's Realty Corp.

Now comes the hard part; actually turning Edmondson Village back into a shopping destination that draws people into the Neighborhood. First thing's first; America's Realty Corp. has to sell Edmondson Village to an experienced Retail Property Management/Leasing Agency that will make long term investments to the Center.In the short term, they must address all of the quality of life issues around the Center such as decaying structures, parking lot, and infrastructure. After that is done, the real planning comes into focus and the burning question will get answered; Is Edmondson Village relevant in its current form?
Like I had said before, Edmondson Village remains almost identical in layout to its 1947 self. In Baltimore, all of the successful Shopping Centers are either new construction or have gone through massive renovations that the majority of the original structure(s) have been replaced with new construction. In order for Edmonson Village to survive and thrive, some major changes to the lay out of the Center must happen despite its iconic status as a pioneer in suburban shopping centers.

When talking redevelopment one must look at the trends. In the case of Neighborhood Retail, these trends all point to one thing; mixed use. Recently completed mixed use projects in the City include Jefferson Square at Washington Hill and Twelve 09 N. Charles St. This works very well for the Retail component because the Residences and/or Offices above make for built in patronage for said Retail. On the same token, the Residences and/or Offices above will have the convenience of Retail offerings just a few floors below them. So does this translate into a total tear down for Edmondson Village? It does.

A compete tear down will also address infrastructure problems that are currently plaguing the Center. One of the main draws of the Center in its early days was that it has "acres of parking." which was a clear indicator of the suburban mindset that the original Architects of the Center were in. The mindset of mixed use is to built up not out. The now setback Center will be much closer to Edmondson Avenue. and will be more pedestrian oriented rather than automobile oriented. This will be all the more important with the upcoming construction of the Red Line which will have a stop at Edmondson Village. Speaking of automobiles, where they park if their parking lot is being taken away from them?

Now what will the new mix of Retail Tenants be? Well that would be up to the Community. Before and during redevelopment, surveys will be sent out to Residents of the following Communities; Edmondson Village, Rognel Heights, Hunting Ridge, Ten Hills, Westgate, Allendale, and Uplands (new and perspective Residents.) They will be asked what they would like to see at the new Center such as more of this, less of this and what type of safety improvements they would like to see as well and if they actually shop there. Chances are most of the Residents would like to see more sit down Restaurants, Banks, Coffee Shop, and fewer     low end stores. My one suggestion for Edmondson Village would be to get a Farmer's Market for the area. The success of Farmer's Markets throughout Baltimore and the lack of fresh quality produce at affordable prices would prove a big hit anywhere in the City and Edmondson Village is no different.

Although this seems like a pipe dream, Residents and Officials are in fact turning up the heat on America's Realty Corp. the Center's current owners. As the area continues to grow from the construction of Uplands as well as construction of the Red Line, the need for a Neighborhood Shopping Center that safely serves everybody's needs will become all the more crucial. The only way to make that happen however is for Residents to continue to demand the change they deserve. After all as it stands now, Edmondson Village Shopping Center is still in shambles.
Posted by Spence Lean at 10:48 AM 6 comments: