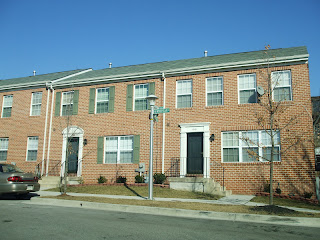 There are some parts of Old West Baltimore that have seen lots of reinvestment and redevelopment on both the public and private sectors. They include Upton's Marble Hill District, Druid Heights, and the eastern edge of Sandtown Winchester, and Heritage Crossing. On the flip side there are areas that have not seen much in the way investment including the western edge of Sandtown Winchester, Upton that isn't the Marble Hill District, and Harlem Park. Although Upton and western Sandtown do require a lot of work I will discuss them in the future, today is all about Harlem Park. 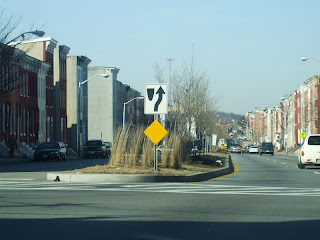 Harlem Park's biggest problem is population loss. It seems as though if Residents want to live somewhere else they simply move away rather than try to put down roots and improve the Neighborhood. As of the 2010 census Harlem Park is about 45% vacant. When I say that vacancy and population loss is the biggest problem that Harlem Park faces I open a HUGE can of worms as to why the population has dropped so dramatically but how can Harlem Park begin to experience growth if we don't get to the root of the problem? 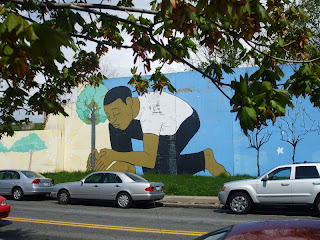 There may be a small glimmer of hope for Harlem Park. The redevelopment of the West Baltimore MARC Station shows the southern border of Harlem Park slated for redevelopment as the Red Line construction begins TOD make eventually take Harlem Park by storm but that could take years, personally I think Harlem Park should a draw on its own. 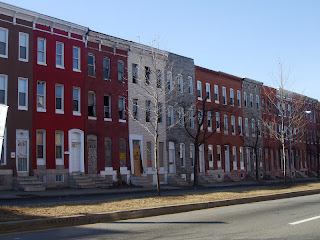 As I'm sure you're aware, Harlem Park wasn't always in bad shape, in fact it was once one of Baltimore's finest Gentlemen's Communities housing some of Baltimore's business elite most of the year except for the summer when a large portion of Residents left the City for their summer homes. At the turn of the 19th/20th century, the mostly White German Neighborhood of Harlem Park began to see White Flight both to the west where Neighborhoods such as Easterwood Park and Rosemont were in their infancy or to the north where the Roland Park Company was building large estate homes in what would eventually be Guilford, Homeland, Original Northwood, and the titular Roland Park. 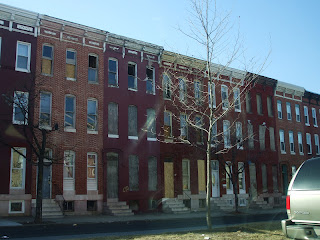 Although White Flight was in full swing before the start of World War I, Harlem Park was still thought of as an elite Gentlemen's Community only now it was becoming home to Baltimore's Black elite. Although new Black Residents were paying a pretty penny for their new homes perhaps more than a comparable home in a White Neighborhood would fetch, I wouldn't call this "blockbusting" since there were no corrupt Realtors trying to make a quick buck off of White fears and the lack of housing options in the Black Community. 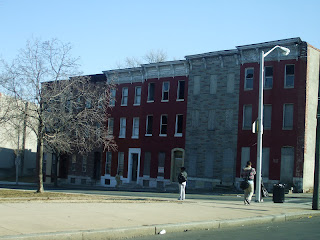 By the roaring 20s Harlem Park (as did all of old West Baltimore) had turned into a mixed income Black Community with wealthier Residents living in the grand row house mansions while Residents who were more working class took residence in the "alley homes." Pennsylvania Avenue served as a Downtown Area for Old West Baltimore as a whole featuring the City's best Jazz Clubs and Movie Houses. 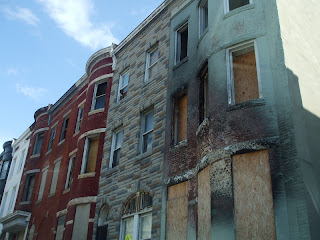 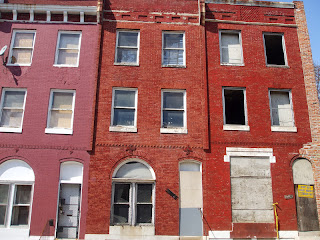 After World War II, the White flight to the suburbs and the subsequent Black repopulating of White Neighborhoods on the outskirts of the City was in full force. Since Harlem Park is not and hasn't been on the outskirts of the City for decades, its population was beginning to thin out as there was no real source in which a new population influx could be found. Another blow for the Neighborhood was what was then called "slum elimination" which was actually the erection of the notorious public housing high rises of Murphy Homes and Lexington Terrace. 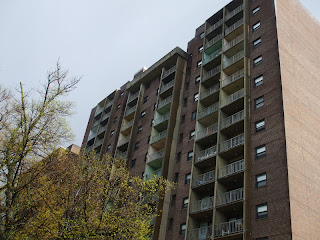 Slum elimination can come in many forms, in the 1950s and 60s it came in the form of Interstate Construction. I feel bad calling it "slum elimination" because to construct the "interstate" that effects Harlem Park it wasn't slums that were eliminated. It was working class and middle class homes between Franklin and Mulberry Sts. The Home Owners who lived where the proposed interstate was going were given very little for their homes and given that so many people's net worth is wrapped up in their homes, the once middle class Residents became poor thanks to this supposed "miracle interstate." 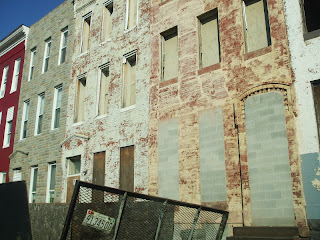 This "interstate" turned out to be a curse, it was supposed to connect to I-70 when it was extended into Leakin Park to meet I-95, the spur near Harlem Park would connect I-70 to Downtown. Harlem Park at the time was hanging on a delicate balance between minimal blight and turning into a major slum. This "interstate" was the final nail in the coffin not only for Harlem Park but Old West Baltimore as a whole. To add insult to injury, the connection was never completed thus making what was built complete useless, this "I-170" is what's known as today's "Road to Nowhere." 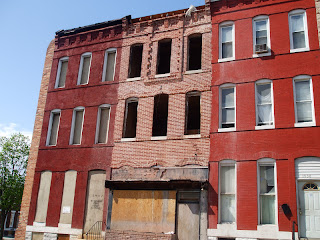 Today the damage done by generations of poverty and poor policy planning have taken their toll. Harlem Park's vacancy rate as of the 2010 census is 45% which doesn't include all the vacant lots providing eye sores and a hot bed for trash. It's no secret that Harlem Park is suffering and the City is letting it go to the dogs as a Neighborhood that can't be saved. Me? I have yet to find a Neighborhood that isn't worth saving. It's time for Harlem Park to see its day in the sun. 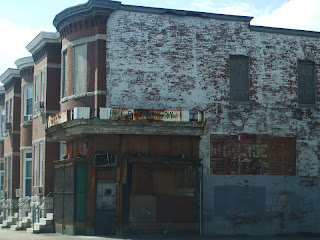 Lets keep in mind that as part of the Red Line construction there is a proposal for redevelopment of the Neighborhood's southern borders with high density Apartments or Condos or TOD if you will. Given how often the Red Line is tweaked and with funding and construction dates constantly being delayed, I'm not holding my breath for progress on that front. Even so, Harlem Park is an entire Neighborhood that needs help, and doesn't start and stop at the Red Line. I would also like to point out that as the title suggests, I want Harlem Park to be a draw on its own. 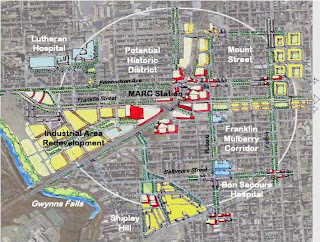 When creating a Master Plan the first thing to do is draw on the Neighborhood's strengths. Other than the obvious (close to the proposed Red Line) I can think of two others; first the "block parks" and the new Senior Apartments recently built. Most if not all square blocks in Harlem Park have parks behind the Row Homes. Although they've become a liability as they've become littered with trash and drug litter. I think that these block parks can be an asset once again. Neighborhood Residents can reclaim control by planting flower gardens and vegetable gardens that could be sold at Farmers Markets. Also there have been two brand new Senior Apartment developments known as Edmondson Commons and Harlem Park Gardens. These two developments have been a great help in Seniors in the area on fixed income find clean affordable housing that meets their needs. These two success stories can be used as building blocks for reinvestment and redevelopment in the Neighborhood. Properties around these development should be first thus allowing new housing and rehabbed housing to spread like wildfires. 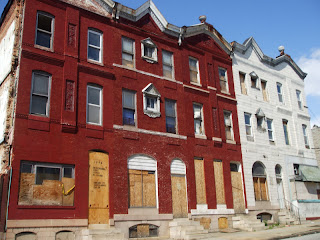 I can't describe the strengths of Harlem Park without discussing its weaknesses too. Harlem Park has a fleeting population, problems with drug addiction, high crime, high unemployment, lack of quality retail, and a lack of constant City Services. I think a decent portion of these problems can be reduced if not solved by investing in the Neighborhood's housing stock a la Sandtown Winchester. Sandtown has seen a good amount of redevelopment and reinvestment in its housing stock with help from the Enterprise Foundation. The benefits are contained only within the effected areas. It hasn't had the domino effect people would have liked but that just means that other areas need that same intervention. 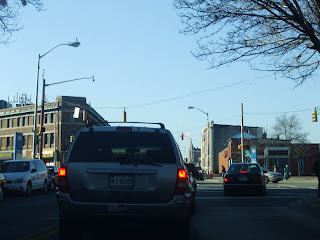 Harlem Park is due for that very same attention and I think it will spur growth by all stretches of the imagination. One great thing about the Enterprise Foundation is that it employed existing Residents to build the new homes which provided jobs to the Community. Baltimore has a large amount of unemployed construction worker, an issue I came head to head with while helping a gentlemen run for City Council last summer. Sure, there are lots of development projects in the works across the City but they have snubbed the local Construction Unions by bringing in outside workers. This will not be allowed when rebuilding Harlem Park, Harlem Park will be a local grass roots efforts from start to finish. This will also allow for Job Training for those looking to learn the construction trade. New and rehabbed homes and the jobs they bring may solve other problems that Harlem Park suffers. Crime and drug addiction thrive in poor Neighborhoods where there are a lot of vacants and a lot of Residents are unemployed. With Residents at work and new Residents moving in who are also employed, the drug trade and the crime it comes with be dealt a major blow. 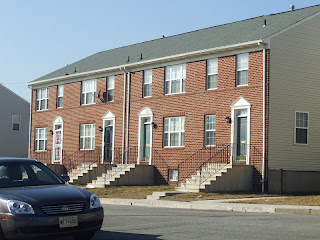 We've seen how Sandtown & Marble Hill can benefit from large investments in the housing stock which in return brings jobs to the Neighborhood, Improves the appearance of the Neighborhood, and can help erode crime from the rehabbed and redeveloped blocks. Now it's time for Harlem Park to benefit the same way, everybody knows it's overdue.
Posted by Spence Lean at 1:10 AM 3 comments: