The Convention Center & Arena: One Site 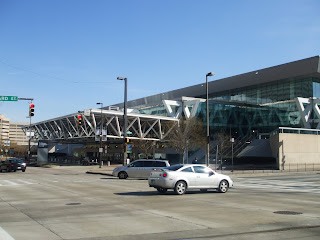 As Downtown and the Inner Harbor continue to redevelop, there are still things that are old and dated and need to be either modernized or redeveloped to make Baltimore a world class showcase City. This time it's the Convention Center and the Royal Farms Arena. The Royal Farms Arena (nee Civic Center) was a product of the Charles Center redevelopment in which many of the Office Buildings have since been modernized in favor of a more mixed use approach. Now it's the Arena's turn. 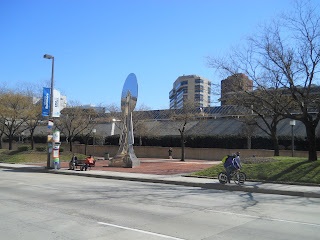 Also in need of a complete do over is the Convention Center. The Convention Center was built shortly after Harbor Place but has since been expanded multiple times. Although the expansions have helped attract more conventions, the age, layout, overall unattractiveness of the building, and Baltimore's reputation as being crime ridden has hurt the number of conventions annually. This post will not be addressing the crime aspect (although it has to stop) just the viability and the appearance of the building. Similar buildings and structures have been demolished to make way for more attractive replacements such as the Mechanic Opera House and the McKeldin fountain to name a couple. 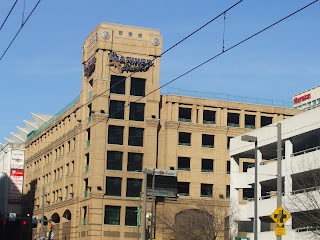 It would be a massive yet worthwhile undertaking to redevelop just one of these buildings but to redevelop both? And yet I'm suggesting that it be done. Although that undertaking is as massive as it is, I think if the project were thought of just one undertaking, it make it seem less daunting and the end game is one building instead of two. Does this mean that one of the buildings won't be redeveloped on its original site? Yes, in this case it's the Royal Farms Arena. Although it's close to the Harbor, many agree that isn't close enough. Some have called relocating it to Pier VI but I agree building a building that houses both the Convention Center and the Arena will not only keep the site viable, but also bust year round. 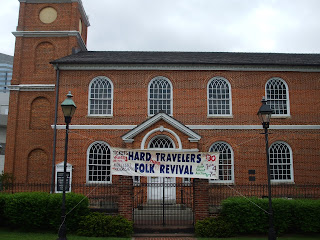 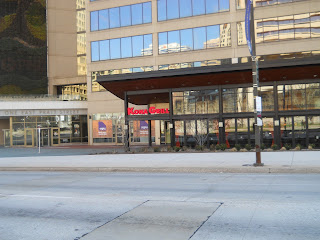 The part of the site east of Sharp St. will be the Arena. This time the parking garage will be underground and the Arena will be completely above ground. Like the Convention Center parking garage, the roof of the Arena will also be a park with green space. The Arena section of  the site will contain a high rise Apartment Building and ground floor Retail on both Pratt St. and Charles St. 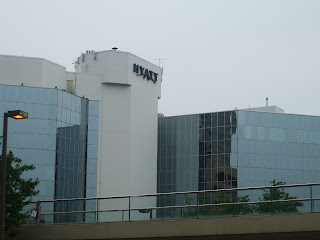 I actually want to take this time in the post to discuss the 200 block of S. Charles which the eastern end of the Convention Center/Royal Farms Arena will abut to. It appears to be an outback to the buildings it serves including the Hyatt, Sheraton, and the PNC Bank Building in addition to the Convention Center/Arena. I would suggest that the Hyatt either adds more and/or relocates its restaurant(s) to have a ground floor entrance facing Charles St. and the PNC Bank building adds Charles St. facing Retail space next to Kona Grill, and the Sheraton enhances its entrance to Morton's the Steakhouse in order to provide a more welcoming and Pedestrian friendly environment to the 200 block of S. Charles St. 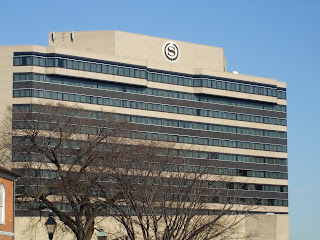 In order to redevelop both the Concvention Center and the Royal Farms Arena, a massive commitment of public, private, local and state funds will be required to make this a reality. Now, I haven't forgotten about the site that the current Arena sits on and what to do with it. I'll save my plans for that for another post. 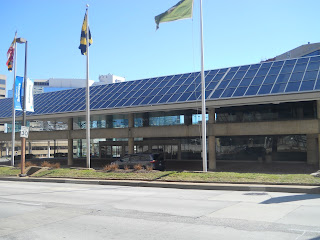 Posted by Spence Lean at 6:25 PM No comments: 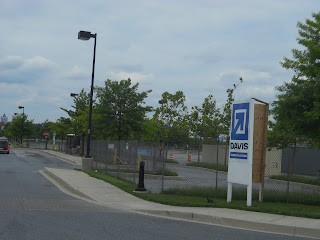 So it has come to my attention that there has been more than one pitch to Amazon to relocate their east coast headquarters to Baltimore City. The main one that has been discussed in great length has been for it be at Port Covington which is the largest uninterrupted plat of land in the City slated for development. Well, it turns out that the Old Goucher Neighborhood Association, whose Neighborhood is located around Charles North and Penn Station has its own Amazon ideas. The ideas are not bad ideas by any stretch of the imagination, but Port Covington is the best choice. 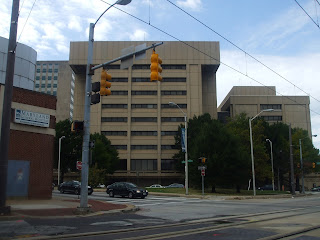 A big reason for these two alternate sites is because they're in parts of the City that hug Downtown and that the City and State may have to spend less money preparing new infrastructure for as compared to Port Covington because the infrastructure is already there. The problem with that argument is the City's existing infrastructure is crumbling more and more by the day. The amount of repairs needed at either site would be astronomical and the costs would supersede the starting from scratch approach used at Port Covington. Another problem is Historic Districts. Both alternate sites border on them and if Amazon decided they needed to expand, they may decide to do it into historic housing stock that will destroy Neighborhoods. In Port Covington, they can always expand to Westport. 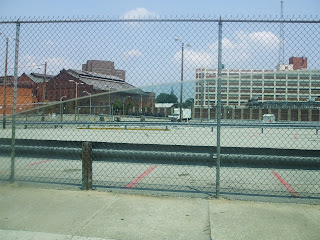 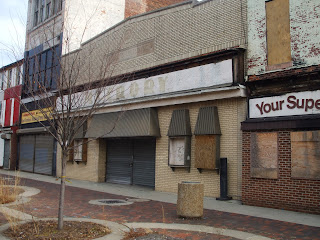 First there's Old Town Mall. Although these buildings are crumbling they are an historic districts and there are plans to painstakingly rehab them and make the Community thrive again. A big plan for Old Town Mall includes attracting a Full Service Grocer. Although the Amazon Headquarters would make it easier to attract such a Grocer, it would most likely involve tearing down Old Town Mall. 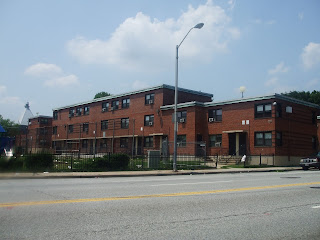 Next there's LaTrobe Homes. East Baltimore has experienced a lot of redevelopment of its public housing stock in the past 20 years with more to come. This has left existing Residents feeling as if they have no control over the community they live in. Although it would be nice to revitalize the entire area in between Downtown and Johns Hopkins Hospital, I don't believe that tearing down the entire existing community of LaTrobe Homes and surrounding areas is the way to do it. I would much rather see existing housing stock rehabbed and reinvested in and restrict new building to vacant lots. 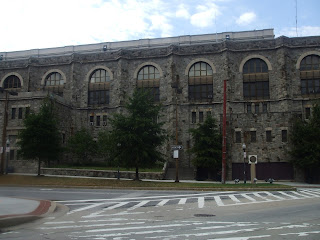 In addition to the Edison Lots, the Old Goucher Neighborhood Association would alternately like to see Amazon located at the State Center Site. The State Center site has been in the news since 2005 when the State and local Developers decided to join forces and redevelop the site which currently houses many State agencies in aging Office Buildings as well as surface parking lots. The economy has stalled this redevelopment project which would rehab and/or replace existing Office Buildings and would add mixed use development on the surface parking lots. 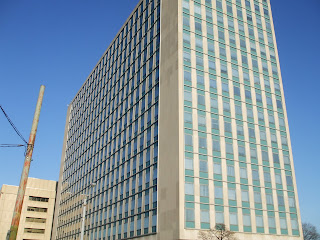 This project gained and lost steam as the economy stopped and started up again, then Larry unilaterally pulled the plug on it. He thinks the area would benefit from having sports arena there instead of the all the existing full time workers in addition to the influx of new workers and residents brought in by redevelopment. Right now nothing can really happen at that site until a multitude of law suits are settled so even if Amazon chose that site, they might have to jump thorough hoops for it. 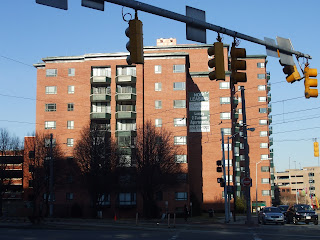 Now lets say by some miracle of miracles, Amazon not only chooses Baltimore, but more specifically, the State Center Site to house its new headquarters. Let me tell you why that site wouldn't work. The Site, bordered by Howard St., MLK Boulevard, Dolphin St. and Madison St. Again, this property is not large enough to house 8 million square feet of office space. Unlike the Edison Lots, this site is even more contained and can't be expanded upon. It borders even more historic Neighborhoods such as Mount Vernon, Bolton Hill, Seton Hill, and Upton. How much of these Neighborhoods would have to be torn down? 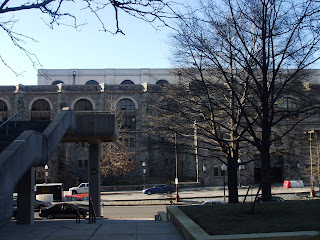 What's great about the now scrapped plan to redevelop State Center (unless law suits go in a specific direction) is that it contains itself to the land already there. It's not meant to tear down its surroundings rather it's meant to enhance them and encourage investment into them. I'm aware that West Baltimore borders this land and the area is suffering from a multitude of urban decay, Amazon will do nothing to combat the underlying problems causing it. Although they will add jobs to the City, they will have to bulldoze large sections of homes some which are occupied and move the decay somewhere else. West Baltimore needs investment in existing Neighborhoods and Residents and if Amazon does in fact choose Baltimore, I would like to see them partner with the City and State to provide those needed funds from the headquarters in Port Covington and Westport. 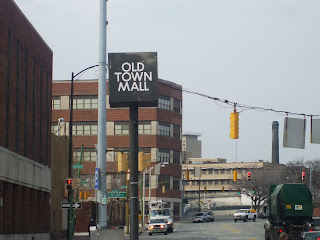