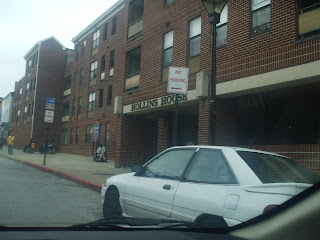 Poppleton is the text book definition of what happens to a City Neighborhood plagued by urban decay, population loss, high unemployment, an eroding tax base, and a high concentration of poverty. At the same time, Poppleton is very close to Downtown and its numerous institutions and Employment Centers, the biggest being University of Maryland Baltimore and University of Maryland Medical Center. For that reason, Poppleton has been on the radar of City Planners and Developers to massively overhaul the Neighborhood and transform it into a thriving mixed use mixed income urban haven. Unfortunately, despite numerous attempts and numerous projects to do so, nothing has really gotten off the ground. Until now. Redevelopment appears to finally be moving forward at last. 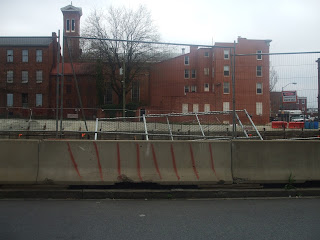 The downfall of Poppleton can be traced back to failed "urban renewal" efforts. These attempts at urban renewal and slum removal involved dividing Neighborhoods with highways and demolishing what very well could have been historic housing stock in favor of high rise public housing. In the case of Poppleton that means the infamous "Road to Nowhere" and the equally infamous Lexington Terrace Housing Projects. Lexington Terrace was built next to the pre-existing Poe Homes Public Housing Development. Although Poe Homes is a low rise Community, it still created a high concentration of poverty when coupled with Lexington Terrace. 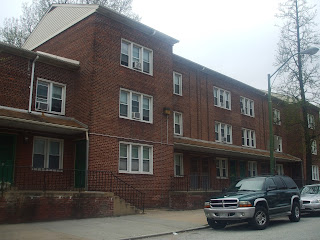 Middle Class Residents of Poppleton left the Neighborhood in search of newer safer housing. Given how outnumbered they were and the escalating crime and decay that came with Lexington Terrace, it's hard to blame them for doing so especially as segregation in Neighborhoods such as Edmondson Village had been lifted. This left Poppleton in shambles. To make matters worse, Martin Luther King Jr. Boulevard was completed in 1982 though not an interstate, cuts off the Neighborhood from Downtown. 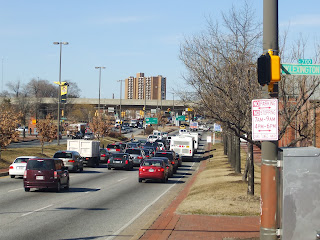 As the 20th Century drew to a close, Planners wanted to capitalize on Poppleton's proximity to Downtown, more importantly UMB. To expand the success of the growing University into Poppleton, but first the biggest source of urban decay had to go; Lexington Terrace. With funds from the HOPE VI program, Lexington Terrace was demolished and redeveloped with the "Townes at the Terraces" a town home development with a low rise Apartment Building for Seniors, a Rite Aid Pharmacy, and a small Office Building. About 1/3 of the town homes were market rate units for sale while the remainder of the development is public housing. 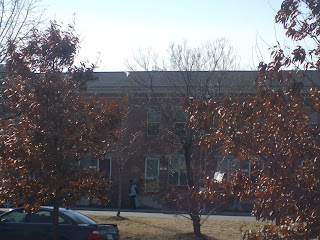 Although it's been said that Lexington Terrace's successor doesn't have a broad enough income mix or crime is still prevalent in Poppleton, I would argue that despite these shortcomings, Townes at the Terraces has been successful at reducing crime in Poppleton, especially when comparing it to the days of Lexington Terrace. With Lexington Terrace a thing of the past, now Poppleton can begin its renaissance. 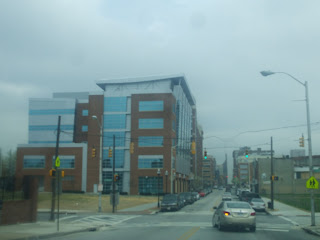 For any part of the City to revitalize, it must first be a draw to new Residents. One way to do that is to put a large Employment Center in close proximity. As these discussions about how to revitalize Poppleton were going on, so too were discussions regarding UMB building a Biotech Park. With the land owned by UMB east of MLK Boulevard reaching build out, it became clear that in order to build the Biotech Park, UMB would have to venture west of MLK. There's your new draw for Poppleton. 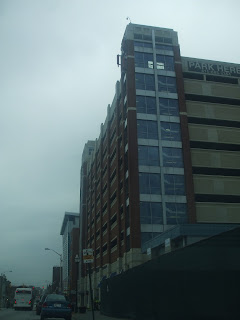 Baltimore St. has always acted as a Main Street for Poppleton and surrounding areas so it would make sense that is where the new Biotech Park would be located. The blocks containing the Park also had lots of vacants so it would be relatively easy to buy up those properties for demolition. Construction of the Biotech Park started in the mid 2000s and its progress was halted due to the economy crashing in 2008. Slowly but surely more and more buildings are going up and more and more space is being leased. 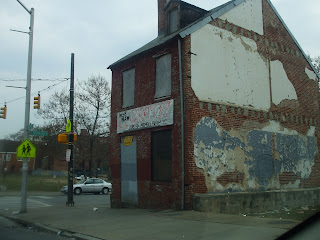 On the Residential side, there has been some redevelopment along Fayette St. and little else But finally, land has been amassed and cleared for major residential redevelopment the likes of which haven't been seen since the construction (and subsequent demolition of) Lexington Terrace. The southeastern edge of this redevelopment parcel borders on the northeastern edge of the Biotech Park. The goal of connecting the two developments will create live work area in Poppleton and Biotech employees who don't live in Poppleton will feel safe walking around the Neighborhood. This can also be achieved by revitalizing Baltimore St. west of the Biotech into a Main St. for the Community. Although most buildings here are dilapidated, I would still like to see their facades preserved (similar to marketplace at Fells Point.) 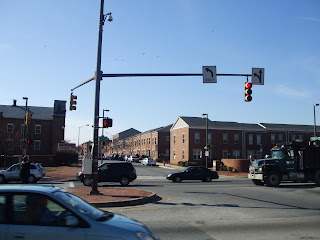 The land poised for residential redevelopment is located in the blocks north, west, and east of Excel Academy at Francis M. Wood High School. So far one developer has submitted plans for a redeveloped Poppleton. Their plans, located along Schroeder St. between Fairmount Ave. and Lexington St. includes a large mixed income Apartment building that mimics the recently completed "FItzgerald" at the edge of Mount Vernon and Bolton Hill (pictured below). Centerwest's upscale styling shows that the redevelopment efforts in Poppleton are going for an upscale look and are looking a greater mix of incomes for future Poppleton Residents as well as developments. 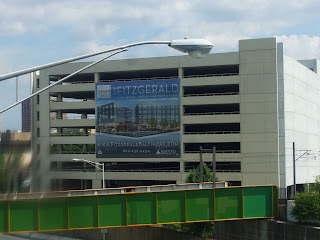 Centerwest is just one development in an are marked for large full scale redevelopment but what it symbolizes is much greater. It shows that redevelopment in Poppleton is finally moving forward. Hopefully with the case of Centerwest, the mantra of "If you Build it They Will Come" will ring true, both with new Residents and new developments.
Posted by Spence Lean at 9:46 PM No comments:

H&S Bakery: The Final Piece of the Puzzle 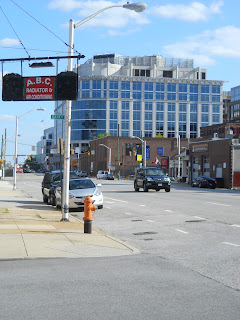 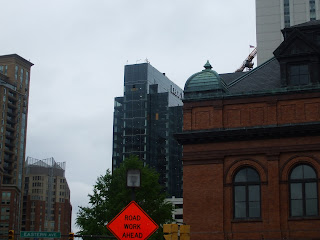 H&S Bakery isn't just the final piece of industry in the middle of the gentrified neighborhoods of Inner Harbor East, Fells Point, and Little Italy. It holds a special place in the hearts and minds of those who designed and developed Inner Harbor East. In fact, had it not been for H&S Bakery, Inner Harbor East may not have come to fruition as we know it today. 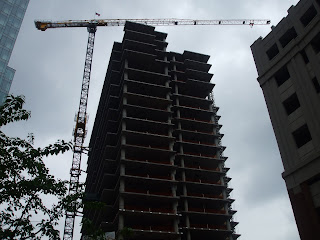 While other industries in what is now Inner Harbor East either went belly up, move to the suburbs or out of Country, H&S remained in place as it enjoyed the prestigious status of baking rolls and buns for McDonalds Restaurants as well as a long list of other clients. The owner of H&S Bakery, John Paterakis did quite well for himself financially running a super successful industrial sized Bakery that like many successful Businessmen, he chose to invest his profits. 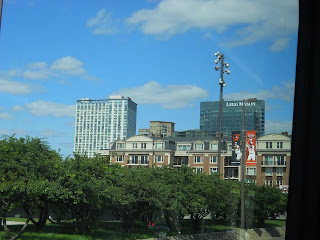 Unlike them chose an investment whose returns wouldn't generate any returns for a long time. Even then it wasn't a sure thing. The year was 1984 and the success of Harbor Place was proving to be a big boost for the area. The notion that if you had waterfront property, you were sitting on a huge payday was just beginning to gain traction. That early in the game there wasn't much development on the waterfront that wasn't industrial wasteland. Paterakis had the vision that one day the land surrounding his plant would be very valuable and that glitzy high end mixed use waterfront would be in demand. So he bought up the land that would one day become Inner Harbor East. 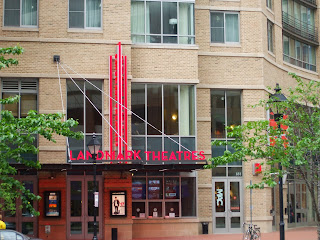 Critics thought that Paterakis had lost his mind. They either thought that he would lose his shirt or that any returns on his investment would be years if not decades into the future. Petarakis however, was in this for the long haul. As new developments began popping up around the Harbor and gentrification overtook nearby neighborhoods such as Fells Point, Canton and Federal Hill, the time had come to start planning and constructing on Paterakis's land. It showed that there was an intense need for high Apartments, Condos, Retail, Office Space, and Hotels around the Harbor, more so than what was already there. With that value piece of information, building began and high end Retail such as Whole Foods flocked to the area as did Hotels and Residences such as the Four Seasons and the offices of Legg Mason relocated its headquarters to Inner Harbor East from Pratt St. The moving of Legg Mason from Pratt St to Inner Harbor East is just part of a trend of Downtown Offices moving closer to the Harbor. 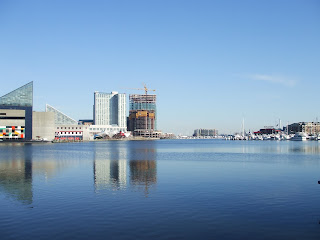 The collapsing of the economy and therefore the Real Estate Market across the Country actually had a minimal effect on Inner Harbor East. Sure some Retail leases fell through and the Residential part of the new Four Seasons is only now being built while the Hotel portion was completed years ago but considering all of the development plans throughout the region that were delayed, greatly modified, or scrapped all together, Inner Harbor East remained relatively stable. 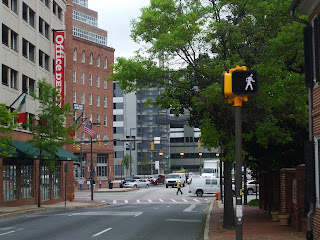 Now here we are in 2016. To the naked eye it may appear that Inner Harbor East has been completed. In fact, Harbor Point has begun construction which may be a signal that this is in fact the case. However, there's still one piece of the puzzle left; HS Bakery. 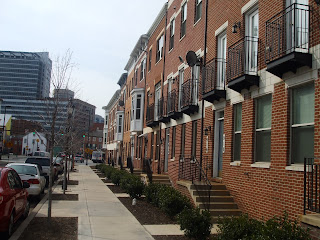 Although H&S Bakery watched the downfall of industry around the Harbor and was the lone standout when the area was all but vacant and has initially stuck around as the glitzy sky scrapers went up and the row houses were gentrified, wasn't supposed to stick around forever. In fact, a new site has been purchased in Hollander Ridge east of Armistead Gardens that will be the new home of H&S Bakery. 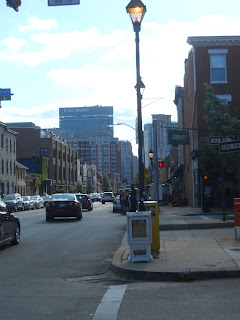 In Hollander Ridge, the land is much cheaper and is much easier to house an industrial warehouse. John Paterakis stands to make a lot of money by selling off the land that his current Bakery sits on which more than pays for his move to Hollander Ridge. As the Bakery grew, it began taking up more and more City blocks which short of breaking up the urban grid, made it impossible to add on to existing buildings so other City blocks were acquired to build more and more buildings. 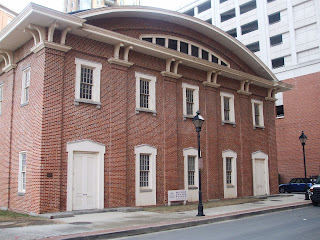 With H&S Bakery in Hollander Ridge, all of the sudden six City blocks will now become vacant. Given that H&S's buildings aren't glitzy mixed use high rises or gentrified historic row homes, it's quite obvious that these buildings will be torn down. There's a 7th out of place city block in the midst of Inner Harbor Harbor East that's a surface lot where plans to a large sky scraper have surfaced. Anchoring this new building will be a new larger Whole Foods given that the current one has out grown that location. There are no plans for what will go in place of H&S Bakery once torn down. 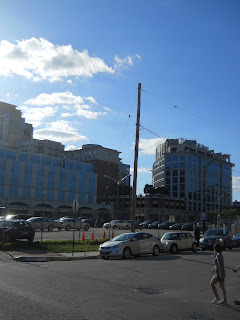 With the construction of Harbor Point commencing and almost all blocks of Inner Harbor East developed, one would that think that Inner Harbor East would already be complete. As it turns out, H&S Bakery will vacate its longtime head quarters showing that there is still a final piece of the puzzle left in Inner Harbor East. It's a mighty big piece at that.
Posted by Spence Lean at 9:22 PM No comments: