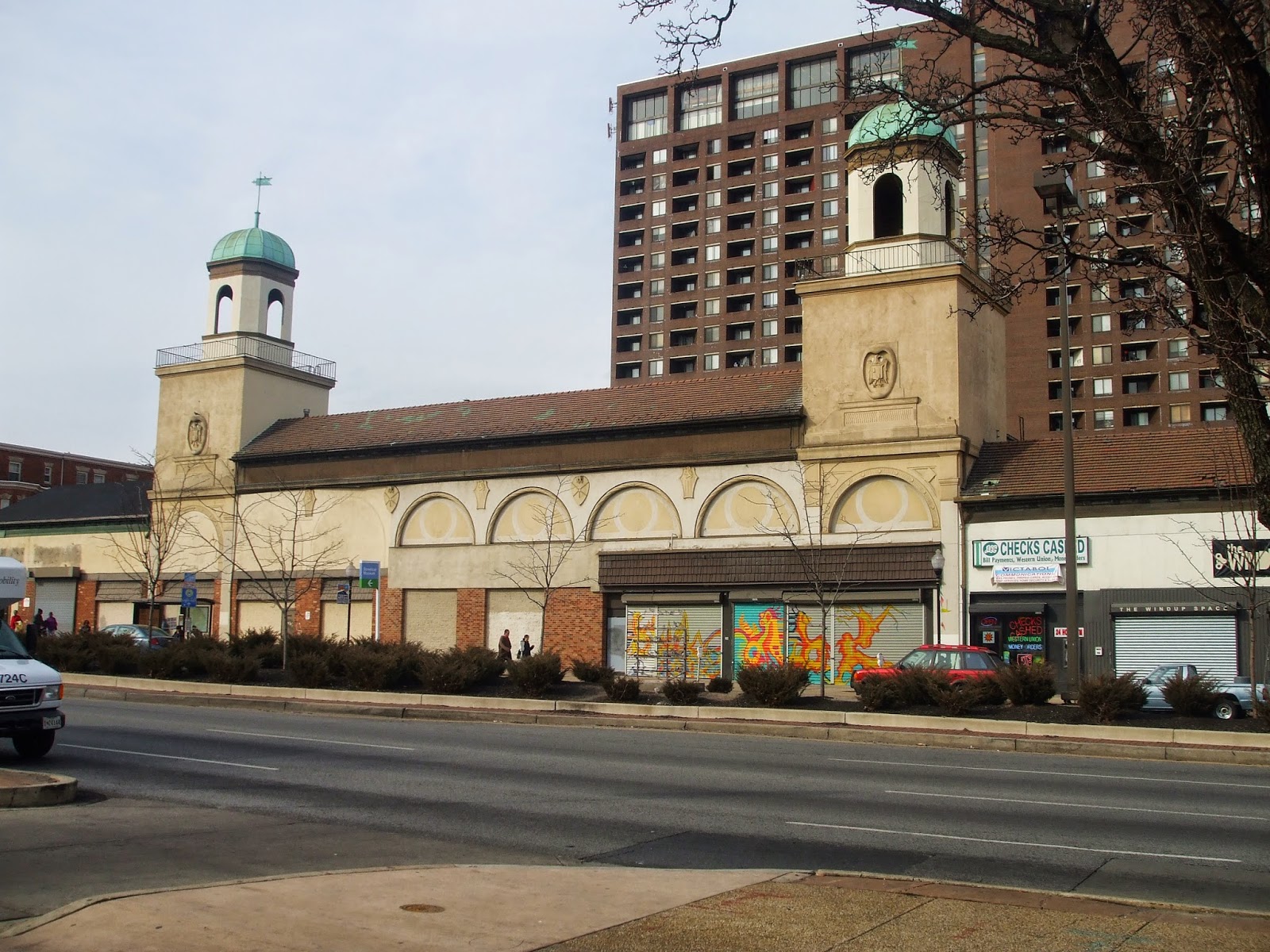 From the middle of the 20th Century and up until the 2000s, North Avenue has always been associated with some of Baltimore most blighted Neighborhoods that nary a developer or investor would dare touch. Much of that still holds true today however, the Station North Neighborhood has given a sign of life to a select few blocks of North Avenue. The question is, how do we capture that synergy from Station North and help it spread from Walbrook Junction to Berea. I've got some ideas and there are already a few signs of life that I will bring to light to ensure North Avenue as Baltimore's Spine for reinvestment. 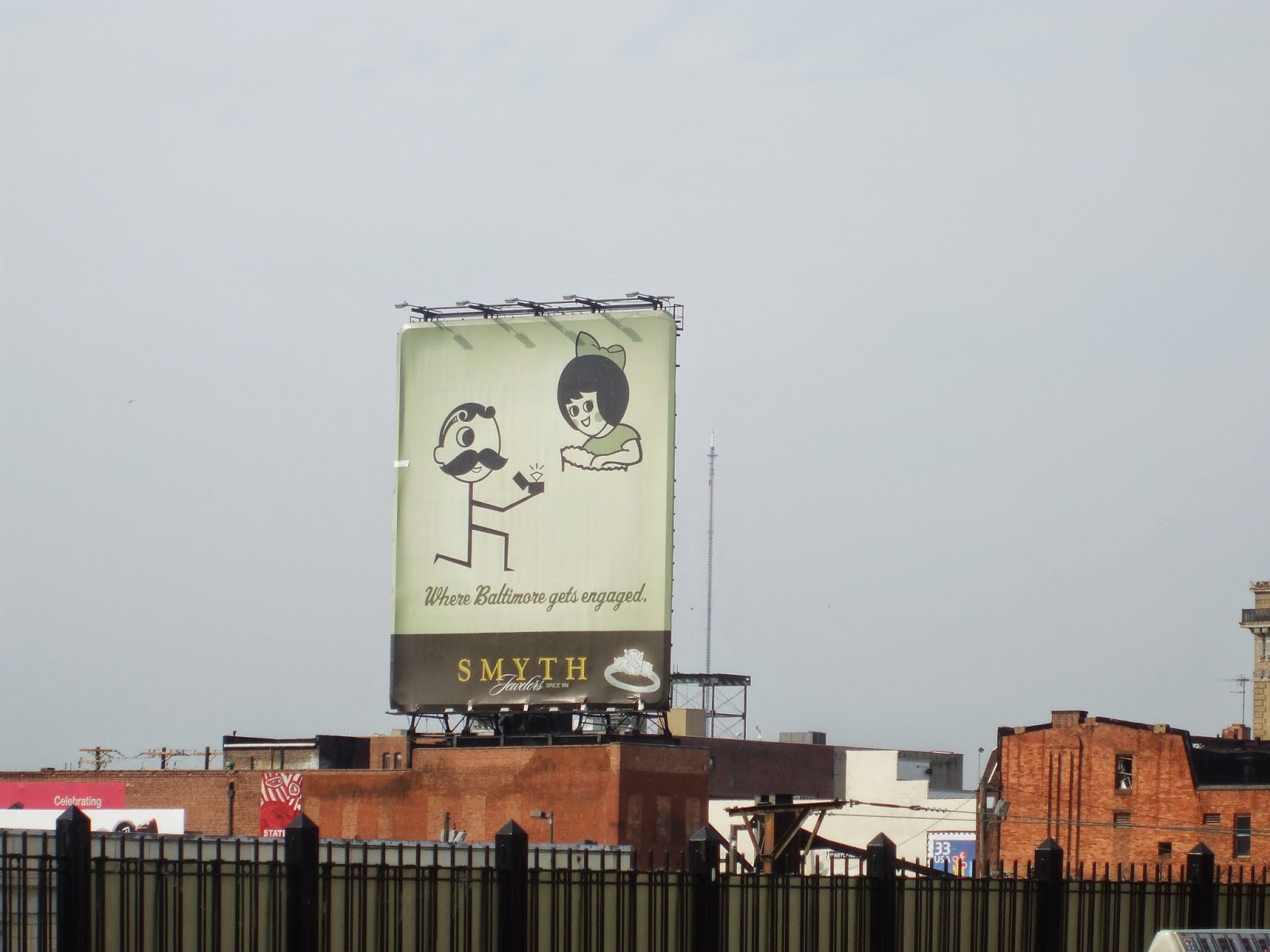 In order to make all of North Avenue a viable corridor, we must look at the ground zero of reinvestment; Station North. It appears the reason it works is due to location location location. Nestled in between the already thriving Mount Vernon and Charles Village Neighborhoods and just blocks away from Penn Station, how could this Artist Enclave NOT be thriving? Businesses are opening up that serve the Neighborhood and draw people in from other Neighborhoods while creating a welcoming environment in the process. As a bonus, very chain stores exist which adds to the unique diversity of Station North. 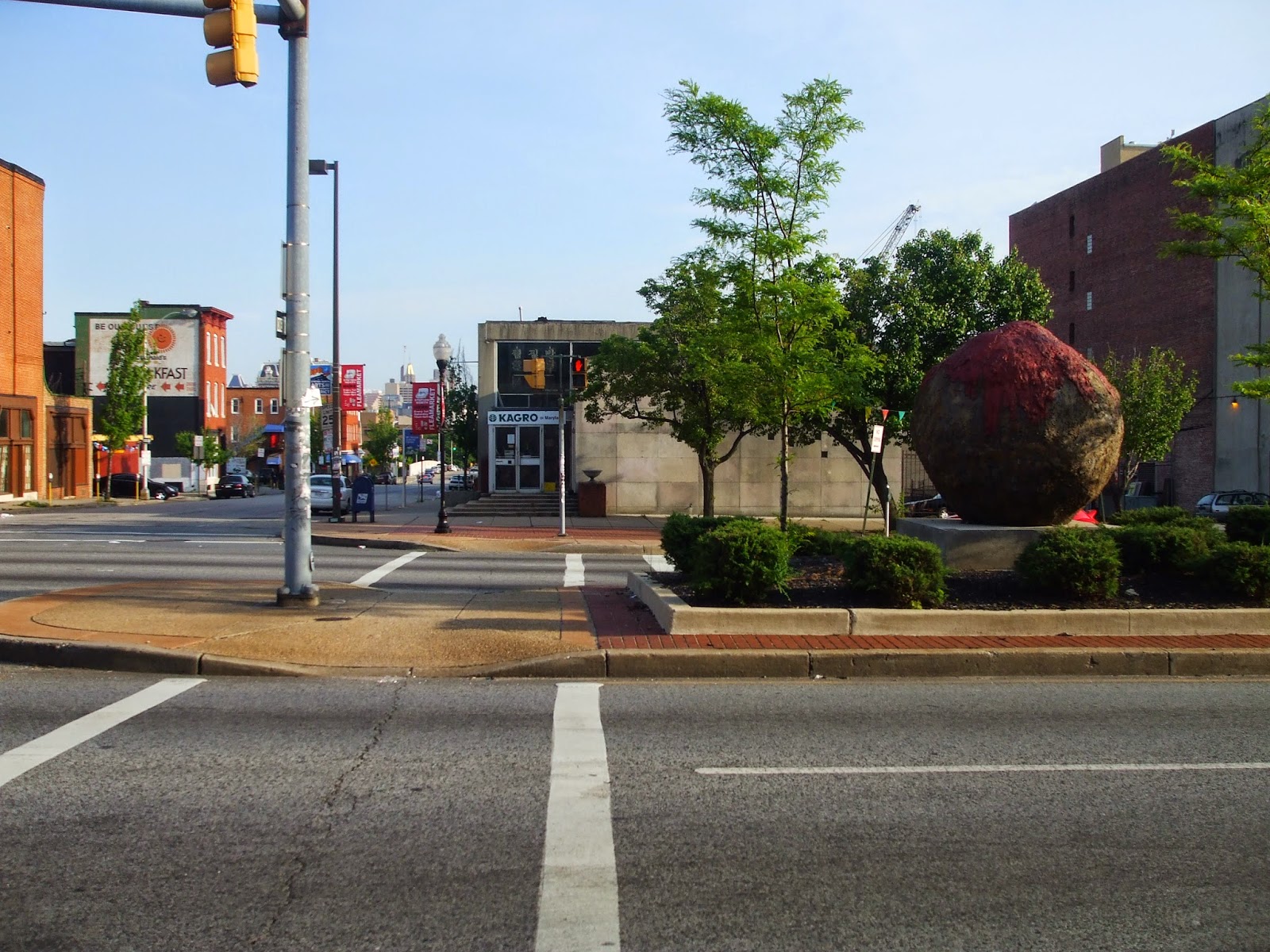 For a few blocks on North Avenue from Howard St. to St. Paul St., there are gorgeous streetscape enhancements done by local Community Artists. In addition to well landscaped medians there are also sculptures that add to the unique welcoming environment. The only problem is these enhancements are only a few blocks long. After that, on either side of North Avenue, the vacated blighted landscape resumes. I think these streetscape enhancements should be extended eastbound to Greenmount Avenue which is the technically the eastern edge of Station North and westbound to Pennsylvania Avenue which will help connect Bolton Hill, Reservoir Hill, MICA, and University of Baltimore to Station North aesthetically. This will give the illusion that the reinvestment area that is Station North continues down a much longer stretch of North Avenue. 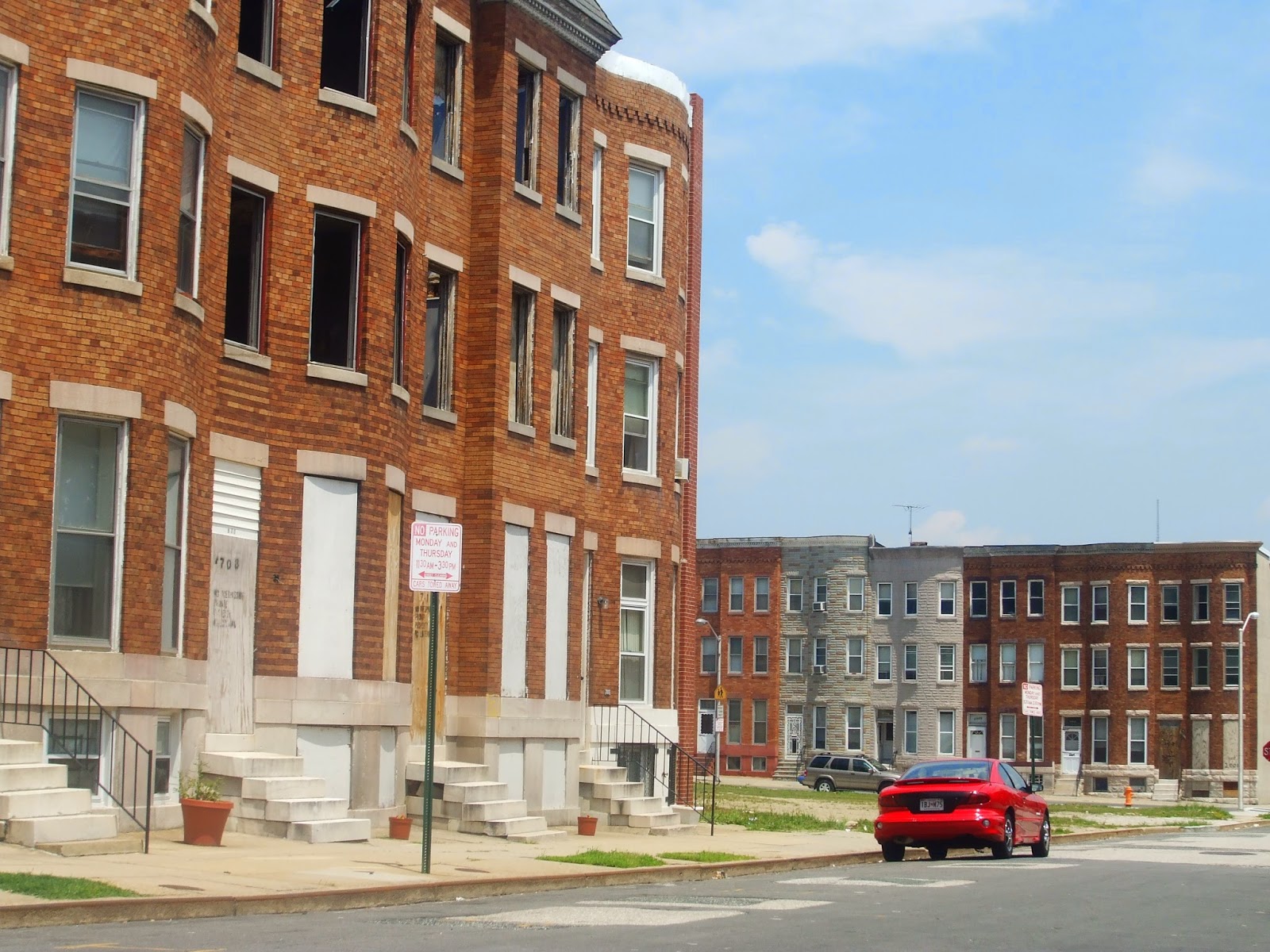 Now lets talk buildings east of Station North. There are lots of Row Homes, and Businesses that are boarded up and vacated and even if they are occupied they are in a severely distressed state. Just east of Station North along North Avenue is the Headquarters for Baltimore City Public Schools. This is a major Employer that doesn't benefit the area at all. Think about it, shouldn't there by a demand for adequate housing and Retail so School System Employees can live near their work? One would think so. 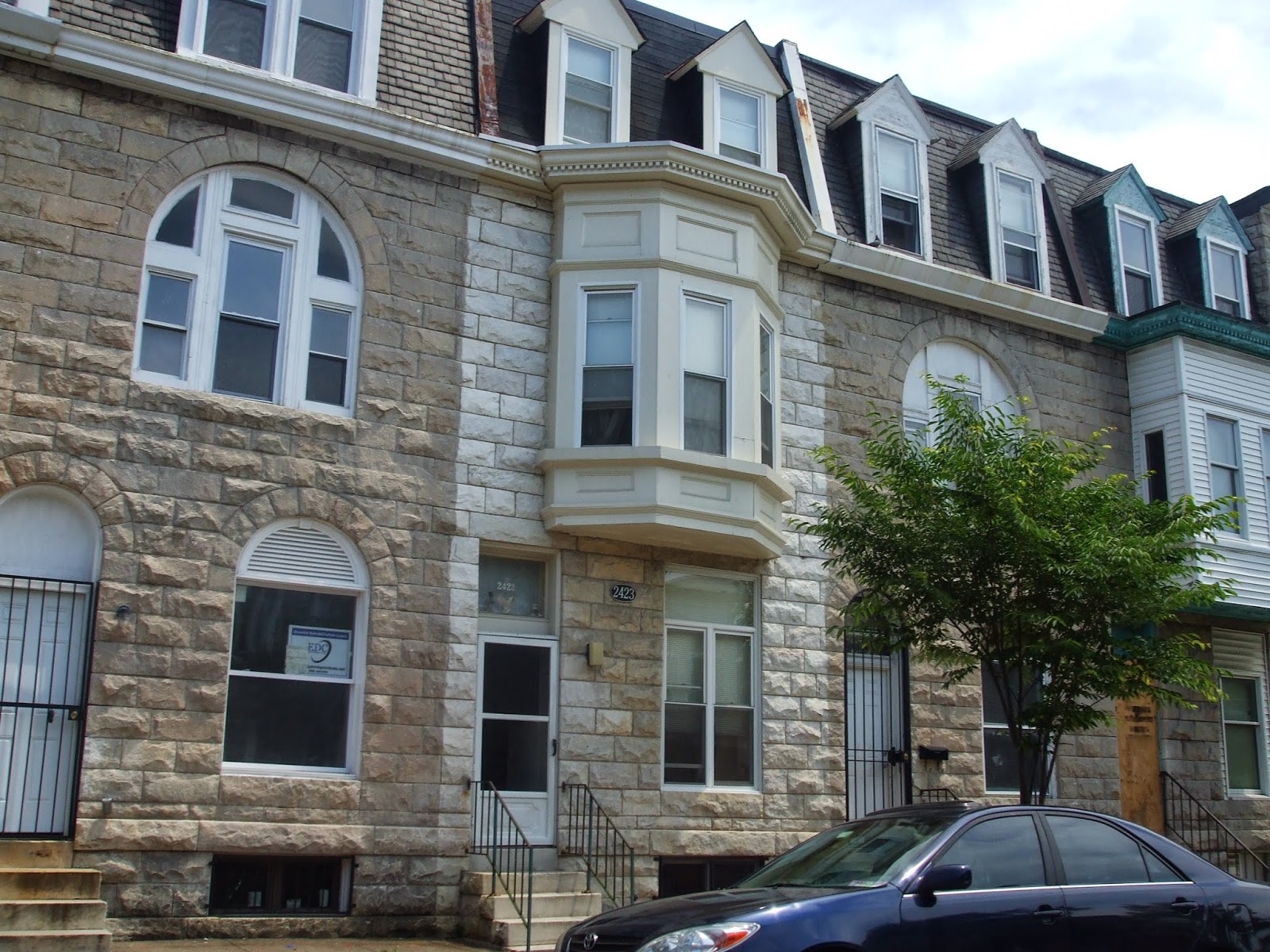 Fortunately however, there are plans for major redevelopment on the horizon for much of the Barclay Neighborhood. Barclay is just above North Avenue and east of Station North. Barclay has become blighted with an ever increasing vacancy rate and unhealthy living conditions for Residents left behind. Redevelopment was in the air for Barclay in the mid 2000s however the economy collapsing has put the brakes on these plans. When it comes time to redevelop Barclay however, North Avenue must adjust itself to serve the everyday needs of the new Barclay Community. This can be done by limiting commercial uses only to North Avenue and leaving the remainder of Barclay new and old to be solely Residential. 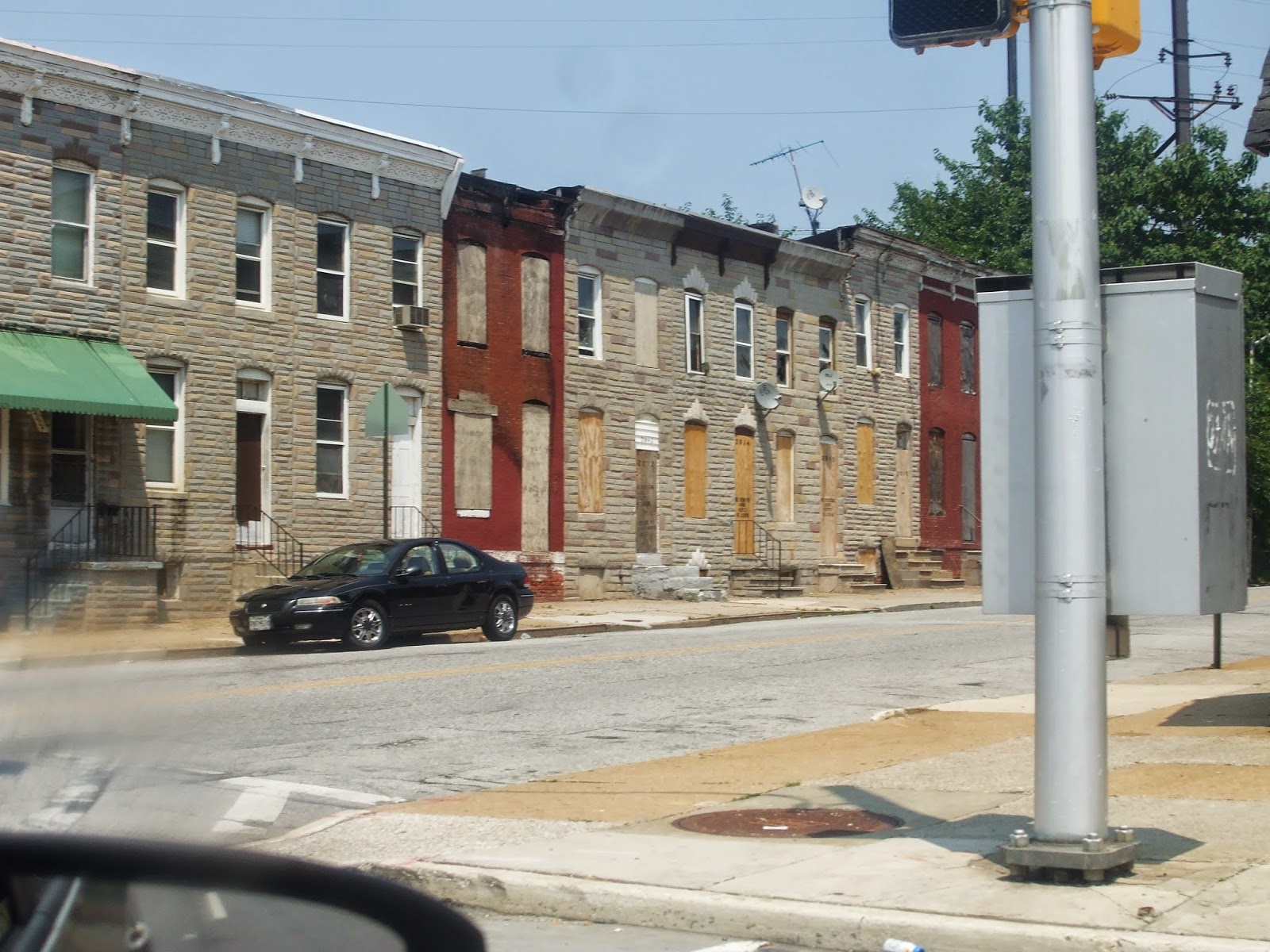 Another attraction along this area of North Avenue is the Greenmount Cemetery. I think this should be treated as one of Baltimore's famous public squares. Notice in blighted areas of the City like Union Square, Franklin Square, Madison Square etc. the blight stops at the area facing the square and some of Baltimore's most sought after Row Homes are an island of hope in a sea of blight. That being said, the area surrounding Greenmount Cemetery is in very bad shape. However there are a few signs of life in the Oliver Neighborhood directly east of the Cemetery in the form of newer homes. Older Row Homes however have not fared so well. This can be made into an opportunity to attract a mixed income community by bringing back the $1 Row House initiative. Although they will be symbolically buying these homes for $1 they must both occupy the home and qualify for a hefty construction loan to rehab their home. This would mark a substantial amount of money being reinvested into the Oliver and East Baltimore Midway Communities and create a welcoming area on all sides of Greenmount Cemetery. 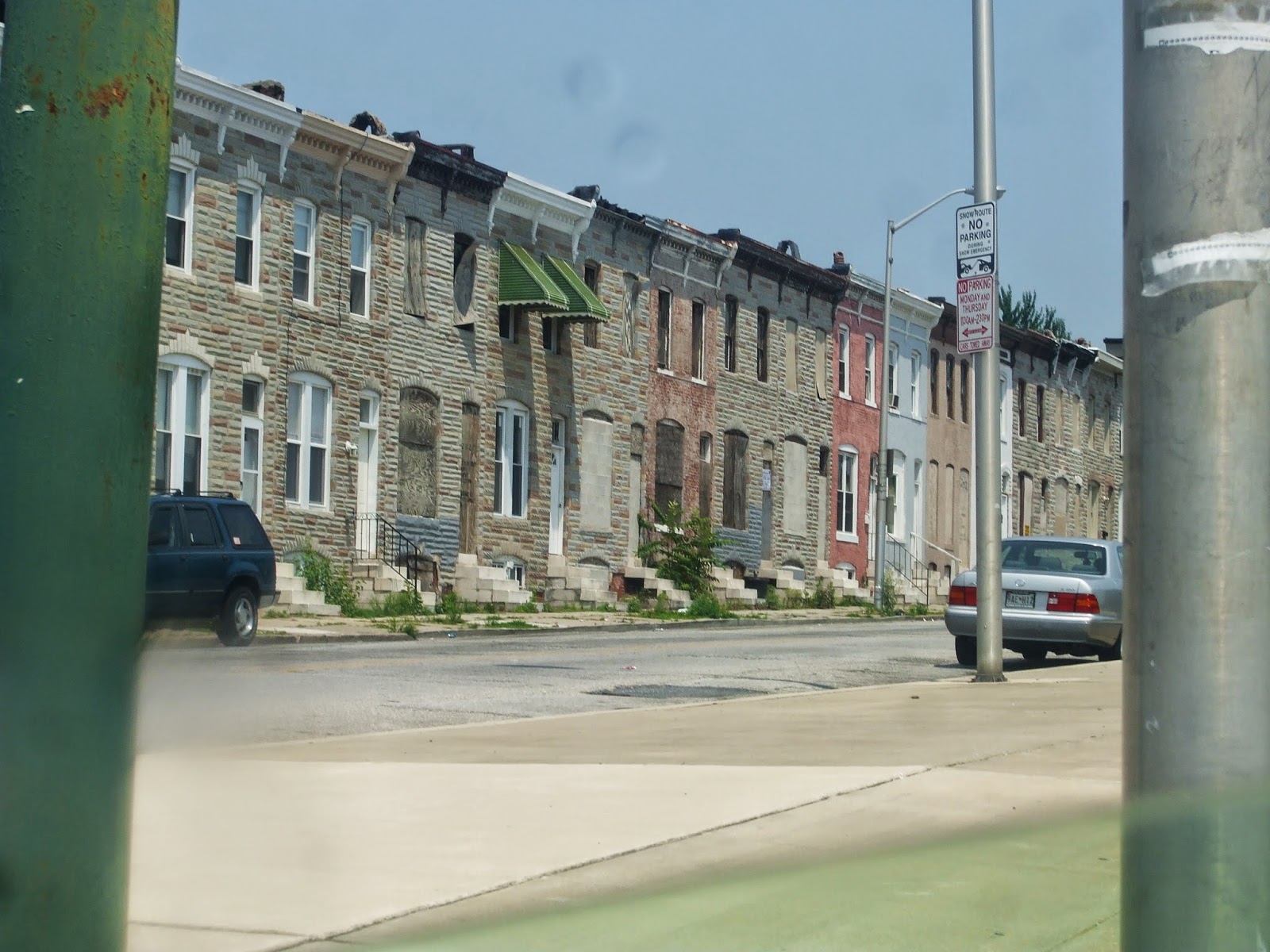 Further down North Avenue eastbound on the south side lies a community known as Broadway East. This is where the population loss of Baltimore is most evident with vacancy rates as high as 45% and that's not including vacant lots. Fortunately, Broadway East is just north of the Hopkins redevelopment area. This is where a lot of redevelopment must occur. I don't see very many of these Row Homes surviving which has been true for the actual Hopkins Redevelopment area. Although the Hopkins Redevelopment area has Retail/Commercial Space Master Planned into it, I would like to limit a redeveloped Broadway East to having North Avenue be the sole area for Retail/Commercial space. 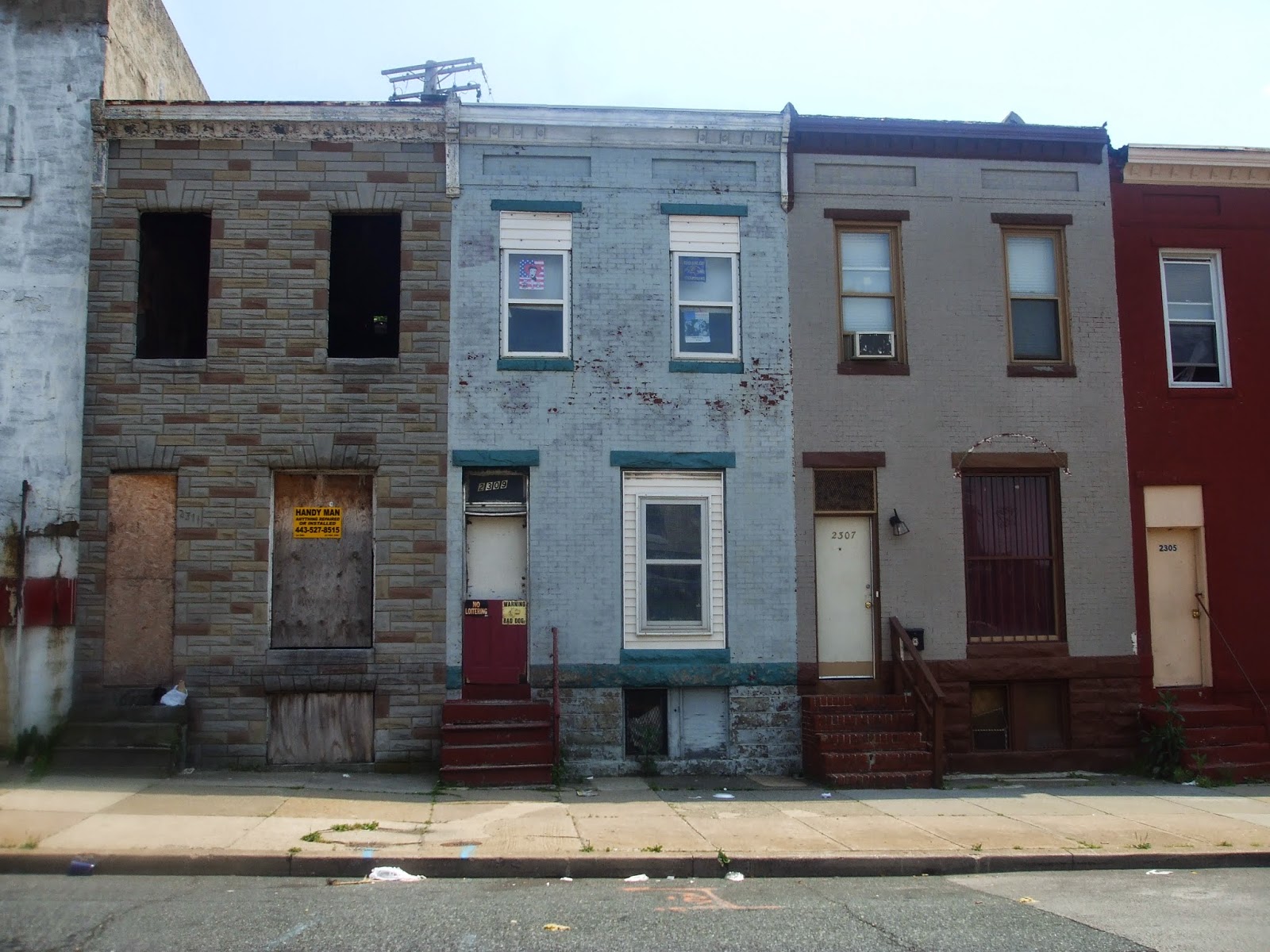 In the Broadway East Area of North Avenue there are a couple of areas that stand out to me and I think should be target areas. First there's the complex that contains the Eastside State Complex and Baltimore City Social Services. I think there should be a Master Plan of some sort created to redevelop this area and allow for higher density. I'm not exactly sure how I would do it but I think this can be made into a Mixed Use block that can spur further reinvestment along North Avenue. Next there's Harford Heights Elementary and William C. March Middle Schools. Both are located in a sprawling building on Wolfe St. between Sinclair Lane and Holly Cross Lane. I believe there are plans to build a new school that houses grades K-8 according to the School Facilities Master Plan. I would build a more compact building that would have Holly Cross Lane frontage and would allow for rows of new Homes to be built along the east side Broadway between Harford Road and North Avenue and additional homes along the north side of North Avenue between Broadway and Wolfe St. The last part of Broadway East is the boarded up building once known as "Ashley Apartments." This old Section 8 Apartment Building fell into disrepair in the 1990s and the Feds who owned sold it back to the City only to have boarded up to rot inside and out. I would love to see a rehab of this building similar to that of the American Brewery (pictured above.) Instead of housing the Offices of Humanim which the American Brewery does, I would turn Ashley Apartments into low income Senior Apartments. They will include Apartments spanning from Independent Living to Assisted living all the way to Nursing Home beds. They will be amenity filled with a 24 hour Police Substation in the front to curtail crime and provide safety for its Residents. Seniors who need assistance in the area will be first on the list to rent an Apartment. The Ashley Apartment Building is an architectural gem that must be restored. 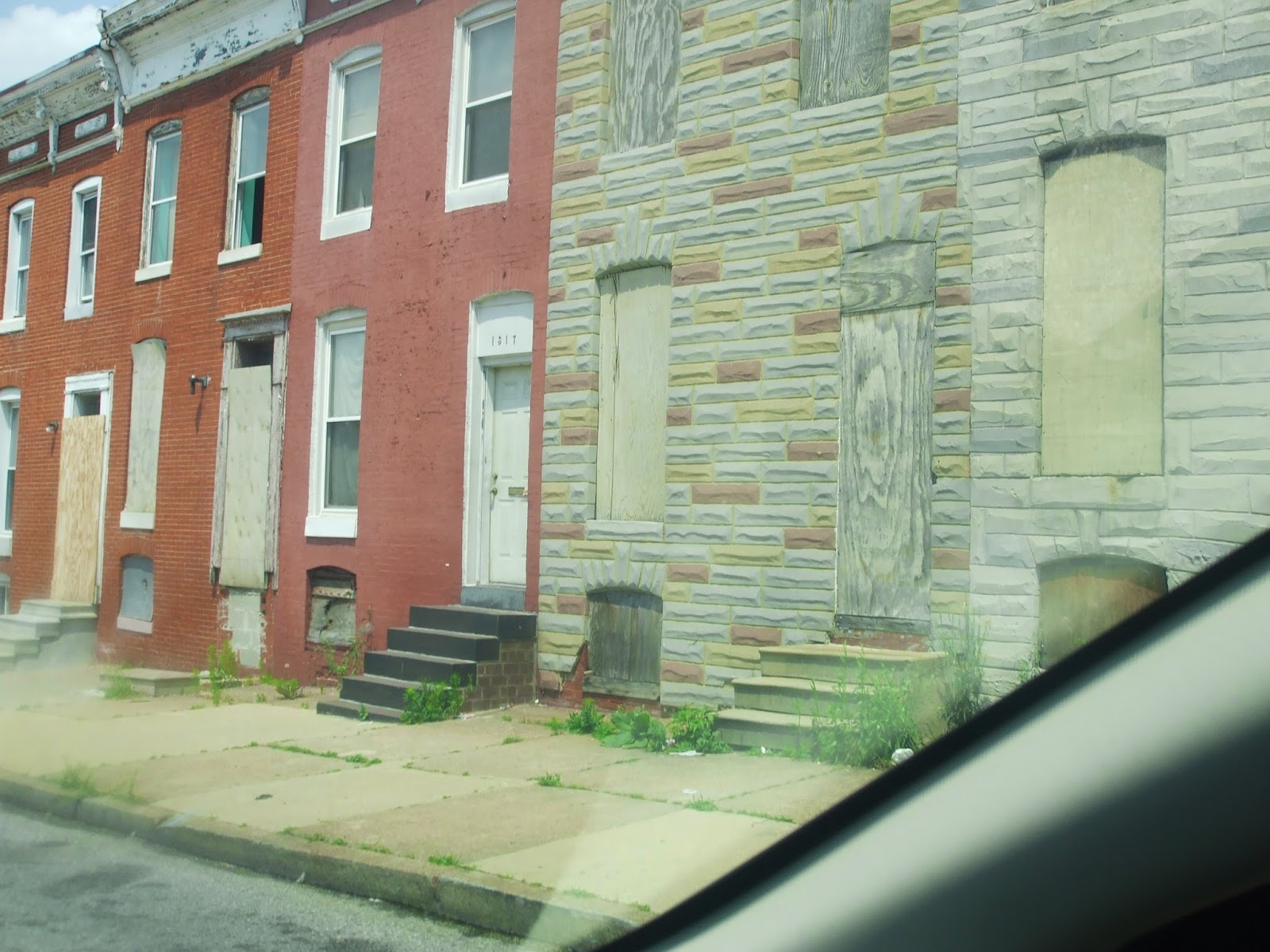 North Avenue minus a few blocks in Station North may appear to be completely blighted but looking eastward toward it Gay St. terminus, I see that there are numerous opportunities to make it the spine for reinvestment in Baltimore. Stay tuned for Part II that addresses North Avenue west of Station North.
Posted by Spence Lean at 8:06 PM

I just wanted to let you know, I really enjoy your blog and a lot of your ideas are very similar to mine. I am glad other like minded people are seeing what could be done with this city and I also like the historical info. you share that I would have never known, keep up the good work!!!